There are numerous blogs about SAP running High Availability but none of them seem to focus on explaining how the basics work.

What are the Basics?

To explain this in simple terms we should start from a standard Standalone SAP system. A standard system has 3 basic components, each of them is critical for the system to work:

3. Database -> The database is simply the database, your primary persistence and where you store your data.

So, what do you have to do to make your system highly available?… very simple, you have to give each of these components redundancy, covering all the single points of failure.

How do you achieve that?

Well, for the basic HA system you need at least two hosts (or nodes) to fit the required components, also ideally they will be located in separate data centers.

ASCS -> For the central services the recommended procedure is to use ERS (Enqueue replication server).  ASCS and ERS are installed on a shared disk in both hosts. Enqueue server will keep the lock table and ERS will keep a replicated copy of the lock table. A third party cluster software will provide an automatic failover mechanism for the ASCS instance. Now that the jibber-jabber is out of the way, what this means is that you have an ASCS and an ERS on each host so if at any moment an issue was to hit one of the nodes it would automatically failover to the other one keeping the system alive.

AS -> From the application server point of view the key is the numbers of them; at a basic level you need at least 2 application servers (PAS and AAS) using load balancing. If an issue hit one of the nodes all users connected to that node would be kicked out but users will be able to logon again as the other AS will be up and running.

Once finished your new HA system should look something like this, 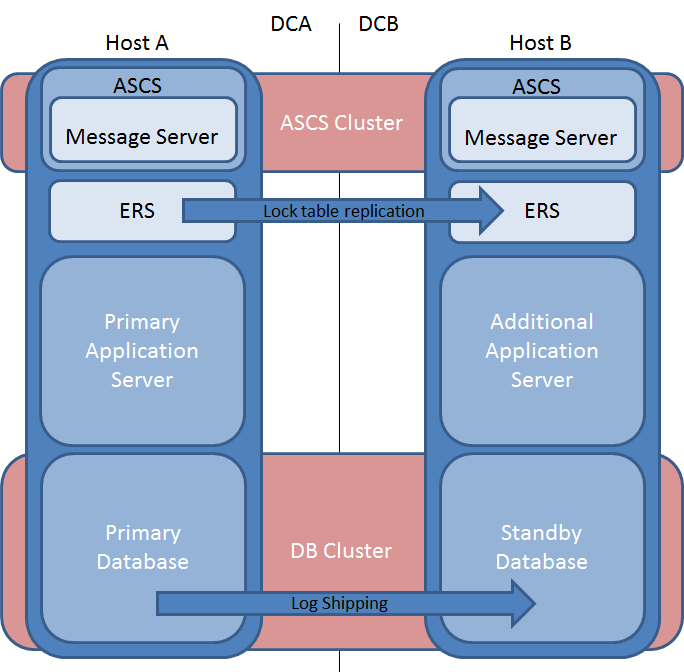 Now, What is a HA-Cluster?

The cluster get set with a virtual IP (and hostname via DNS), these are the details to be used on the SAP profiles to call that particular component. The Cluster will assign that virtual IP to the active node and use a heartbeat monitor to confirm the availability of the components, if the primary node stops responding it will trigger the automatic failover mechanism that will call the standby node to step-up to become the primary node and will assign the virtual IP to it restoring the component availability. Once the failed node is fixed it will come online as a standby node.

A High Availability database will look something like this: 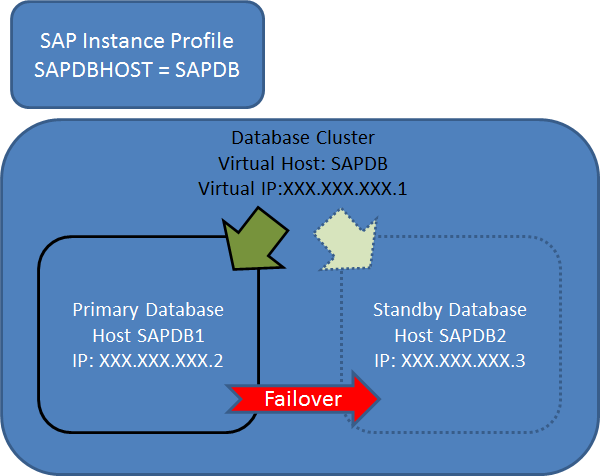 Yes, you have a HA system now!! … if there is a problem your system will be able to withstand the loss of one of its components or even an entire host.

No, you need to make sure everything that talks to this system is using load balancing. I cannot stress this enough, if the rest of the landscape and third parties are pointing at a fix host you will end up out of business… so, it’s very important to make sure that all the RFC’s, JCO’s and GUI’s are set to take full benefit of load balancing.

Hope this was a good overview of a basic HA system.

PS: This is a very basic case scenario, if you use ICM or the SAP Gateway you want to make sure you use an SAP webdispatcher and a standalone SAP Gateway to load balance those requests too.

PPS: HA differs drastically depending what OS and Database you run your landscape on, also there are several tools available for virtualised environments.

Love to hear your comments,

The Message Server does not handle requests to a work process...

The Message Server acts as the load balancer for SAP GUI and RFC connections.

In addition, it is also used by the Dispatcher process of each instance (PAS and AASs) so the instances can communicate with each other.

Updated the blog to add a definition and explanation of a HA-cluster.

You always inspires us in SAP BASIS world ..!!

User1 working on Host A and this host get shutdown, then if User1 log in Host B would they able to access same screen ?

Unfortunately once an application server goes down the sessions are lost and so any uncommitted transactions.

The application locks are replicated to ERS. In your case if HOST A goes down and when the Enq

same screen where the lock was already placed on HOST A.

Most posts on this subject are terrible.  Thank you for writing this in human-readable words.

Simple and clear explanation , thanks a lot

Your blog is really awesome, Thanks for sharing you knowledge.

Here i have one small doubt,

When we are installing ASCS on cluster package/resource by using VH(Virtual host) on NODE -A, what is the need of installing same instance (ASCS) on NODE B????

In case NODE A fails, cluster packge/resources will get moved on to NODE B along with VH, all the ASCS services will available to the user, though they are switched on to NODE B(But only thing is that user active session will get terminated when ever switch/fail over occurs).

When all user requests are bounded to NODE -A ASCS all the time, then what is the use of NODE-B ASCS.

Will you please clarify my doubt.

We have done this setup but now we have an issue in the monitoring setup.

how do we tell Solman that the SCS instance is clustered?

I think so, its the same scenario as when you have a clustered database

Quick question: In the SAP ABAP installation guide for HA in Unix, it says to install ERS with virtual host name. I notice the same thing in sapinst initial screen as well. If I understand correctly, ERS will maintain a copy of the lock table held by enqueue which is part of ASCS. Since, ASCS is installed on a shared disk, ERS should ideally be installed on both cluster pair using host name (not virtual host name) and into local file system rather than a shared file system.

This is How i did in Windows. Let me know if there is any difference between Windows and Unix installations?

I'm confused about the ERS.

In my understanding a ERS connects to the enque server and replicates the enque table. But it is not running on Host A and B at the same time - right?

No Enq Server won't be running when there is a failover of in the ASCS. Only the msg server component will be started on the Enq Replicator Server Host.

Could not get better and easier explanation on HA  than this. Very helpful for the beginner who are learning these concepts. Thanks a lot Juan Reyes.

I have experienced all the same as you have described above in practical. I have one query that in a distributed scenario where (PAS + ASCS) is on single host and Database on another Single host. Do I need to install ERS server on (PAS + ASCS) host. There is no High Availability.