SAP BW Land-Scape of Systems for the Upgrade.

Landscape of the System:-

We first need to analyze the Current Landscape of the System. Generally it would be like this ,however let’s assume it to be as below.

Lets try to understand few of the Upgrade jargon’s like SAP Landscape, Development Freeze ,Transport Freeze, Transport Route During the upgrade, Sequence of Upgrade of Systems. Optional Systems:- Every client may not have the below systems

After we study the Landscape , based on that we will do the Sequence of Upgrade and the Impact as below, 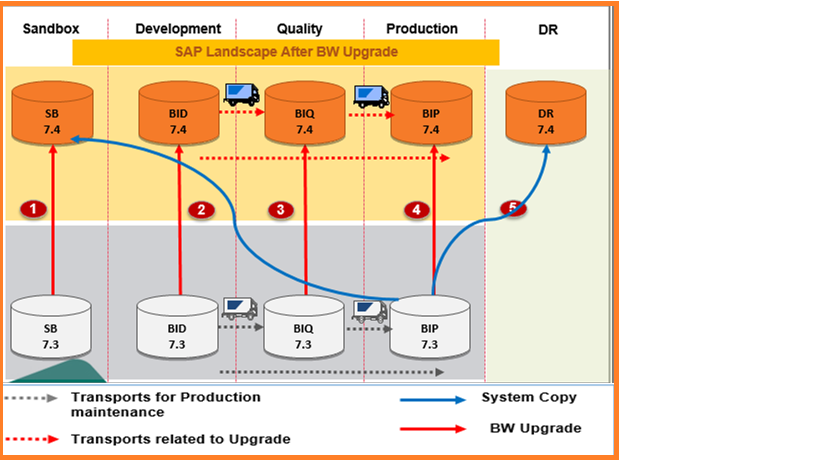 Case 1:-During this phase ,there will not be any Developments happening in the system as the Development system itself has to be Upgraded to a Higher Version and the system would be taken by Basis team for the Upgrade. So here we enter into Development Freeze.

Case 2 :-Sometimes to Minimize the Development Freeze period , another Dev system-D2 is created which would be a Copy of old Dev-D1.The D2 will get Upgraded first while D1 functions Normally. However all the Development will have to done in the D2 system manually post upgrade such that the Systems are in SYNC. Once D2 is Upgraded, it will connected to QA system and other Source systems post which D1 will be removed from that Landscape.After this step , QA is taken up for Upgrade thereby reducing the Dev and Transport Freeze Period.e 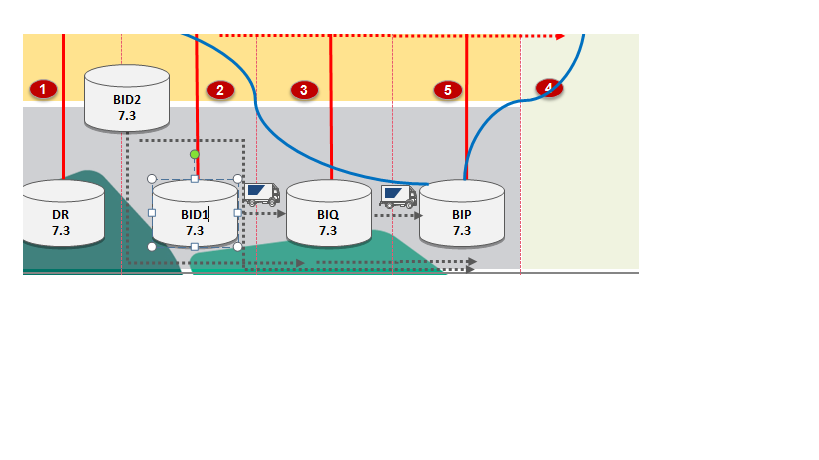 Transport Freeze (Step 3) :- During this phase ,there will not be any Transports happening in the system as the systems will be of different Version, say Dev system (Upgraded) may be on a Higher Version and the QA System would be on a Lower Version (Older Version) and its not recommended to Move Objects from higher version to lower version.

There will be Development Freeze , When Dev system is being Upgraded. The QA system will be Opened for all Emergency Developments/Changes will happen in QA along with the Testing. The Objects will move from QA to PRD. However all Objects developed in QA system will have to Recreated manually in Dev system, post upgrade such that the Systems are in SYNC .This Rework would require extra time and there are chances of missing out on Exact replication of Objects.

When QA Upgrade Starts ,till the End of the Production Upgrade there will not be any TR movements. However the Developments will happen as Dev system is Open and TRs can be collected.The Development freeze would be lifted and transport Freeze will still be there.

When Production system is Being Upgraded, the Dev and QA systems would have been Upgrade and on same Version hence the Development and Testing can happen but TRs can move till QA ….but can move to PRD only move after the Upgrade.The Development freeze would be lifted and transport Freeze will be partial.

Post Upgrade the Normal TR movement will resumeas below,

Note :- Based on my Experince i have shared the Upgrade Land Scape Sequence,however it may vary based on Client/Basis/BW/SAP recommendations.