“Racing with machines“ – the impact of digitalization on our work life

The golden batch, or catching deviations

I wrote about the golden batch, the perfect run in a past blog.

Companies in the mill industries achieved good results by applying technology, e.g. SAP Manufacturing Intelligence & Integration, as a means to highlight deviations from a best practice for producing a specific grade or product. These best practices constantly evolved by benchmarking.
As I said, there is a significant opportunity to optimize. But this will only get you ahead in incremental steps.

At the SAP Conference for Mining and Metals, I had a very interesting conversation with a CIO. He took a quite radical digitalization approach: He claimed he would like to use robotics to automate all back-office work rather sooner than later.

I prefer the approach highlighted in “the second machine age”.

The “second machine age”, or racing with machines

The authors Erik Brynjolfsson and Andrew McAfee highlight the strengths of machines or robots, against those of humans – and give a few very interesting proof points that the most successful is a smart combination of both strengths. For those interested in the breadth and impact of digitalization on factories and employment overall, I recommend reading the book.

The two examples that I found most impressing were the “Amazon Mechanical Turk”, and “Advanced Chess”.

Manufacturing, asset maintenance, or quality management are of course not chess. The pattern is valid none-the-less.

Creativity, out-of-the-box & divergent thinking is (still) a strength of human workers. The same is valid for many non-routine pattern recognition problems. Combining this with Industrie 4.0 or IIOT technology, big data & machine learning will be the challenge – and will require a different skill-set for workers, and an adequate set of tools. Asking the machine (or the MES, or Big Data predictive analytics) the right questions, or analyzing root-cause and correlations for optimization & innovation potential, will require a human worker for the foreseeable future.

A basic understanding of data science – like understanding causality and correlation, or the reliability of predictions – is for sure helpful to have a  “future-proof” skillset. At the conference a keynote speaker emphasized the T-shaped profile of future experts: being a deep expert in just one domain (be it IT, engineering, or business process) is important but no longer sufficient. You also need the “disposition for collaboration across disciplines”.

Racing with apps, like SAP Smart Business, combining best of both worlds

There are good examples for applying this pattern “best of both worlds” in SAP’s S/4 HANA and SAP’s boardroom of the future.  S/4 HANA provides so-called Smart Business Cockpits that combine analytical machine smartness with human decision power.

For example, the Smart Business for MRP identifies material shortages, calculates several possible options (and their implications) and renders the decision alternatives beautifully to the human MRP planner.

Along the same principles, the “HANA-machine” in “Smart Business for sales order fulfillment” identifies potential sales order issues and their root causes. It’s then up to the human to take a decision, call the customer, or collaborate with humans in other departments (via SAP Jam) and thus play his or her strengths.

We will have to see whether I can convince my kids to „like“ statistics. Creativity and out-of-the-box-inventiveness seem to be a lesser problem.

How far have you embarked on this journey? Where do you join machines and humans to achieve better results? 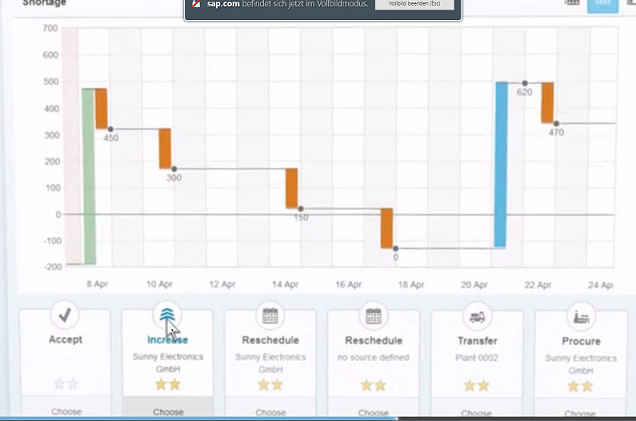