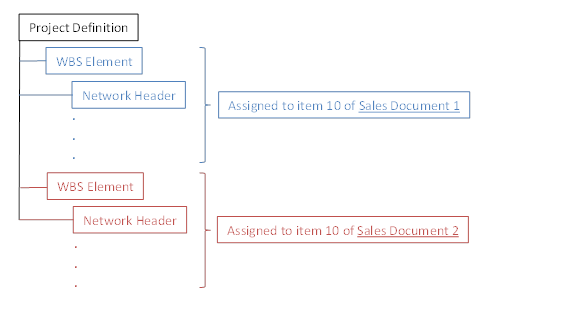 Analysis of the standard behavior of the system

The underlying principle of this enhancement is to create an implicit enhancement implementation at the end of form TABLES_STANDARDPSP_INIT (called inside function module CJWI_PROJECT_NETWORK_ATTACH) and change the value of variable REPLACE_STRING to a value coming from a customer field at sales document header level (table VBAK). All sales documents that should be grouped into the same project definition would then have a common value filled in this customer field. An example of code would be as follows:

* assumption: there is an append in structure VBAK containing a field called ZZALTVBELN. This field is maintainable in the sales document processing transaction (i.e. VA21, VA01, etc).

Maybe the most prominent application of such an enhancement is in inter-company projects scenarios in which different companies from the same group work on the same project, but due to legal reasons manage their own contracts with their own sales documents. The reason why different contracts from different companies within a group should be managed below the same project definition could vary from simple reporting requirements to more complex requirements in the areas of result analysis and period end closing.

It is important to highlight that the enhancement proposed in this document only works in case only one project structure is to be created for all sales documents involved (i.e. flag “SD/PS assignmt” – field PROJS-FLGSD – is NOT set in the standard project definition). For creating cross-sales documents projects with multiple substructures another enhancement is required. This enhancement will be posted in the upcoming weeks.