What is this Internet of Things, everyone is talking about? Young Thinkers present Touch IoT: IoT for Non-Developers at the IoT Info Day

We were pleased to demonstrate the  SAP Young Thinkers IoT module under the slogan “Touch IoT: IoT for Non-Developers” at the SAP-internal IoT Info Day on July 13th organized by Tanja Rückert and her team.

Today, IoT devices are nearly as common as sand at the sea. We get in contact with them every day in our smartphones, parcel delivery, health care and many more. However, these devices mostly have inaccessible hardware and all processes occur behind closed doors. What we get to know is the buzzword IoT which is used frequently but also quite squishy.

This is why the Young Thinkers Network in person of fellow Claudia Loff and working student Jadga Hügle headed out to let more than 1200 registered colleagues (and many more visitors on their way to the lunch) touch IoT and turn its “magic” into understanding.

The Young Thinkers IoT module was originally built to explain the world of IoT to teenagers. However, the scenario is perfectly suitable for all IoT beginners. Consisting of an Arduino Nano microcontroller connected with a potentiometer and LEDs, software built with SNAP4Arduino and an upload function to the HCP IoT Service, the module unites all essential parts of IoT – hardware (“the thing”), software and the cloud. Providing a simple predictive maintenance scenario with an adaptive front-lighting system, the module eventually makes IoT and its possibilities understandable for everyone.

Due to its accessible and comprehensible hardware, the colorful graphical but powerful programming environment and the demonstrated business scenarios, we could attract a lot of visitors from different perspectives. Sales and marketing experts, developers with few hardware background as well as parents, wanting their kids to get to know hardware and coding in a playful way, were inspired to reflect and refine existing application scenarios or even develop their own use cases.

Following Claudia’s words: “It is about explaining complex things simple.”, we were glad that we got the opportunity to enable colleagues to easily understand IoT and actively take that knowledge into future IoT discussions.

Also our workshop „IoT for Non-Developers“, taking place in September and October, was met with enthusiasm. You want to learn how the Internet of Things works and explore its possibilities? You are interested in tinkering with hardware and controlling your “Thing” with your own commands? Then you are welcome join us in our workshop. Contact us at uasupport@sap.com and we will send you an invitation.

We are looking forward to see you at our workshop or the next Young Thinkers booth. 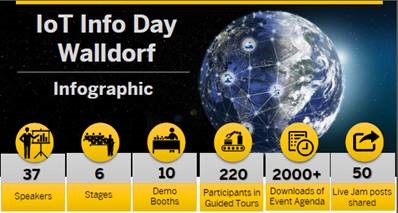