As we know Netweaver & System Landscape Upgrades in true essence can often present big functional changes to our end-users bases especially when it comes to functionality and operational display. If you are utilizing the Universal Worklist (UWL) this means that from the end-users perspective you are interacting with the Enterprise Portal (EP), UWL (GUI) and subsequent workflow screens. Noticing a change in such a display whether its operative or rendering based can be quite alarming especially if you are involved in managing sales order request or travel expenses 🙂 .

A common occurrence is the disappearing of the footer menu bar within the main UWL Navigation View. This usually arises post upgrade also and despite having the Footer value set to “Visible” from a configuration standpoint it fails to appear.

Why is the Footer not visible?

In relation to the footer itself over various NW Versions as we all know change is something of a normality. The Footer itself is part of and contained within the “Page Navigation” element which no longer exists for ALL NW 7.10+ Versions onward. In simplistic form the Footer has been removed from the UWL’s UI.

As touched on above the Footer is now no longer running in association to the UWL. Instead a new functionality was introduced in the form of a scrollbar thus allow users to view and manage all workitems and task type within a singular page display. 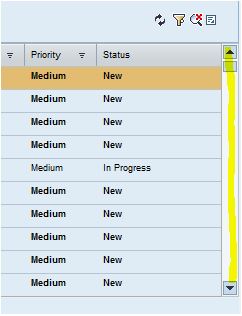 Perhaps the most commonly encountered scenario from my perspective is the issue pertaining to the UWL Core Decision Buttons going missing. Ordinarily this may occur as a result of a recently performed upgrade and end-users may notice peculiar behavior such as “Shopping Cart” Approval Buttons not being displayed within the UWL Preview Area.

Where have the Decision Buttons disappeared?

The answer to this question is quite simple and comes down to version display changes.  The UWL UI (User Interface) was changed within NW 7.10 and all following higher releases. This simple means that the “look and feel” of the Universal Worklist itself is different in all versions after 7.10. Some of the buttons have been removed from a functionality aspect and some of the buttons have been changed in terms of their operation i.e. how they are accessed.

XML files and a key property which is labelled “<Property name=”showButtonInPreviewArea” value=”yes”/>. 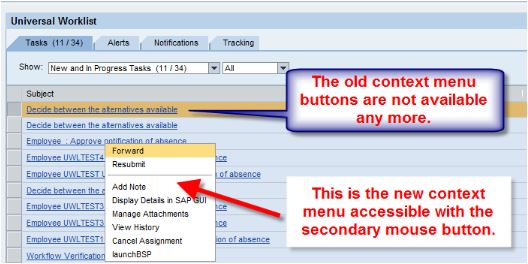 Now as we mentioned the property is showButtonInPreviewArea is key here and needs to be added to the XML in order to get one or all of the desired buttons to display.

Now regarding the UWL and XML I need to highlight some important points. With the UWL when you make changes to XML files there are two key principals which need to be followed:

Low priority files in the UWL are the ones which come with standard UWL right after installation, and also the ones retrieved from the back-end systems which the UWL is integrated with. Meaning that if you want to modify any definition which is located in the uwl.webflow file, I would advise you to create a new XML file as a copy of the uwl.webflow, modify according to your needs and upload it to the UWL with a different name, and the desired priority.

This means that you can upload your changed file and UWL should consider it as soon as you have uploaded it. As soon as you changed the XML so that to have the actions showing as buttons (by adding the showButtonInPreviewArea property to the

actions) and uploaded the file to the UWL, it should be taken into account since the very first access

If you seek further consultation regarding the buttons you can find a comprehensive overview in my dedicated blog posting which also covers a sample XML upload.

Customization of the UWL

Remember that if you need to tweak certain aspects of the Universal Worklist or Add/Remove functional options this is indeed feasible. As Product Changes continue to bring about evolved functionality the notion of customization will always remain in order to support optimal performance to specific organizational requirements and business operations.

A starting point of reference for UWL Customization is the following SDN article and if further consultation is every needed feel free to reach out to me for guidance.

Changing the Look & Feel of the UWL UI