To support Data Provisioning while taking SAP S/4HANA system as the source, with current version (SAP S/4HANA On-Premise 1709), 2 source types are available as listed below:

This blog aims to explain these 2 source types including how-to guidance, but will not go into details of SAP BW DataSources, ABAP CDS, or S/4 HANA Embedded Analytics, etc.

Customers can extract data from SAP S/4HANA 1709 to their own BW-Hub using the BW extractors delivered by SAP. In some areas, extractors have been deprecated or can no longer be used with SAP S/4HANA 1709. The extractors related to deprecated functionality, or Add-ons etc. that due to S/4HANA simplification will not be available after conversion, and accordingly the downstream ETL, modeling, queries will be also affected. Meanwhile, customers can simplify traditional BI, and utilize S/4HANA embedded analytics for instant insight-to-action operational reporting. Please refer to the general restriction Note 2491467 for SAP S/4HANA 1709. There, restriction notes of multiple areas are listed which contain the list of no longer available BW extractors.

DataSource adjustments might be required to comply with changed Scope and data structures within SAP S/4HANA 1709. This needs to be verified on customer-specific basis. For example, in SAP S/4HANA the material number was extended from 18 to 40 characters for moving SAP DIMP to core. After the upgrade to SAP S/4HANA all DataSources in the source system are deactivated. Thus the metadata of the DataSources must be replicated to the central SAP BW system again (TA RSA1). Consequentially the persistency tables in the SAP BW staging area are extended to 40 characters.

For very basic scenarios, the S/4HANA database interface layer of NetWeaver redirects all extractor related SELECTs to compatibility views (proxy objects are in place for objects like MKPF, etc.), which retrieves the same data based on the new data model (ACDOCA, MATDOC, and backup tables like xxxx_BCK, etc.) e.g.: 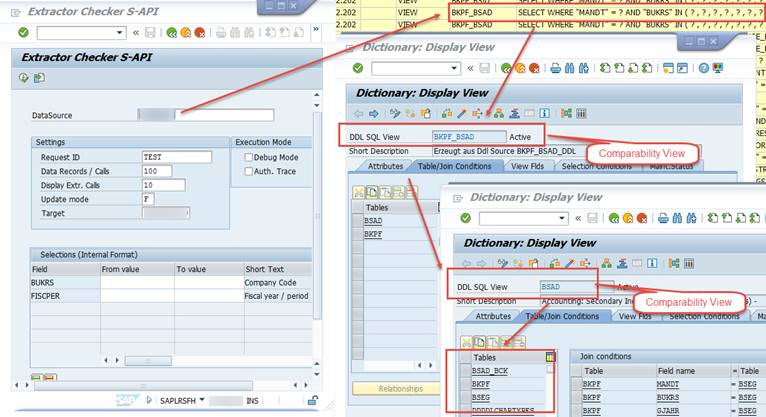 How to check available DataSources in the system: 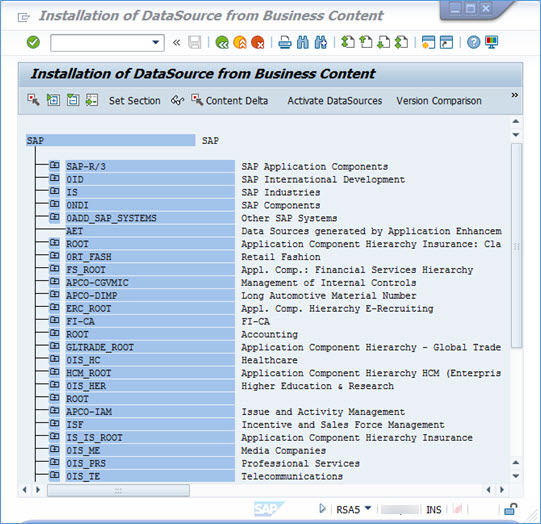 The analytics programming model of SAP S/4HANA is based on Core Data Services (CDS) views and the accordingly pre-delivered semantic layer as Virtual Data Models (VDMs). The virtual data models are also used for transactional or search uses cases and aims to fulfill on-premise and on-demand qualities. A complete Analytics solution also requires Data Provisioning capabilities to support scenarios such as central EDW, Data-as-a-Service (DaaS), Mobile Offline apps, and offline Analytics like with Lumira Desktop. The CDS views provided with the virtual data model can also be used as basis for Data Provisioning.

CDS views for Data Provisioning shall be annotated with “@Analytics.dataExtraction.enabled: true”. 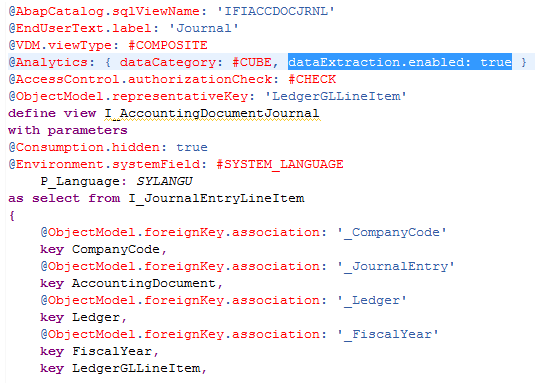 Via this indicator the application marks those Entities that are suitable for Data Provisioning. This ability is typically lost on the level of consumption views where joins, procedures and aggregations “blur” the relation to the primary data (especially data replication including calculated elements leads to wrong query results in the target system). To avoid additional data modeling outside VDM for the data provisioning scenarios, a logical sub-layer in the CDS reuse layer should be redundancy-free, but still complete from the business perspective. For each reuse view which is part of this core layer, it is decided from a technical (performance, …) and semantic perspective, whether it can be also released for extraction use cases mentioned above. All views with an analytical data category of #FACT, #DIMENSION, #TEXT, #HIERARCHY are also suitable for Data Provisioning.

With the name of an existing CDS View or S/4HANA ‘eliminated’ table, several approaches could be used to check the detailed DDL definition of the (underlying) CDS View. From there the dataExtraction.enabled property can be checked further.

An overview of useable approaches per the type of object could be found in the below table. Detailed explanation follows afterwards.

SAP BW is designed to consolidate data from different source systems and provide a harmonized view for reporting. For this SAP BW supports various tools and concepts, e.g. different staging areas and data sources for each system that needs to be integrated into the central reporting.

From release BW 7.5 SP05 powered by HANA (BW/4HANA SP01), ABAP CDS views can be used for Data Provisioning. Two typical scenarios are included in this option for your reference:

2) Delta extraction from a CDS view to BW

Other use cases are not included at this moment.

Scenario 1: Direct access to a CDS view from BW

In this scenario, the ETL procedure is to extract data from SAP S/4HANA to SAP BW via a dedicated ODP (Operational Data Provider) source system type as below: 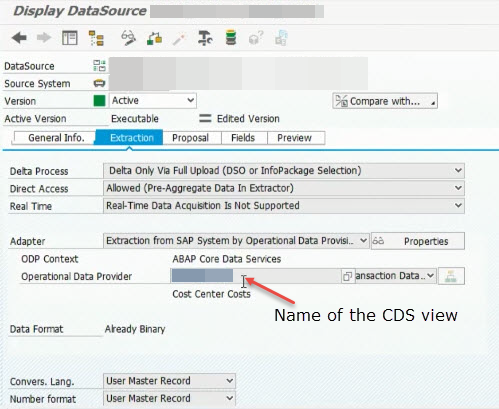 Scenario 2: Delta extraction from a CDS view to BW

If the main table of the source CDS view is large like the ACDOCA table in S/4 HANA, extracting the data as full load or using direct access to BW are not recommended. In this case, delta mechanism is preferred whereby only ‘New’, ’Changed’ or ‘Deleted’ records are extracted periodically. CDS views enable delta extraction via delta element annotations. These delta element annotations then require a delta element or a ‘pseudo delta’ field to be defined-typically a last changed timestamp on the record. Below is the process of delta extraction from a CDS view to BW.

Refer to below the solid SAP How-To Guide for implementation:

How to use ABAP CDS for Data Provisioning in BW

The other way around, is to integrate the underlying database views of the CDS views. Below is the typical scenarios can be referenced

How to load data from S/4HANA into BW via SDA 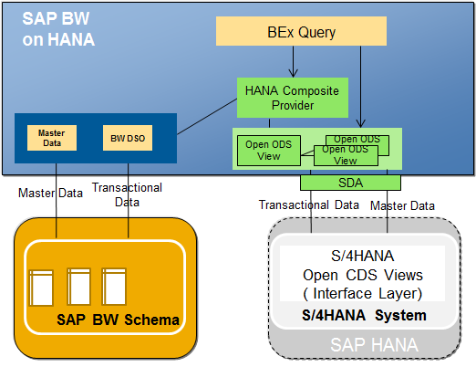 Thank you for reading!

Many thanks Gavin for sharing this

The ABAP CDS View can also be created in the HANA studio in the ABAP Development perspective. The idea is to use ABAP CDS views when we have a single environment of S/4HANA. For example, if we have BW embedded in S/4HANA the idea is to do only operational reporting and therefore use ABAP CDS views.The existent BW is not meant for EDW.

If further insight on business is required, then a BW in side-car with S/4HANA should be used. This BW can direclty use the operational data from the ABAP CDS view through an OPEN ODS VIEWS and merge it with data from an external source for example.

In case I want to extract a CDS view to a native HANA target without any BW, what would be the extraction process?

How do I use ABAP CDS view to move to data to a completely different DW say MS SQL Server or HDFS ? If SAP DS (Data Services) can connect to ABAP CDS (say via ODP) then problem is solved.

Do you know if that is possible ?