Most of the popular reporting tools can handle cumulative sum or running total , but still there have been lot of posts in SCN about whether it is possible to do it in HANA itself.  So, just wanted to see , if it can be easily done via Graphical Calculation view and it seems to be working .

Conditional summation – If in Calculated column

Note: This might still be easier to do in Scripted View or Reporting Tool .  Scripted Calculation View is deprecated now, instead use Table Function . 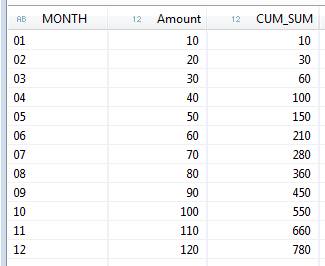 Figure 1 : Base data and result

Figure 2 shows overall design of the calculation view.  It is pretty simple one, isn’t it ? 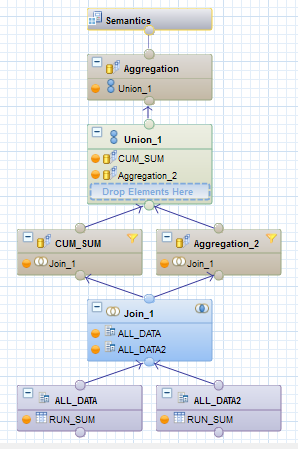 b) Created one Calculated Column “DUMMY” on each projection and assigned it a value 1 .  You can assign any other constant value .

c) In join node ( JOIN_1 ) ,(inner)  joined these two data sets via ‘DUMMY” column  .  After joining output would be like below 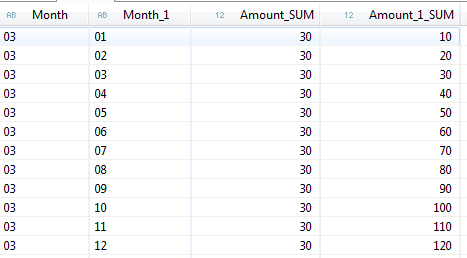 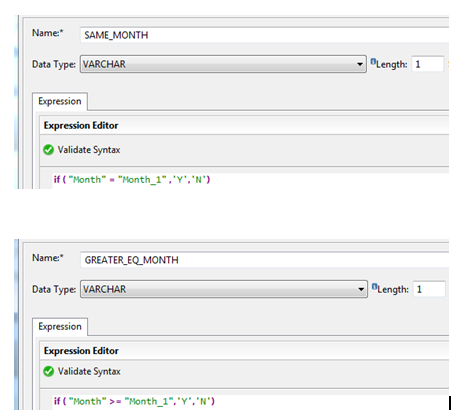 d) Now, I have two aggregation nodes. One with filter SAME_MONTH = “Y’ and another with GREATER_EQ_MONTH = ‘Y’ .

I took Month and Amount_1 and renamed Amount_1 to C UM_SUM .

Took Month and Amount with a Filter SAME_MONTH = ‘Y’ .

e) Lastly , we need to union these two aggregation nodes.  Take Amount from one node and C UM_SUM from another node.

Result is in Figure 1 itself

Note: Model can be much more complex based on number of characteristics you take, in my case it was only Month . If you really want to go for this approach ( have enmity with script or coding 🙂   ) , do not use the base tables in JOIN_1 . Use this model after you aggregate data to a certain extent.  Obviously , you would like to avoid a join m X m where m is a large number .

Equivalent SQL Code would be as simple as below . We can create a Calculation View ( Scripted) or  Table Function using this SQL .

Or you can use Window function for better performance

SQL in Section c running against a table with 1.3 billion records and I get the results in 40 micro seconds

Note: This might still be easier to do in Scripted View or Reporting Tool .

Thanks for the feedback. It is good to get feedback from experts like you .

Wanted to see if this can be done without a piece of code .  I shall add equivalent SQL code to achieve the same .

I see SQL Code and Graphical Calculation view both are creating  Nested Loop Join . Does system understand what I am trying to do and creating Calc Scenario intelligently ?

Here is part of PlanViz . Please shed some light here .

From what I can see you decided to implement the cumulative sum in SQL in a very similar fashion then what you did in the calc. view.

The scalar subquery gets rewritten into a join and that's what you get in PlanViz.

A more efficient approach to ***. sum is to use window functions instead.

I liked this approach for calculating the Cumulative sum which I am using in Hana but my concern is I am dealing with the millions of records whenever the Query is run it goes back to the 1 st record & start calculating the Sum based upon the Amount .

Hope that clears what I am trying to implement

someone try to add more dimension (with some cut-off dimension) to the model and can help me?

have you or anyone tried with multiple dimensions? I could get them added using the windows function by grouping these dimensions, but it seems that if in that particular month, there are absolutely no data for a dimension value such as plant 1001, the existing cumulative value for previous month does not roll up to that future month.

I would expect another record for Feb 2017 where Plant 1000 = Value 500 being brough forward from previous month.

The syntax i am using are example below