Out of necessity and opportunity, China and Germany are crossing their national champions to create a new species of innovation.

Recently in Shanghai, a colleague surprised me with an after-work feast of crab dumplings. He also gave me some needed training on how to avoid burning my mouth on the boiling broth inside. Being of German heritage, I grew up to the taste of fresh dumplings at family get-togethers, and I still can’t resist the freshly cooked ones. You are probably wondering, China and Germany? What’s the catch? Turns out that China and Germany have much more in common than dumplings and cabbage, and are increasingly delivering innovation to the table based on projects between their national champions.

It takes two to tango

Both countries are currently engaged in a lively tango at the diplomatic, cultural, economic and technological levels. To underscore this, in a recent visit of German Chancellor Angela Merkel to Beijing, the media showed her and Premier Li Keqiang of China in a harmonious pose in front of the lake at the Summer Palace. 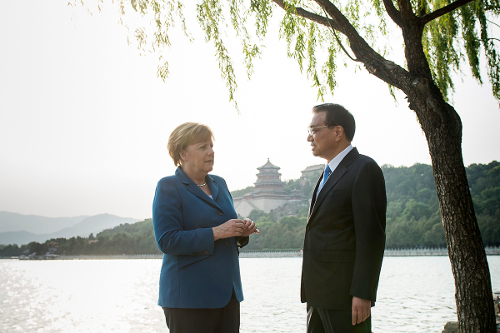 Granted, the offer by the Chinese conglomerate Midea to buy a majority stake in German robotics champion Kuka is ringing alarm bells in Berlin, but this example is also confirmation of the huge stakes involved and the strong business potential if the two countries cooperate on innovation.

Partnership indispensable for both sides

According to Benno Bunse, CEO of Germany Trade and Invest, Sino-German partnership has become indispensable for both sides. Germany is China’s fifth largest trading partner as well as its most important in the EU. China is Germany’s fourth biggest trading partner and its most important in Asia. Bilateral trade between Germany and China has nearly tripled in the past decade, up to 163 billion euros in 2015, with the German automobile industry driving the majority of investments. Bunse quoted from the China Daily: “Our economies are highly dependent upon each other.”

Which explains why Merkel was accompanied to Beijing last week by a delegation of ministers and business leaders to hold intergovernmental consultations on topics of economic and technological importance to both countries.

Industry 4.0 – the fourth industrial revolution – represents the complete digitalization of manufacturing processes from order to delivery, and combining the latest developments in Internet, mobile communications, IoT, Big Data, and social media. Germany and China currently have national programs in place to deliver new solutions on the basis of Industry 2.0 (“Made in China 2025” and Germany’s “High-Tech Strategy 2020”) it is therefore one of the areas earmarked with the greatest co-innovation potential between the two countries.

As the world’s factory, China has must maintain the efficiency of its factories or risk losing business to emerging markets with lower production costs. Enter Germany, known for its hardware and software to integrate business processes with the digital economy, and looking for strong partners to maintain its market leadership. No wonder then, that leaders in Berlin and Beijing are encouraging their national champions to co-innovate on globally competitive Industry 4.0 solutions. Case in point is an Industry 4.0 technology showcase which models a manufacturing line created by German-based SAP and the Shenyang Institute of Automation (SIA). Angela Merkel and her delegation traveled to Shenyang, China in the middle of the country’s rust belt and manufacturing region to prove that German companies can successfully innovate together. During the showcase, Merkel showed great interest and wanted to know more about how the production line works, and what roles each partner played in its development. The production line, once implemented, would digitize, integrate and automate all of the processes necessary for the order, manufacture and delivery of a customized product down to a lot size of one.

SAP Labs China Managing Director, Dr. Ruicheng Li, who has studied and worked in Germany and has a deep understanding of both cultures, has established the customer circle program to drive co-innovation projects with best of breed customers and partners from the Chinese market. Ruicheng is quick to point out that the solutions developed in China are not only destined for the national market, but also for SAP customers worldwide. “SAP chose SIA as co-innovation partner to build the industry production line because of its leadership in robotics and production line control systems,” says Ruicheng, noting that some of SIA’s innovations have landed on the moon. In turn, Haibin Yu, President, SIA, said that SAP is revered as a partner for its global footprint, experience, and long-term strategy.

SAP recognized early the importance of China as a R&D location, establishing its first center in Shanghai and Beijing in 1997. Today, SAP employs approximately 2,500 people in seven development centers across China – its third-largest R&D location globally, and a key contributor the company’s network of 14 development centers worldwide. “Over the past 20 years, SAP has built up trust with its Chinese counterparts, and has also acquired a deep knowledge of the business climate and that allows us to make a difference with our customers,” says Clas Neumann, Head of the SAP Labs Network and also its fast growth market strategy.

Contributing to this story were: Joanne Chen and Liny Yang, SAP Labs China.