Does DA require a separate license?

Replication Server Data Assurance Option is licensed through SySAM license manager and is available on multiple platforms. For more information about obtaining a license refer to the Obtaining a license section of the DA Installation guide.

Why might I want to install a Data Assurance (DA) agent?

Some of the advantages of installing separate DA agents are:

Which version of DA am I running?

You can check the version of the DA server (or DA agent) in the following two ways:

a)  On the command prompt, from the DA installation directory, execute the version command:

The returned result is:

b)  Run one of the DA jar files with:

For example, form the top-level SAP directory of the DA installation use the Sybase shared JRE and run:

The returned result is:

Does DA lock the source and target tables while it compares them?

DA doesn’t lock the entire table. DA doesn’t issue any explicit lock commands to the source and target data servers. What it does is execute the table SELECT statements with the default isolation-level of READ COMMITTED. The implementation of the SELECT statement varies across different data servers, but it typically involves acquiring and releasing the read-locks on a row-by-row or page-by-page basis.

Can I filter the table rows that are compared?

Yes, you can use a WHERE clause to filter the table rows that you want to compare.

Add a WHERE clause to the compareset definition, for the source and/or the target:

The WHERE clauses are appended to the SELECT statements that DA issues against the source and target data servers.

Does DA only compare tables that have a PRIMARY KEY?

No, but for DA to compare two tables effectively, each table must have a column, or combination of columns, that can uniquely identify each row in the table. In DA, this is called the row key. Table columns that often make the best row keys are PRIMARY KEY columns, IDENTITY columns, and columns with a UNIQUE INDEX. However, any column, or combination of columns, that uniquely identifies each row in the table will suffice.

The create compareset … map all command automatically detects and assigns PRIMARY KEY and IDENTITY columns, and columns with a UNIQUE INDEX as row keys. If no such columns exist, all non-LOB columns are set as row keys.

Warning: If the columns assigned as the row key are neither a PRIMARY KEY nor an IDENTITY and do not have a UNIQUE INDEX, ordering by these columns can put a tremendous strain on the data server. Consider using DA external sort in these circumstances.

Warning: If the columns assigned as the row key are not unique, DA aborts the comparison (either immediately or after the first compare all phase) with a duplicate key error.

What is the throughput for row comparison?

The throughput for row comparison can vary greatly. For example, the DA server row comparison is in-memory, quick, and (often) relatively simple; it is unlikely to be a bottleneck.

The time it takes for the JDBC driver to obtain the rows from the data servers usually governs the comparison throughput. The comparison is as fast as the slowest of the source and target data servers.

Note: Throughput for the row comparison does not include the additional time it takes for DA to perform an external sort, if configured.

Can DA be installed on its own server to minimize impact on SRS and the primary and replicate databases?

Yes. There is no requirement to install DA server or DA agent on the same server as the SAP Replication Server, the primary database, or the replicate database.

In a live replication environment, there typically are false positive results. However, these false positives are driven by environmental factors, such as the frequency of table updates or whether you run DA during quiet times.

DA has a two-part strategy for eliminating false positive results:

The primary rows are not re-selected (they are cached during the initial compare) so as to ignore further updates to the primary table. 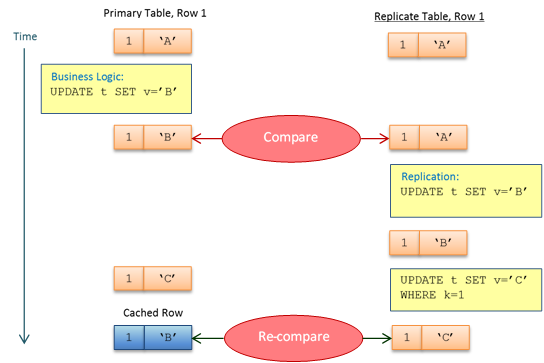 2. If the re-compare differences method fails, DA uses the single and final verify differences compare phase. During this phase, DA re-selects and re-compares all rows that are still different from both the primary and replicate tables.

Note: DA is prone to false positives caused by replication latency in the same way as the initial compare. Any differences that exist after the verify differences phase have to be investigated manually.

What is direct reconciliation?

For more information about Non-direct and Direct reconciliation refer to the Comparison and Reconciliation Strategies section of the DA User’s Guide.

What are the LITERAL and ROW_HASH compare options for?

The following diagram shows how different options affect the comparison of a four-column table with 1 GB of data. 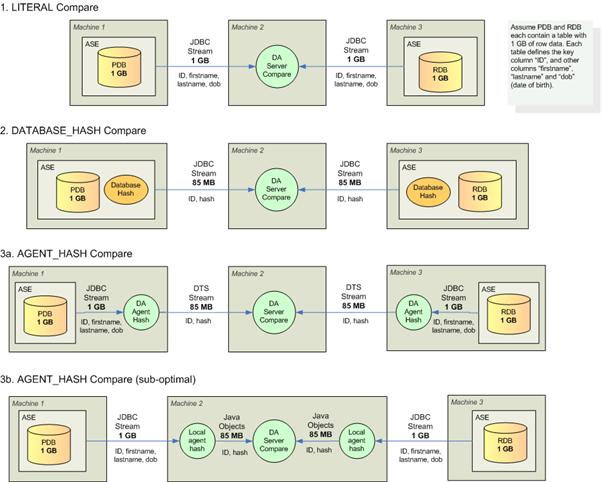 There are no definite rules about using any of these options. Choose your desired option based on the rate at which a data server can deliver rows, and the speed of the network. As a general rule:

Can DA run more than one job at a time?

Typical usage: Use this option to avoid starving DA of resources (CPU/memory).

Typical usage: When a job has comparisons that all use the same source and target databases, use this option to avoid hitting a database too hard.

Typical usage: Use this option to ensure that the most important tables are compared first.

How does DA manage its compare threads?

When the number of comparisons submitted to run exceed the limit specified by the comparer_max_concurrent_threads configuration parameter, DA allocates the compare threads as follows:

For more information about thread management, refer to the Compare Thread Management topic in the DA User’s guide

How do I install JDBC drivers?

For SAP Adaptive Server Enterprise, SAP IQ, and SAP HANA DA server, you do not need to install JDBC drivers as DA server and DA agent ship with the preconfigured drivers.

To install JDBC drivers for MSSQL, UDB, and Oracle, follow the steps mentioned in the DA Quick Start Guide and the Configuring JDBC Drivers section of the DA User’s guide.

According to the 15.7 New Features Guide:

I think this should information should go first in the FAQ

Thanks Benjamin for your valuable feedback!!

Yes, I agree the information about a separate license for your DA is relevant and must be there in the FAQ. I am in the process of adding this information.

I have updated the topic to add the info that you asked for.