Are smart cities relevant for state, local, and regional government?

Smart cities are a global trend, with cities around the world such as Copenhagen, Barcelona, Manchester, Dubai, Boston, Chicago, Palo Alto, Buenos Aires, Puebla, Montreal, Mumbai, and Singapore embracing the concept, to name just a few.  Faced with population growth, constrained resources, increased pressure on infrastructure, the need to promote economic growth and employment while providing for public safety and health, cities must innovate to address these challenges. City leaders are embracing new technology and business models to meet citizen and stakeholder needs, transforming into “smart cities.”

But what is a smart city?

While there is no single standard definition for a “smart city”, there is general consensus that a smart city invests in human and social capital, emerging technology, and traditional infrastructure to promote sustainable economic growth with wise use of natural resources and sound governance. Smart city programs touch all aspects of government transportation, asset management, public safety, health and social care, governance and so much more — and supported by SAP’s Future Cities program.

Is the Smart City concept relevant for state, regional and local government?

This question has two parts:

1) Do state, regional, and local governments have similar responsibilities to cities? And,

2) If so, what can be learned from smart city programs (and vice-versa)?

States, provinces, counties, regional and local government face similar challenges and have some of the same responsibilities as cities. For example, state, regional and local governments are often responsible for roads, public safety, health and social services, elections, licenses, permits, and other activities.They create policies and assess outcomes, using data-driven insights to formulate new policies to improve outcomes for citizens. Also important to note, state or provincial government responsibilities may be in a much more geographically diverse area than for a city.

What can states learn from smart city programs – and vice-versa?

Let’s start with Brisbane City Council, the largest local government in Australia. Brisbane Vision 2031 is the Council’s long-term plan for the city, constantly updated based on the city’s emerging needs and new technological advancements. That vision includes changing the way the Council works to adapt to new technology, instead of the other way around. The Brisbane City Council uses a single platform for park and road maintenance, with mobile and geo-spatial capabilities to deliver a positive return on investment for citizens. The City now maintains more parks and roads in less time, while delivering savings to citizens. Relevant for a state, province, regional or local government? Yes!

Now, let’s see if this principle works in reverse. The State of Indiana is at the leading of data-driven government. The State’s Management and Performance Hub (Management Performance Hub | IN.gov) brings together data from various state agencies to gain actionable insights. Tough social problems such as infant mortality, the opioid epidemic, and recidivism were the first use cases. The State had support from Governor Mike Pence to establish the Management and Performance Hub, find resources to set it up, and identify compelling use cases to investigate. City mayors as well as other state, regional and local government leaders could do the same.

These are just two examples. In future, expect to hear more about smart state, regional and local government, such as this recent example in the State of Illinois (http://statescoop.com/illinois-launches-drive-to-become-first-smart-state-using-iot ).

What’s happening in your part of the world?

Excellent synopsis Marlyn. In the UK we are seeing increasing momentum toward digital government. Ongoing budget cuts mean that government has to find more efficient ways of working whilst still delivering excellent service. Re-evaluating existing processes and digitizing them where appropriate and advantageous is a pressing need. SAP's ongoing innovations can only help in this regard.

Marlyn, this year we'll have election for the municipalities in Brazil and many large cities the candidates included in their programs initiatives to address Smart Cities. Despite the long time we heard projects in this area few are the examples we can mention, such as Buenos Aires and Medellin. I believe that this movement has no turning back, most as result of the pression of the citizens that look new way to interact with the public agencies. I liked your point of view !!!

Hi Marlyn!  Just happened to see this post which is a great summary. I think, building on comments above, we are finding that even as, in terms of revenues or sales, smart cities may not be the biggest market (yet) and local governments can be complicated to work with in terms of investment, the point is that this is a top of mind topic for many city leaders and broader ecosystem partners.  So, beyond the specific smart city deployments there will also be broader opportunities. I like the updated Value Map - are there specific products at the next level underneath areas like "Data-driven Cities?"  Cities will get a data-driven city value but they don't purchase that way so wondering about how to buy.

Thanks for the compliment! 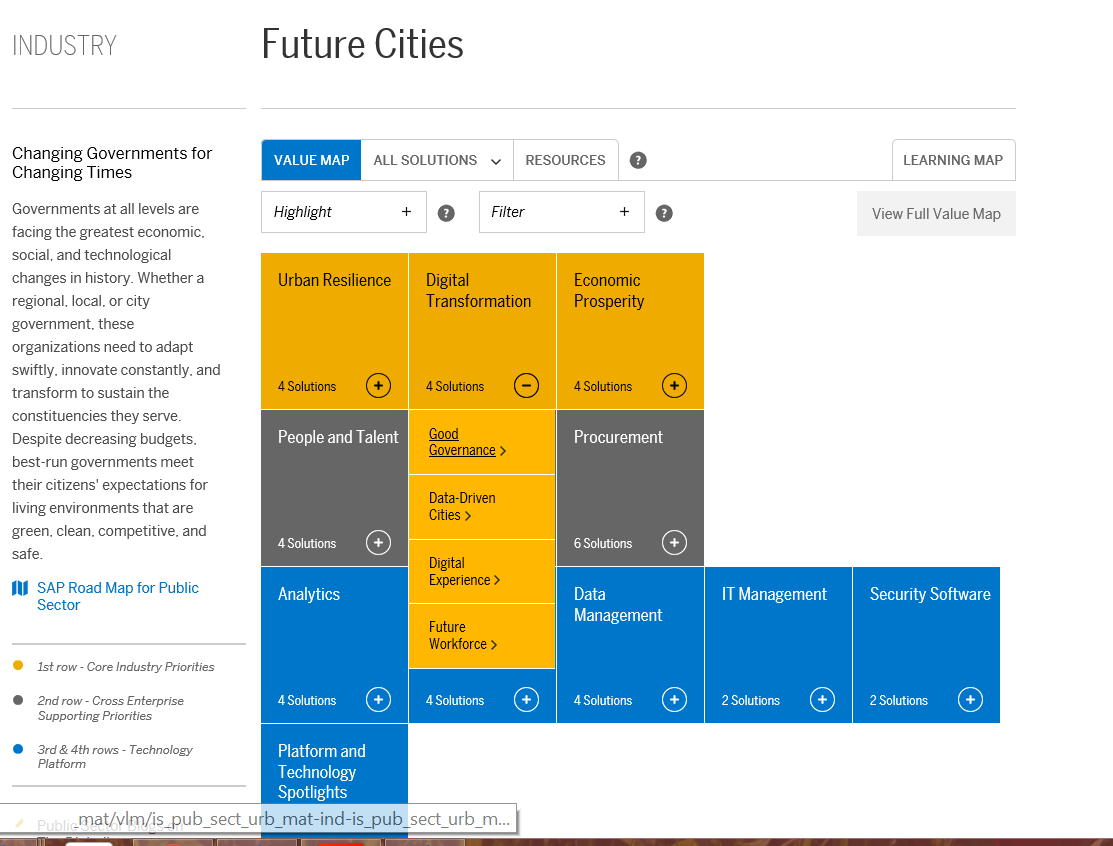 This next page lists relevant solutions as well as proof points: 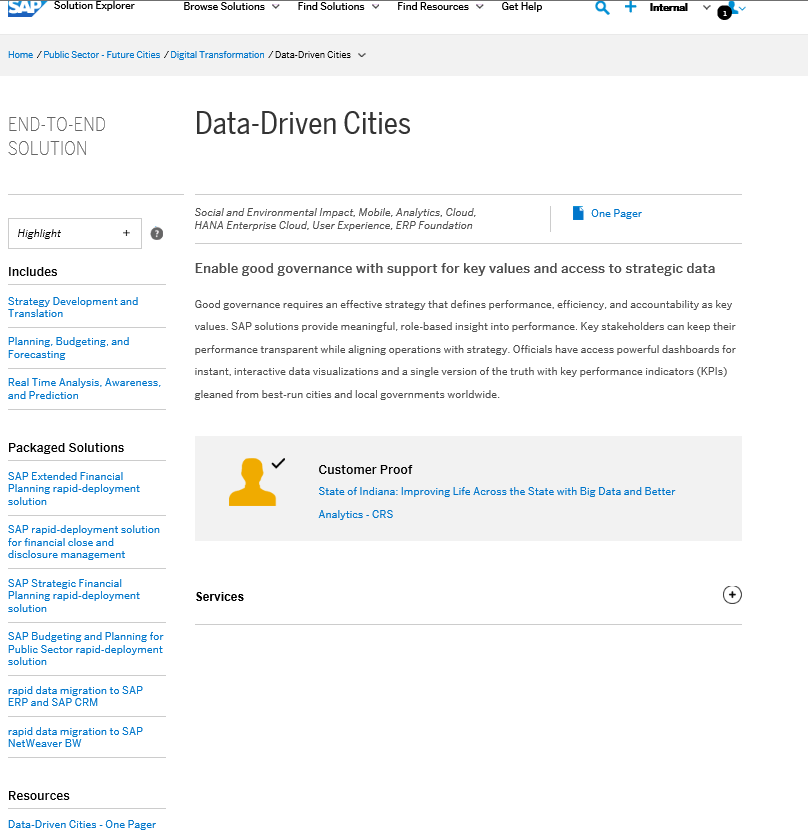 There are hyperlinks on this page to packaged solutions and a 1-page summary on Data-Driven Cities. A log-on or creation of user-name and password may be required to access some information.

I also agree with your comment that there may be broader opportunities - not only in local and regional government, but also in related industries for cities. Many activities within a "smart city" are not owned or run by the city itself. Examples include privately owned sports arenas, power companies, as well as real estate developers, to name just a few.

If you have any further questions, please feel free to post them here.