Over the last 30 years, Pride parades have played a major role in my life. This year will be an even more important date.

My first Pride parade. Just few days before my 18th birthday, very early in the morning, I jumped on a train to Paris. 4 hours later, I was there, on my own, walking in the middle of the crowd. After one hour, I realized that I was part of something much bigger and more important than my own identity, or than my fear, at the time, to be caught on camera, and the terrifying possibility that my family would see me in the news on TV that evening. That year, what everyone had in mind was AIDS. The epidemic was spreading rapidly, over 11000 people had died the year before and the New-York Times was reporting on the myths of AIDS transmission. A far-right politician had just announced that his party would support a mandatory registry of people infected with HIV. The overall tone of the parade was serious and somber. But, despite the threats and concerns, the parade ended in a huge party, dancing and singing the fear away. I met many incredible people that night, and one of them, almost 30 years later, is still one of my best friends.

Just few days after Spain officially legalized same-*** marriage, I took a train, again. This time it was from Barcelona to Madrid. The capital city of Spain became a gigantic party, people of all age, gender, race and sexual orientation marching in the street, dancing and celebrating all day on a particularly hot day of July. I was thinking of that great guy I had just met in Barcelona, without imagining, though, that 10 years later he would become my husband.

My third best memory of a Pride Parade. The pride of being accepted for who I am by my friends and my colleagues. The pride of marching wearing my SAP T-shirt. Proud of working for a company that values and promotes diversity. That year was also a cause for celebration. It was already going to be a big party, as always, and the historic Supreme Court decision in favor of marriage equality definitely put everybody in a celebratory state of mind. Although it took few hours for our group to start moving, the whole day was simply an amazing experience for my friends, colleagues and myself. 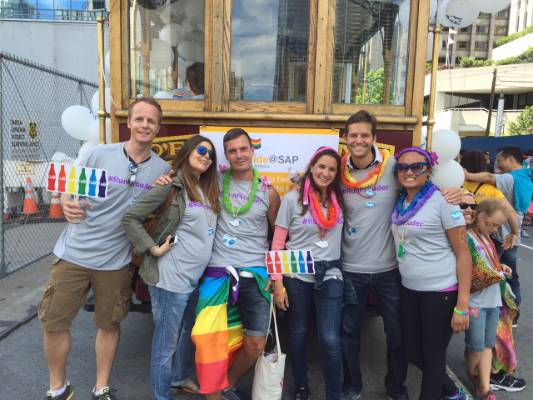 The three experiences I’ve described above are mostly about me. A shy teenager uncomfortable with his own identity, discovering his sexuality during a very dark period. An expat living in a country that suddenly became more tolerant and open that his own country. An employee proud of his employer and grateful, receiving the love and respect of his colleagues and friends.

This year the Pride Parade will be about THEM. 49 people that I never had the chance to met, but I feel I know anyway, 49 people “who loved and who were loved”. I will wear, proudly, my #RunProuder T-shirt and march with my SAP colleagues. I will also party, as those 49 people would have, enjoying the day with my colleagues, friends and loved ones, just to show the world that #LoveWins.

One of the best stores I have read. Thank you Frederic! We had hoped to get our NSQ Autism at Work team down to the pride parade in Philly for the festivities. We ran out of time but hopefully next year!

Thank you Erika and Gabrielle! I appreciate the support. Gabrielle: Autism at Work is an amazing initiative and it'll be awesome if the team can participate next year.