SAP Transport Management System (STMS) – What is STMS & How to Configure

Domain Controller–: It is used to control the landscape. There will be only one domain controller in the landscape. Initially it is set to development and later can be moved to on higher available system such as PRD/QAS/Pre-production but to keep the things simple most of the cases we keep DEV as Domain Controller

Member Systems–: The other systems are included in the domain and referred as member systems.

The 2 options get popped up when STMS transaction is executed either to configure domain or include the system in the domain.

Domain controller is created by using DOMAIN_SID and other members are included by respective HOSTNAME’s and INSTANCE Number’s.

Steps to Include System in the Domain–:

TMSADM is a communication user created during TMS configuration

2. A message SAP System waited to be included in the transport Domain is displayed to the external system.

Approving the Inclusion of Systems: 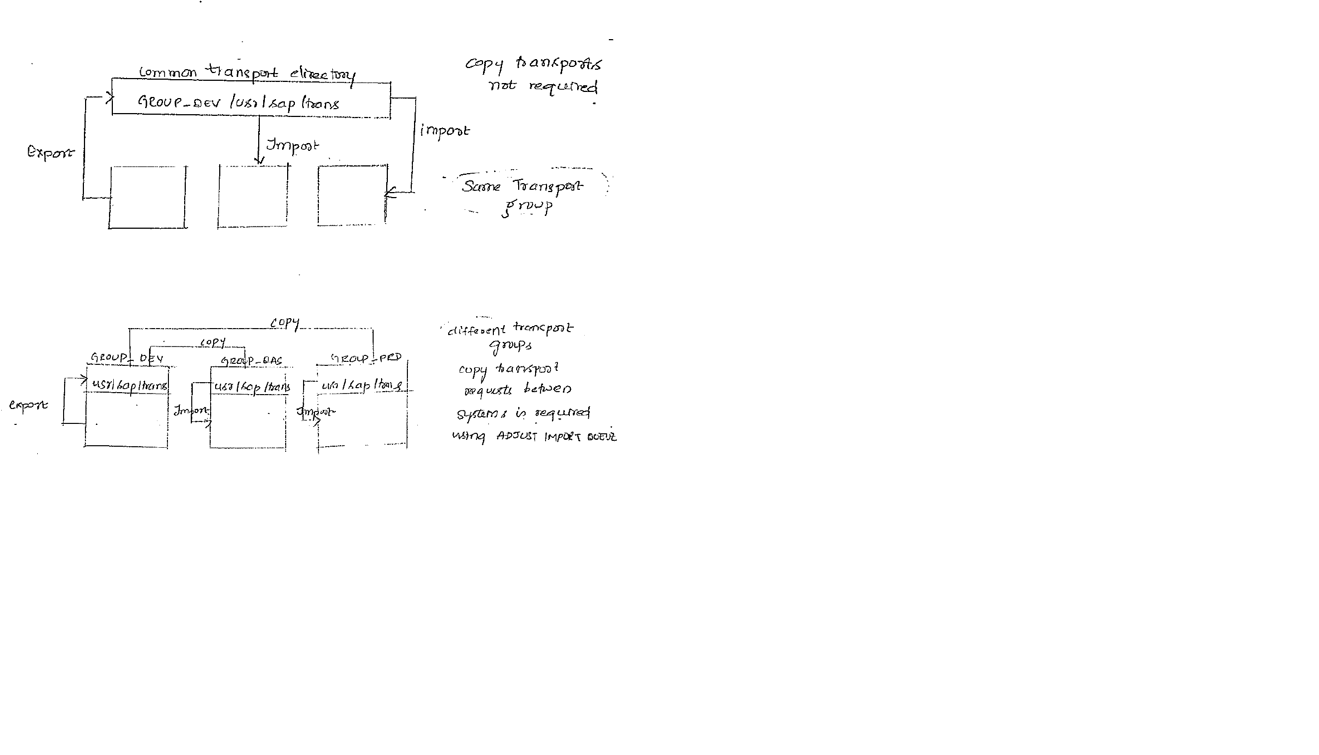 It is a naming convention group_SID to configure all the systems to a single transport group i.e, all the developments which are performed in the development system will be automatically available to other systems in the landscape.

The group of systems which shares the transport directory in common are said to be in a group but due to sensitivity of PRD it is moved into a separate group.

NOTE–: It specifies where the transport requests are grouped – transport group

This Icon will be enabled only if we are using different transport groups.

The SAP system is adopted by using customizing and development.

In the customer namespace “Y”, “Z” or “company name”

All the above repository objects can be developed in SE80

Change Request-: It is used to record the changes that are performed during customizing, cross-client customization and development.

NOTE–: It is not the responsibility of a basis consultants to release the change request, but considering the SOW.

The change requests are release in SE01/SE09/SE10.

So SAP introduced change request mechanism to record the changes during customizing and development and upon release, transport to other systems independent of OS and DB.

It is used to copy the change requests bw clients in the same systems for unit testing before they are released. It is used for client specific objects.

TP–: It is a transport protocol which is used to export the change requests and import transport requests.

Change Request Release–:  Release of change requests are performed by developers and functional consultants and once change request is released it is referred as TR.

The transport requests are stored in trans directory

Transport request number, name of the owner and time stamp

NOTE-: Virtual system name and real system name should be same. If they differ then all the change requests have to be added manually.

TMSADM is a communication user which is created during TMS configuration. It is used by TP to transport the objects bw the systems.

TMSUP and TMSADM RFC connections are created bw all the systems in the landscape to facilitate the transports.

TP_DOMAIN_SID.PFL –: is used to provide profile parameters for TP. It specifies the profile, exe locations along with TP version.

NOTE–:  Cofiles and corresponding Datafiles are must to transport an object.

It is used to host the patches. The patches are downloaded to this directory i.e, EPS/in

It is used to apply Support Packages, languages add-ons etc.

LOG–: It is used to display the transport logs. In SAP naming conventions transports means it can be an export/import. These logs are stored in this directory.

SLOG–: It specifies the Job Steps.

ULOG–: It specifies the TP commands

Secstore–: is a transaction which is used to check the RFC connections which are pointed to obsolete system. The connections with “RED” mark can be deleted.

WHEN A TRANSPORT REQUEST IS RELEASED

Each program/repository objects need to be assigned with a valid development class/package, if they are assigned to $TMP class or saved as Local Objects, they are not transportable.

Transport Layers are defined in STMS

Transport routes are assigned to transport systems which forms a landscape

DEV is the system where integration/development and customizing is initiated which is referred as Consolidation System.

QAS is the system where consolidation of objects, testing, quality assurance, training etc is initiated, which is referred as Integration System

PRD is the system where business activities are performed [without any development, testing and quality] which is referred as Delivery System.

Specify the client number, specify the schedule to import [immediate, later, date and time, after event, during system startup etc]

While importing the request it checks for command {control file} along with data file, these are mandatory for import.

***Disable the fully loaded truck after the implementation by using parameter

The sequence of the transport requests is very important and mandatory.

If GUI is not accessible then use command

2. Check the “RDDIMPDP” jobs are scheduled in client 000 with user like DDIC
3. Ensure that STMS is configured and it is consistent

4. Check whether tp is able to read the transport profile, check the transport directory and its permissions writability to log,sapnames, tmp dir

5. Check the tmp directory which should not contains any hanging recods.

7. In R/3, check if the transport RDDIMPDP is scheduled correctly and event_triggered. To check on the success of all related background processes [RDD* jobs] via tcode SM37

8. Problems may result from wrong version of tp or r3trans, tp not running [unix-: ps –ef|grep tp] use task manager on windows

10. When analyzing a problem, compare the logs and buffer entries into tables TRBAT and TRJOB.

11. If a communication problem between tp and R3 is indicated, try calling SAPEVT on operating system level and see if it trigger RDDIMPDP.

12. If multiple tp are running then delete/kill all of them and restore the transport [which will start from the point where it has been stopped]

13. Check whether any objects in locked/repaired status in SE03 and release/unlock them.

14. Ensure that at least 2 background jobs are in place.

15. Local change requests or the objects that are assigned to a $tmp class are never transported.

Import the requests in STMS-:

By executing these commands you can view the files writing into tmp directory. Size gets increased.

Ps –ef|grep tp –> to check tp is connected or not

While applying support packages some of the objects are modified/uploaded.

Due to this modification the system may be inconsistent and these objects are displayed in SPDD and SPAU.

Add-on Conflicts–: When add-on’s are applied they may conflict with existing basis packages.

Great effort Samar and nicely explained too..!! Hoping to see more of your Blogs..!!

Thank you so much for putting up things in a single place.

I am sure this blog will help many aspirants.

Nice explanation. STMS is an critical TCode in SAP

Thank you for your efforts in collating all the information on SAP Transports and placing it in just one blog.

Appreciate your efforts, I am sure this blog is very helpful for our upcoming SAP BASIS Admins to get and overview of STMS.

Thank you for the Information!

Basically I am from ABAP background and we don't have any Basis Consultant. In my case after releasing TR, the cofiles and data files are not generated. That is because I haven't mentioned any Target System.

Where Can I configure the target system? If I am giving my Target system in se09 Properties tab, I am getting an error "Target System is unknown in the current transport configuration"

Could you please help me on this??

In our case you are creating Local Transport Request , where Data file and Co-flie are not produced.

Check your transport routes ,if there now other systems in your landscape. You need Create a new  system or virtual system in Transport Landscape (Either quality or Production  and Create a Group that share your co-file and Datafile with all systems in data group . then You able to see SID list in Target system in properties Tab. After this you can able to see co-file and Data file after Tr release.

Thank you for the reply!

Now I have created virtual system and able to see target system in the TR.

After release of TR, cofiles and data files are generated. I downloaded the files and imported in target system. I was able to import few TR's which are having single objects ex: table. in target system

But when I try to import TR's with multiple objects(ex: Tables along with Fm and Function group) it is giving me errors.

Tried with multiple TR's and unable to resolve it. Could you please help me if I am missing any other configurations?

Thank you very much for your help.

Can we use IMPORT_ALL in prod systems?

Does using IMPORT_ALL take care of the dependent transports and the sequence of the transports in the way it was imported in lower environments ?