This is the first part in a series of blogs meant to give some more background information on the most important aspects of SAP Fiori 2.0, the user experience for S/4HANA. In this post, I will explain the different ways you can organize and manage applications in the SAP Fiori launchpad.

The launchpad is the environment in which all SAP Fiori applications run. Much of the glue and integration functionality (such as navigation, search, and notifications) that create a coherent experience across the apps is located in the launchpad.

One of the most important functions of the launchpad is to provide access to all the applications that a user needs. 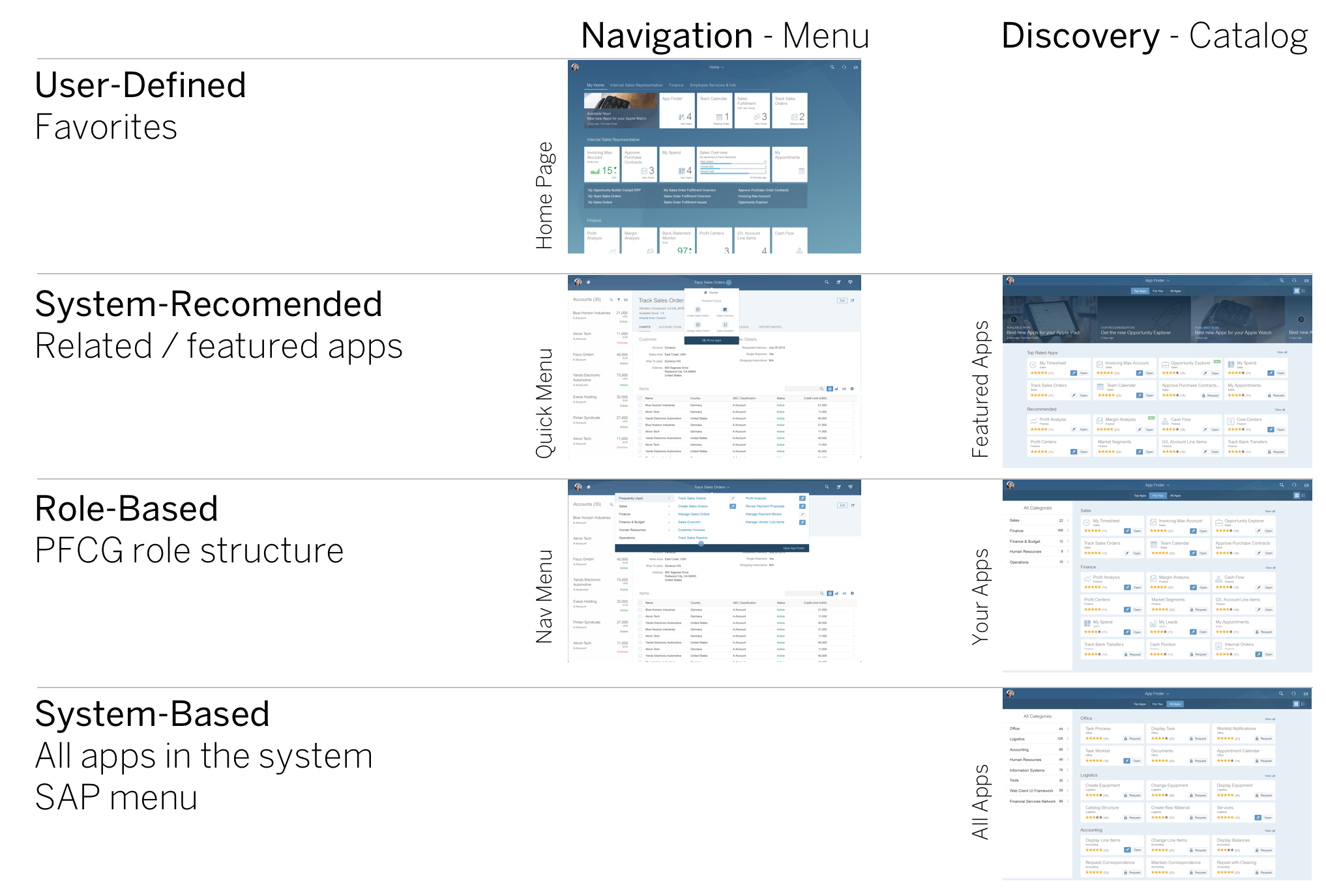 There are two fundamental use cases for a user to access applications:

Of course, in an enterprise environment there are generally clear rules about which users/roles are allowed to use which applications. An administrator will typically assign the user specific roles with the assumption that the user’s tasks have already been well defined. This was the principle on which current navigation concepts were based. Navigation consisted of a curated catalog or repository of apps from which the user could select.

However, as we learn more about our users and about how they are using the system, we want to be able to provide more tailored recommendations. There is also a certain level of fuzziness in the practice of role-assignment that we want to avoid. Often, administrators tend to define roles either too widely or too narrowly, risking either too liberal of an authorization, or forcing the user to request access to individual apps manually. What often ends up being the case is that users need to overcome certain hurdles to access the required functionality, and ultimately decreases effectiveness.

With SAP Fiori 2.0, we have developed a more granular concept to support easy navigation as well as discovery. 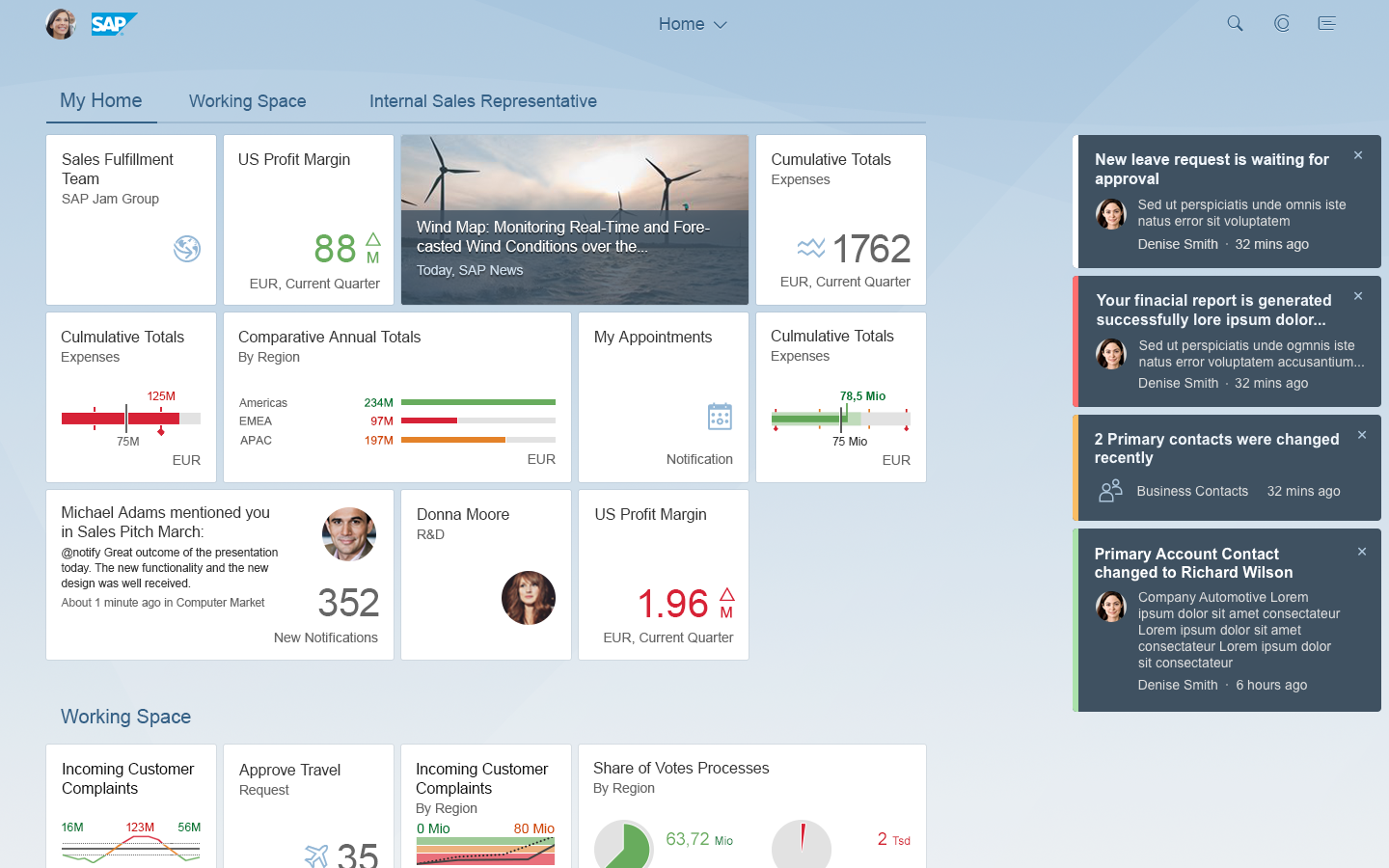 The primary place where a user will look for applications is the home page. This is the heart of the launchpad and the starting place for the user. The home page is similar to the corresponding concepts on mobile platforms or common operating systems. It’s a place where the user can create shortcuts to the apps he or she uses most frequently.

This also means that the home page should be considered a place where the user – and not the system administrator or boss – is king. Much of the functionality that allows administrators to make apps or groups of apps permanently visible and fixed to a certain position on the home page, though useful, ultimately reduces the users’ freedom and should be handled with extreme care. After all, who wants to own a home where other people decide on what furniture to buy and where to place it?

By combining launching and dashboard functionalities, the home page offers more flexibility than a regular desktop or device home without increasing the level of complexity for the user: 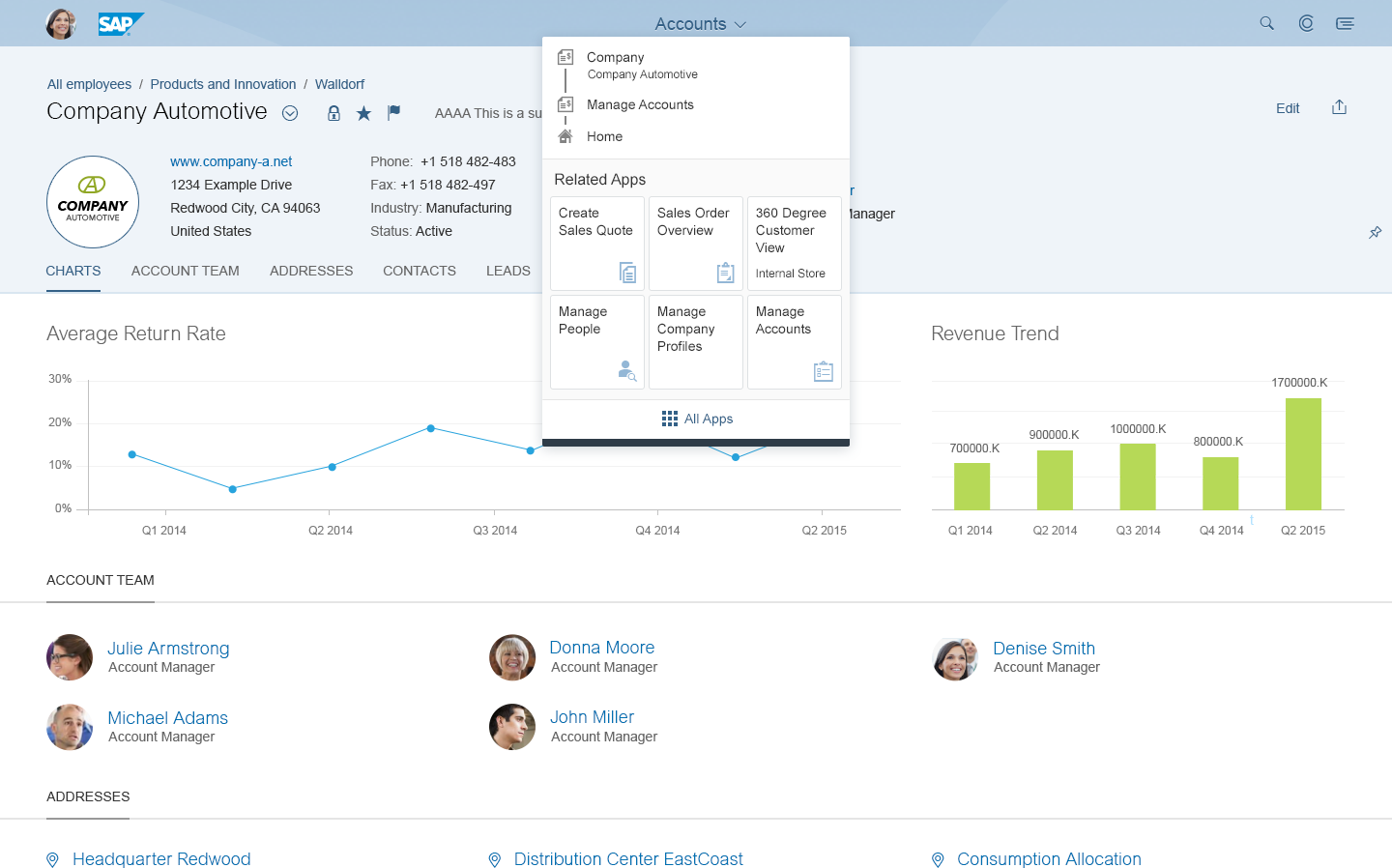 Initially, the navigation concept in SAP Fiori was inspired by mobile operating systems in the sense that apps were launched from a central home page. To access another application from within an open application, the user would need to return to the home page. This navigation concept, the so-called hub-and-spoke model, is simple and intuitive, but it doesn’t scale to a large suite of business applications.

Traditionally, this issue would have been solved with navigation menus that either reside on top or on the left of the screen, revealing the fixed navigation structure of the environment. Unfortunately, such an approach not only takes up valuable screen real estate, which is not an option for mobile use, but it also creates unnecessary complexity. Assuming that the home page holds access to all the apps that the user needs to accomplish his or her tasks, and assuming also that these apps sequentially guide the user through each task, having a comprehensive navigation menu would likely end up being more distracting than helpful.

We therefore decided to take a different approach to navigation for SAP Fiori 2.0. In addition to keeping the original hub-and-spoke navigation, we also introduced an additional navigation menu. While not yet fully implemented (2 and 3 are still lab preview), the navigation menu potentially offers three different navigation approaches: While not technically part of the navigation menu, the launchpad will also offer an additional way for the user to navigate through SAP Fiori through a frequently used apps option in the so-called Me Area (more on this area in the next blog). This is an especially useful feature for users who only use a small number of apps on a frequent basis. In addition to this, the SAP Fiori launchpad will also provide separate access to both an app history and a used objects history.

If a user needs to find a certain functionality or application, but is not sure whether this is available or how it’s called exactly, the user will benefit from an intuitive way to browse and explore the available apps. For this purpose, we are planning to introduce the App Finder, an “app store”-like interface that will list all the apps that a user might potentially use. Apps in the App Finder will be sorted in the following way: As this is under development, this should be considered a lab preview with no commitment to the final product scope.

Let’s take a look at the case of the frontend server catalog apps. As the image illustrates, the idea of the App Finder is to feature applications either based on administrated rules or on matching algorithms, as is common in store interfaces.

Other common functionalities such as application descriptions, screenshots, and community content should accompany these apps so that the user can get a better idea of whether an app might be useful. From the App Finder, the user will be able to directly open an app or add it to the home page as part of his or her favorites. If the user doesn’t have access rights for a specific app, he or she should be able to directly request the rights through a GRC process.

While Top Apps features specific apps along certain recommendation criteria, the For You and All Apps perspectives offer a hierarchically structured view of different system-specific catalogs. Here the user can search or browse the entire catalog for suitable apps.

Even though the App Finder is not really a store in the sense that users can purchase and download apps, it is nevertheless a well-established paradigm that every user knows how to handle. Users will, however, be able to launch the apps, add them to the home page, and rate them.

With SAP Fiori 2.0, we have significantly enhanced the way apps are managed, making it even more suitable for a large suite of enterprise applications. With the distinction between navigation and discovery, we can now offer much more targeted support for the individual use cases. We are introducing new functionality to manage the user’s favorite apps, to navigate between apps, and to discover new apps without sacrificing the design principles of adaptiveness and simplicity. Furthermore, we are laying the foundation for contextual navigations and recommendations of applications, an area that will heavily evolve within the upcoming years.

At SAPPHIRE 2016, we showed a preview of SAP Fiori 2.0 in our development systems and the feedback was extremely positive. Parts of the abovementioned functionality will be included in the next releases of S/4HANA.

Thanks for the preview kai. Looking forward for next blogs..

Hello Kai, Please could you tell me if Fiori 2.0 is already released for customers, and if it's posible to install it in a system with no HANA DB available, we have SAP Netweaver 7.4, ECC 6.0 EHP 7, SAPUI5 1.28.

Thank you very much in advanced.

please understand that I am focusing on the design aspects of Fiori 2.0. I am not an expert in the technical aspects of this and I am afraid that any answer I would give you on that question might not be 100% accurate. I suggest you to consult the technical contributions on SCN that focus on such topics.

Sorry, thanks Kai anyway. I will find out this as you say.

Glad that I could make you interested in Fiori 2.0! 🙂

how will Fiori 2.0 Launchpad be available? Will it be available for the SAP Portal using Fiori Framework Page with Fiori Launchpad (e.g. NW7.50 SP7)?

I am sorry, but I can’t give you information about product availability and technical preconditions. I am no technical expert and I don’t want to give you wrong information.

Did you already have a look at the product roadmap for SAP Fiori? This should give you some more information.

We have separate server for SAP Fiori (Gateway) as a hub installation. All Fiori applications are deployed on this server. However, we are not using the Fiori launchpad from this Fiori server. But, we have configured Fiori Launchpad from SAP Portal as we have mix of applications to display from the launchpad.

Logically, it should work right otherwise there will be a major dependency between Portal and Fiori server.

With above landscape in mind, I have seen below 2 issues. (Opened OSS Message as well and waiting for the response.)