If you follow the right supply chain circles, and lately also some of the big conferences, you might have already noticed there is some buzz around Demand-Driven Material Requirements Planning (DDMRP for short). In the SAP world, however, there is still a deafening silence about this subject. This series of blogs intends to fill this gap.

I haven’t yet decided how many parts this series will have (it also depends on the amount of interest it gets) but the idea is, after this short historic introduction, to detail why changes to MRP are needed, and then proceed to explain DDMRP with one post about each of its components. Wherever possible I’ll try to discuss what can and cannot currently be done directly with SAP, and maybe even what would have to be developed in SAP to fulfill the minimum DDMRP software compliance criteria.

DDMRP stated goal is, then, to solve the shortcomings of traditional MRP in the new normal. The main authors behinds DDMRP, Carol Ptak and Chad Smith (no, not the Chilli Peppers drummer) have apparently been working for almost 20 years on what was to become DDMRP, but only in the last few years it has become more popular. It was first known by the unfortunate name of Actively Synchronized Replenishment (ASR), and I dare say that only when it was re-baptized to DDMRP (and branded as a successor to MRP) did it really take off. No criticism there, of course, just highlighting the importance a good name can have.

Both Ptak and Smith have strong connections to Eli Goldratt’s Theory of Constraints (TOC), and they don’t try to hide it: that would be hard anyway, if you think that Carol Ptak, a former APICS society president, was co-author with Goldratt of the business novel Necessary But Not Sufficient, and Chad Smith worked at the Goldratt Institute and has built a career around the different applications of TOC. The basic principles of ASR, not by accident, were described in Chapter 12 of the TOC Handbook (2010). Those versed in TOC will easily recognize some things they borrowed, like the green / yellow / red color coding used for buffers. However, I think they have made a great effort to appeal not only to the TOC tribe, but also to both MRP and Lean practitioners.

So, in a sentence, what is DDMRP? It is a method used both for planning and execution control that by defining (1) where to stock and (2) how much to stock – in a (3) dynamic way – will (4) generate supply orders according to average daily usage plus qualified sales spikes and finally (5) guide and alert execution in a visual way. The numbers in parenthesis are there for a reason, as each part of the definition briefly describes the five DDMRP components:

I understand for now this might not say much, but hopefully everything will become clearer with the following posts. 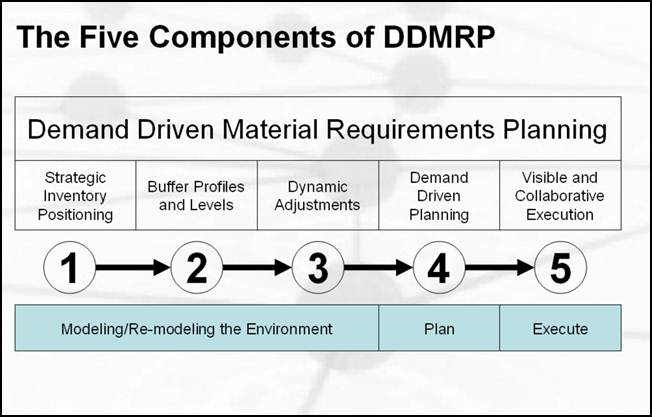 There is a growing list of DDMRP compliant software solutions (some exclusively doing DDMRP and others in addition to other planning methods), though the original Replenishment+ from Demand Driven Technologies seems to have the edge. There have been rumors that SAP Labs is working on some kind of a DDMRP solution, but I have no concrete details about that. Some (most?) of the existing DDMRP solutions can of course integrate with different ERP packages including SAP, but I still believe that having a working DDMRP solution in SAP itself would be a big advantage for SAP customers. This series is also a call for anyone interested in developing such a solution: I’d be very interested in hearing from you and discussing what we could do in that direction.

Currently the best reference for DDMRP is the 3rd version of Orlicky’s MRP bible (2011), revised by Ptak and Smith and with the last half a dozen chapters now dedicated to DDMRP. Not directly dedicated to DDMRP, but discussing related concepts and with an appendix that summarizes DDMRP quite well, is the also highly recommended Demand Driven Performance: Using Smart Metrics, by Debra and Chad Smith. The definitive reference, though, is to come out in a couple of weeks (beginning of July 2016) and should, among other things, define the official terms for some concepts whose previous name still bore a linkage to the original ASR.

Thank you for bringing up such an important topic.

Would like to get in touch with you to talk about SAP - DDMRP.

I have just published part II, hopefully the other ones will not take this long.

Thanks for sharing your thoughts, I just now notice your blog and planning to go through all of those. Keep sharing 🙂

Thanks for commenting, Ritesh.

First 5 parts are already up, still 3 or 4 more to go. Next one should be up soon.

If you do get a chance to go through them, your feedback would be highly appreciated.

Very interesting to see a series of DDMRP articles in the SAP website. This is another signal that the concept of Demand Driven Adaptive Enterprise will become the standard in the future. Thanks for publishing them, Rui Pedro.

Two comments, given that we produced the second software tool declared as "DD compliant" by the Demand Driven Institute, that we created the retail model under DDMRP published in the recent book by Carol and Chad and that we are the consulting company with the largest experience in real world applications after CMG (our strategic partner), the original creators of the methodology:

At the 2017 Sapphire Now Event,   SAP shared details of its DDMRP development program.   SAP is working with the Demand Driven Institute,   along with some of its DDI-certified partners,  to provide DDI-compliant software for the S/4HANA Enterprise Management solution, as well as our cloud-based Integrated Business Planning Solution (working with CAMELOT).    These solutions are planned for upcoming releases,  and announcements will be forthcoming.

Thanks for sharing your invaluable thoughts.

Great place to start for folks that are starting the Demand Driven Journey. Here at Demand Driven Technologies we are deeply committed to the principle that each and every client will achieve tangible and sustainable gains through the implementation of our solutions.