Explore time series on a map with Lumira and identify trends

Unlike my previous blog post, that gave a good overview of the importance of location analytics in the BI world as well as advanced mapping capabilities in Lumira, I wanted to provide a shorter and more concise summary.

The other day, I was working on a PoC for a prospect that manages schools in a big US city.

He wanted to explore a lot of KPIs related to the schools themselves, in conjunction to their districts : examples were number of students, origin of students, standard of living, …

In addition to the sample dataset that was given to me, I noticed that it also contained a temporal information dimension.

For example, for each school, I had the number of students and how this number evolved over several years.

Even if this was not in the scope of the initial proof of concept, I wanted to see what we could do with this additional information to see how the data evolved over time by school.

More and more use-cases seem to have temporal information in their datasets.

Examples like seeing sales information over multiple years in order to see trends over time, how revenue was impacted by month, quarter, year across multiple locations…are just some simple examples that illustrate the importance of time and location when analyzing critical operational data.

Your data is not static, explore them in motion

If you have temporal information in your dataset, it becomes a powerful tool to explore your data through time and visualize trends, punctual phenomena, and so on. This is what is we refer to as time series.

I’ve started my exploration of possibilities from there, taking the same dataset I’ve used previously (basically accounts with turnover per month).

Working on my accounts revenue, I found that some of my accounts have an increase in revenues during the same months year over year. I then thought “if you don’t see where your accounts are located, you will be unable to clearly identify the trend and make good decisions from it“.

First, I tried some “static” (= not animated) temporal charts.

This can sound weird but it can be a good start. 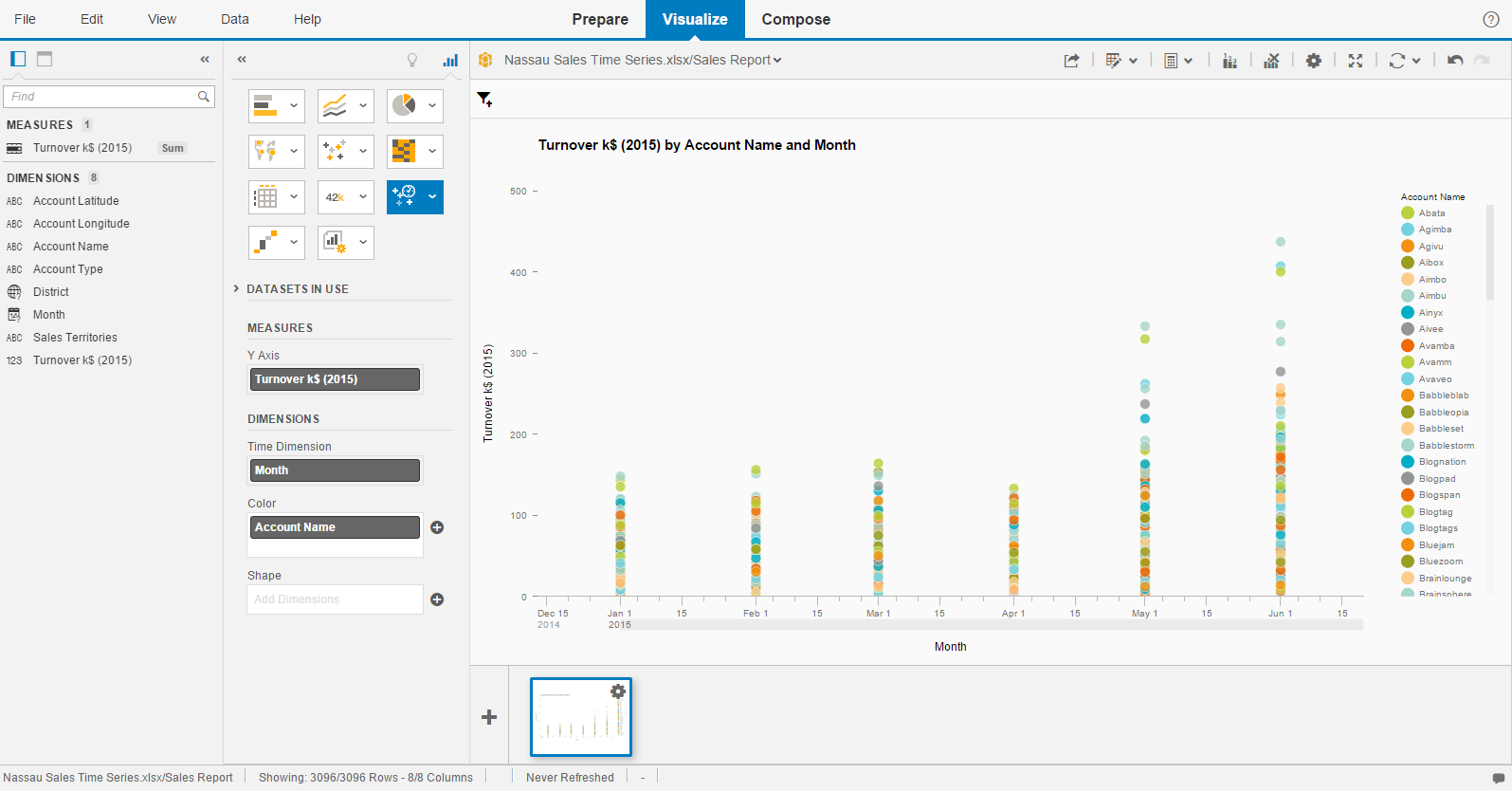 Here I have just above 500 accounts on my dataset, each containing a turnover value for the 6 first months of 2015.

As you can see, for May and June we have some accounts that stand out, so that’s a good entry, but that’s it.

Is the phenomenom just random, are the accounts concerned located on different places, or on the same place, and if yes, where (north, east, south, …)?

It also hard to identify which accounts are going up due to the lack of animation here.

So, there is still a lot of questions that you can’t answer with this chart.

Doing an animated series this time, after having aggregated each account to the district it belongs to, you can see the same trend as in the previous static chart. There, you see which district has a positive or negative growth, but still, you are unable to determine where it is happening. And that’s of course an important question that you want to be able to answer, to make sure you will make the right decisions.

For such use-case, temporal maps are clearly what’s needed, and especially temporal heatmaps.

Since we have a lot of accounts in a small area, it wouldn’t be that easy to see where the trend is located, some accounts will overlap, etc.

But heatmap does the job perfectly.

From the same data used with the charts above, we are able to understand the trend more effectively by changing the map style.

There, you can clearly see that while the accounts with highest turnovers where located on the East for the first months of the year, a clear trend appears – turnover is shifting to the West of the island starting from May. This is a huge insight that you would not be able to attain with the standard charts.

And of course, everything took place just by dragging and dropping dimensions in the right feeds.

Here is what we were able to see when looking at the schools across Philadelphia, PA:

Above, you see a temporal display of an exam success rate amongst schools, distributed over multiple years.

What is also pretty cool is that you can keep on playing with the heatmap radius, even while it’s playing the time series feature.

This gives the user the possibility to create the most accurate view of his data.

You can of course imagine the same visualizations with animated choropleth or animated geobubbles.

The heatmap extension used in this example is provided by the Galigeo For Lumira extension, that you can download right here.

Note that the time series feature is not available yet in the product, it will surely be integrated in the next product release.

If you want help getting started with the Galigeo For Lumira extension please visit these video tutorials on Youtube.

This will be it for today, I’ve tried to keep it quick! 🙂

Any feedback is gladly appreciated aswell.

Seems like a great addition to the Galigeo-features. The temporal dimenison is key for a lot of analysis.

One thing i still miss in the offering is more flexibility in choosing what kind of charts you show on the Geo-map. My business-user for example wants to show little bars per geo-location that depends on 2 measuere: one that changes the color of the bar (ideally with the option to manually define the ranges for each color grade), and another that changes the height of the bar.

The last version already introduces the possibility for the user to switch amongst several visualizations. For example, for POI, you can display them as geobubbles, as geobubbles+different color according to a category dimension, a range of colors, or as unique values.

What you described is the logical following of layer customization, and is planned in the roadmap.

Tho, what you described can already "be achieved" in a slighlty different way : you can already plot two dimensions to your POI : one will define the height of the bubbles (same as height in your example), and the other one the color (note that the color will be displayed as unique values, not range of colors).

Defining ranges manually is not possible tho at the moment.

Thanks Ina, do not hesitate to share it with the SAP teams around you 🙂 .