This blog is part of the blog series HANA based BW Transformation.

Now I will look a little bit behind the curtain and provide some technical background details about SAP HANA Transformations. The information provided here serves only for a better understanding of BW transformations which are pushed down.

A simple data flow is a data flow which connects two persistent BW objects with no InfoSource in between. The corresponding Data Transfer Process (DTP) processes only one BW transformation. 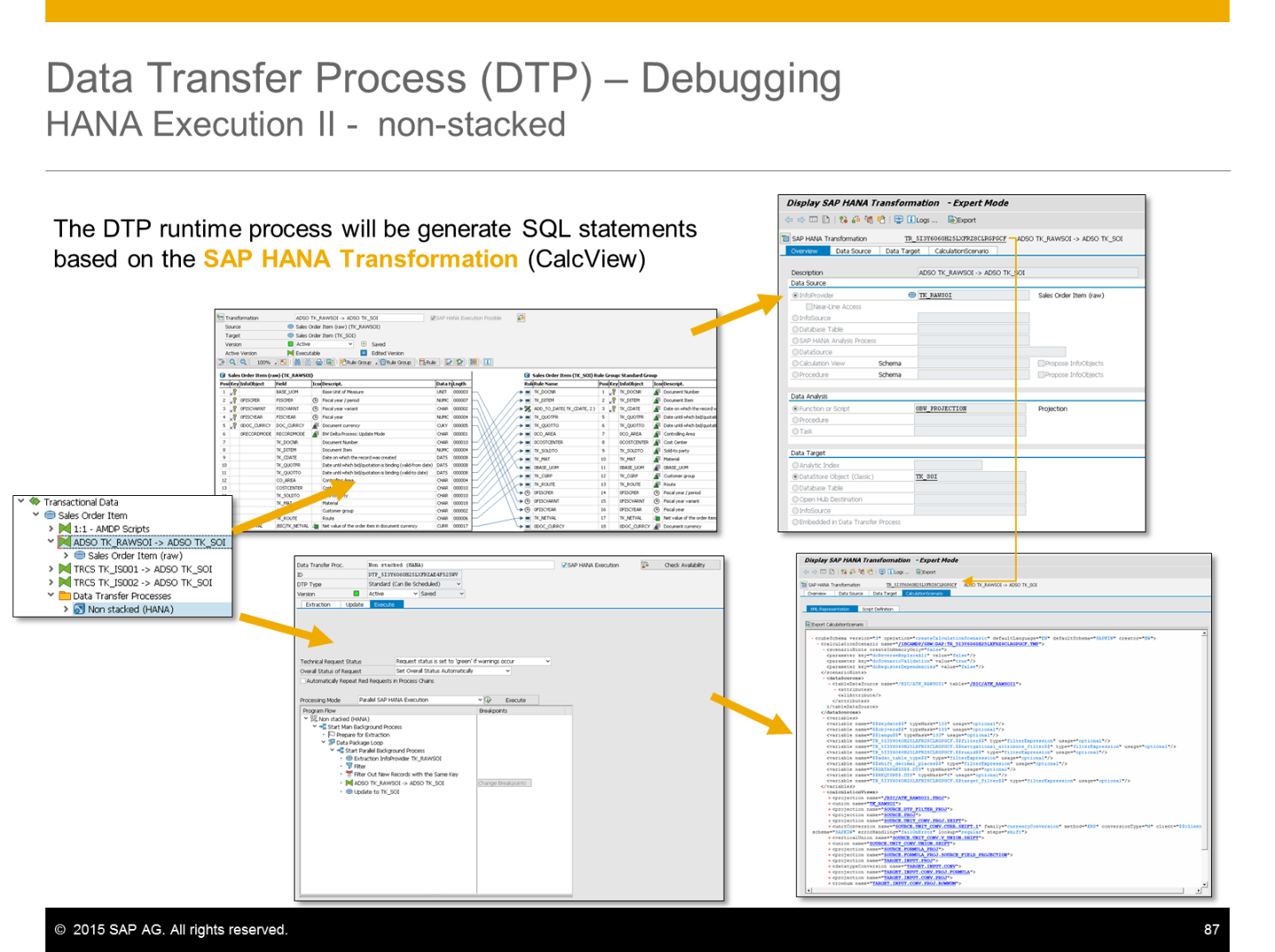 In case of a stacked data flow, the DTP cannot use the SAP HANA Transformation (SAP HANA Analysis Process) of the BW transformations. Strictly speaking, it is not possible to create a CalcScenario for a BW transformation with an InfoSource as source object. An InfoSource cannot be used as a data source in a CalculationScenario. 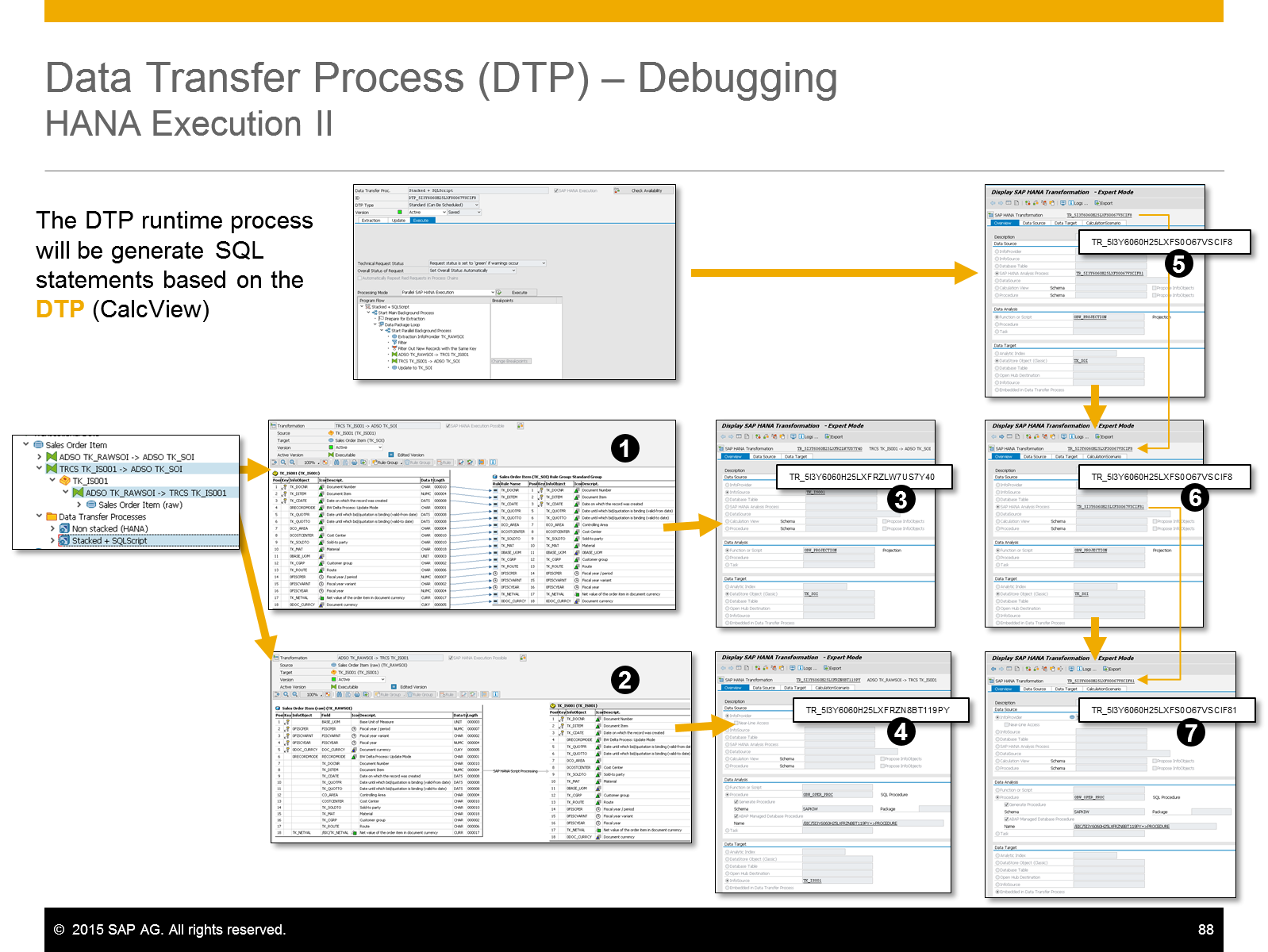 In the sample data flow above, the SAP HANA Transformation (5) for the DTP get its own technical ID TR_5I3Y6060H25LXFS0O67VSCIF8. The technical ID is based on the technical DTP ID and the prefix DTP_ would be replaced by the prefix TR_. 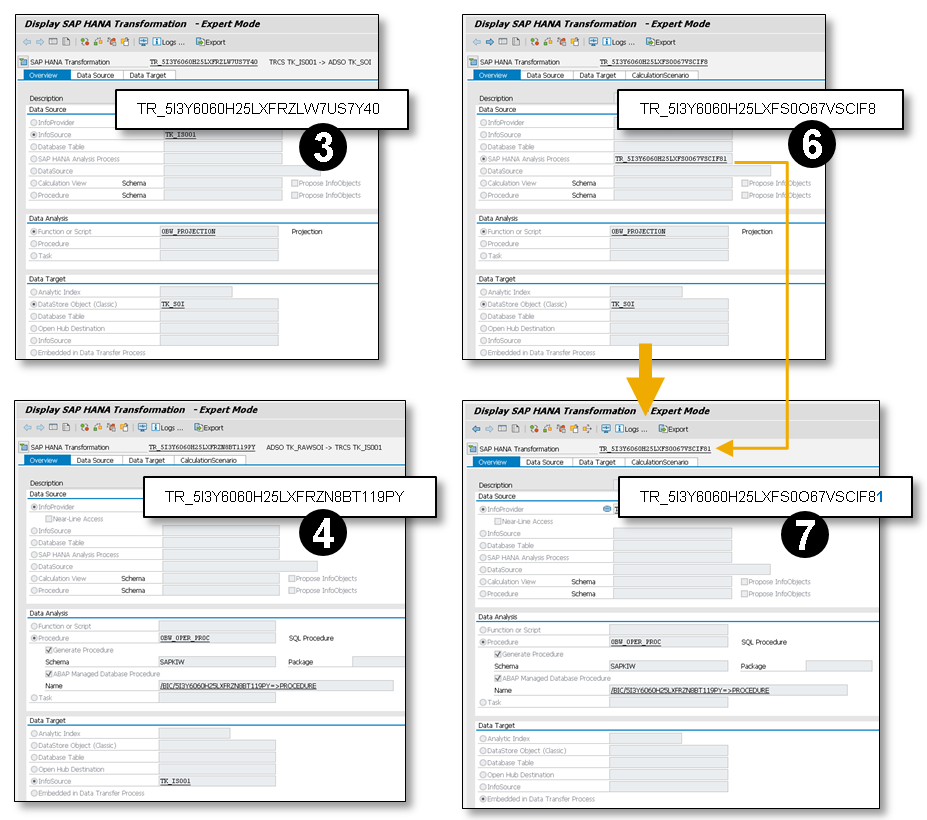 Later on we will need the technical IDs to analyze a HANA based BW transformation, therefore it is helpful to understand how they are being created.

The naming convention for the CalculationScenario is: 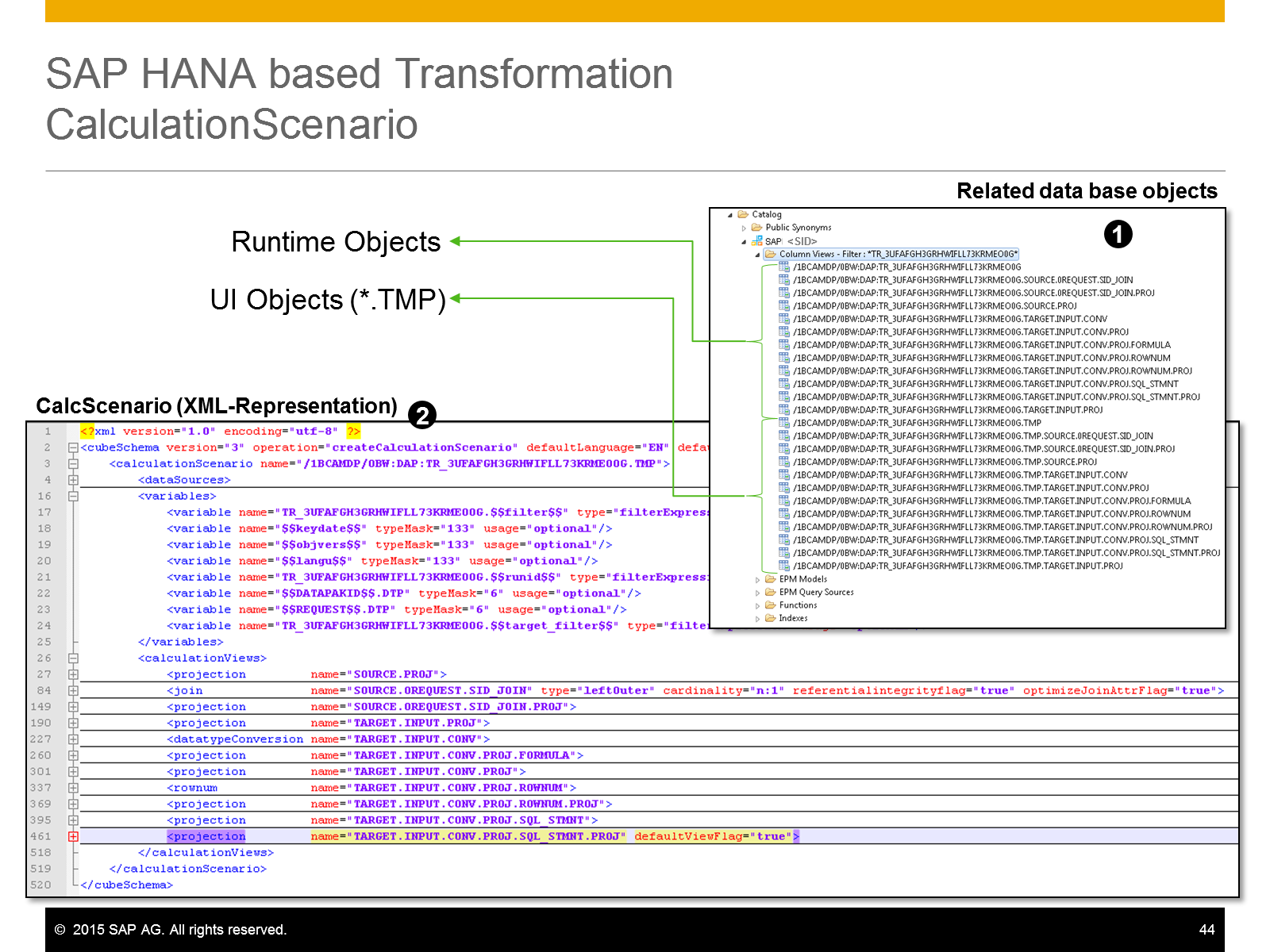 SAP HANA internally uses the JSON notation to represent a CalculationScenario. Figure 2.5 shows the CalculationScenario depicted in Figure 2.4 (2) in a JSON Analyzer. The tree representation provides a good overview how the different CalculationViews are consumed.  The JSON based CalcScenario definition can be found in the Create Statement tab in the column view definition in the SAP HANA studio. The definition can be found in the USING clause of the CREATE CALCULATION SCENARIO statement, the definition starts with ‘[‘ and ends with ‘]’. 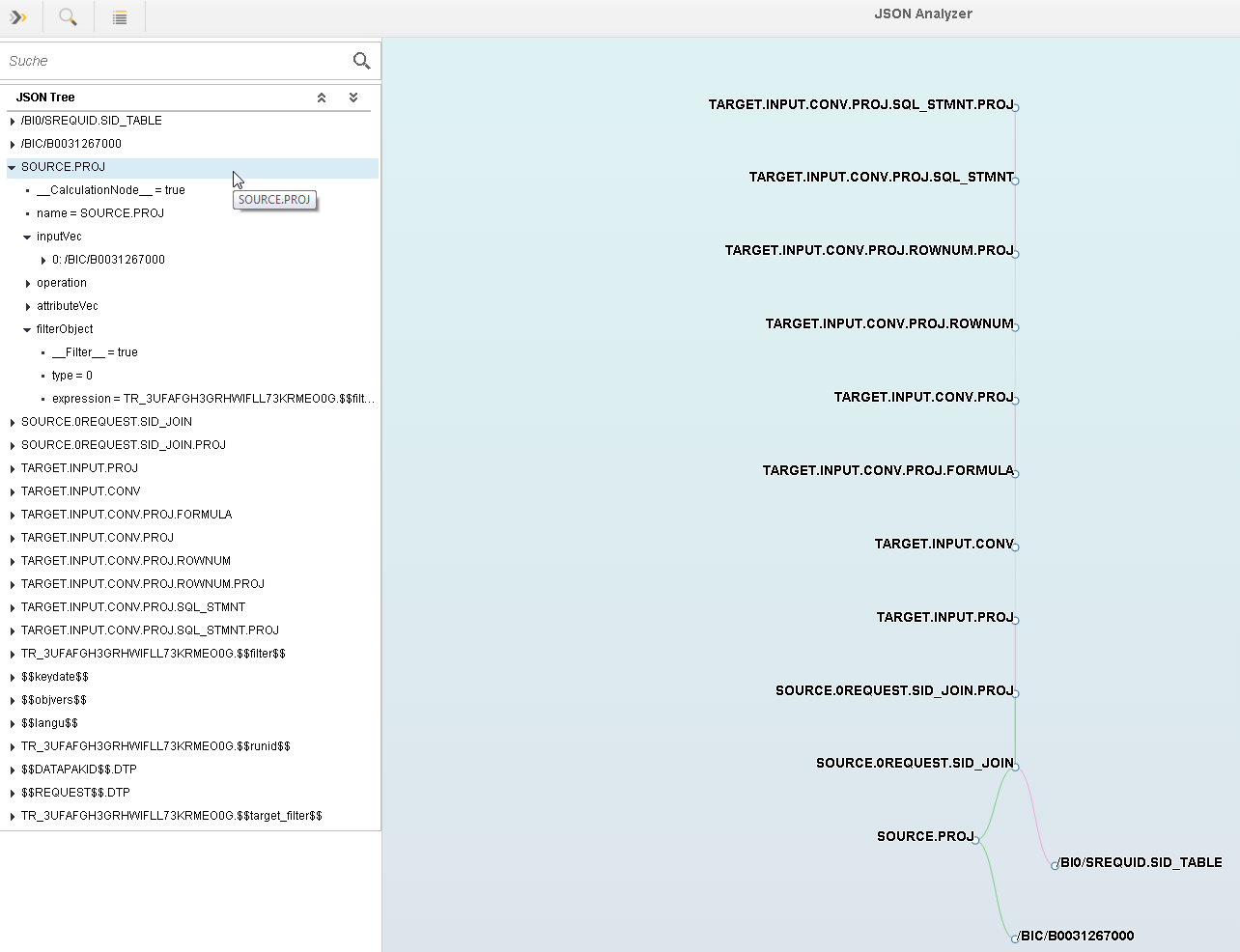 Figure 2.5: CalculationScenario in a JSON Analyzer

The SAP HANA studio also provides a good tool to visualize a CalculationScenario, see Figure 2.6. To open the visualization tool click on Visualize View in the context menu of a ColumnView based on a CalculationScenario. The visualization view is divided in three parts. The first part (1) provides a list of the CalculationViews which are used inside the CalculationScenario. Depending on each view definition there are more information about variables, filter or attributes are below the view node available.  The second part (2) provides an overview about the view dependencies. Which view consumes which view? The third part (3) provides context sensitive information for a view form the second part. Now we will have a deeper look into the following sub nodes of the calculationScenario node (see (2) in Figure 2.4):

In the first sample transformation, we only use a database table (tableDataSource) as the source object, see Figure 2.7. The sample data flow reads from a DataSource (RSDS), therefore the corresponding PSA table is defined as tableDataSource. To resolve the request ID, the SID table /BI0/SREQUID is also added to the list of data sources.

In the second sample a transformation rule Master data read is being used in the BW transformation. In this case an olapDataSource is added to the list of data sources. The olapDataSourceuses the logical index (0BW:BIA:0MATERIAL_F4) from the InfoObject to read the required master data from the real source tables, see Figure 2.8.

To read the master data in the requested language, object version and time the PLACEHOLDERS

The values for the PLACEHOLDERS are passed in the SQL statement by using the variables, see paragraph 2.3.2 »CalculationScenario – variables«.

The variables for the PLACEHOLDER for the variables keydate, objvers and langu are always set in the INSERT AS SELECT statement, whether they are used or not.

In the node variables, all parameters are defined which are used in the CalculationScenario and can be used in the SQL statement to filter the result, see Figure 2.10.

Figure 2.11 provides a further sample, based on a BW transformation, with several dataSource definitions. A variable is been used to control which dataSource and at the end from which table the data are read by the SQL statement.

The sample data flow for this CalculationScenario reads from an advanced DSO (ADSO) (based on a Data Propagation Layer – Template) with three possible source tables (Inbound Table, Change Log and Active Data). For each source table (dataSource), at least one view is generated into the CalculationScenario and all three views are combined by a union operation, see (2).

The input nodes are used to enhance all three structures by a new constant field named BW_HAP__________ADSO_TABLE_TYPE. The constant values

can later be used as values for the filter $$ADSO_TABLE_TYPE$$, see (3). The filter value is handed over by the SELECT statement and depends, for example, on the DTP settings (Read from Active Table or Read from Change Log). To read data only from the active data (AT) table the following placeholder setting is used: 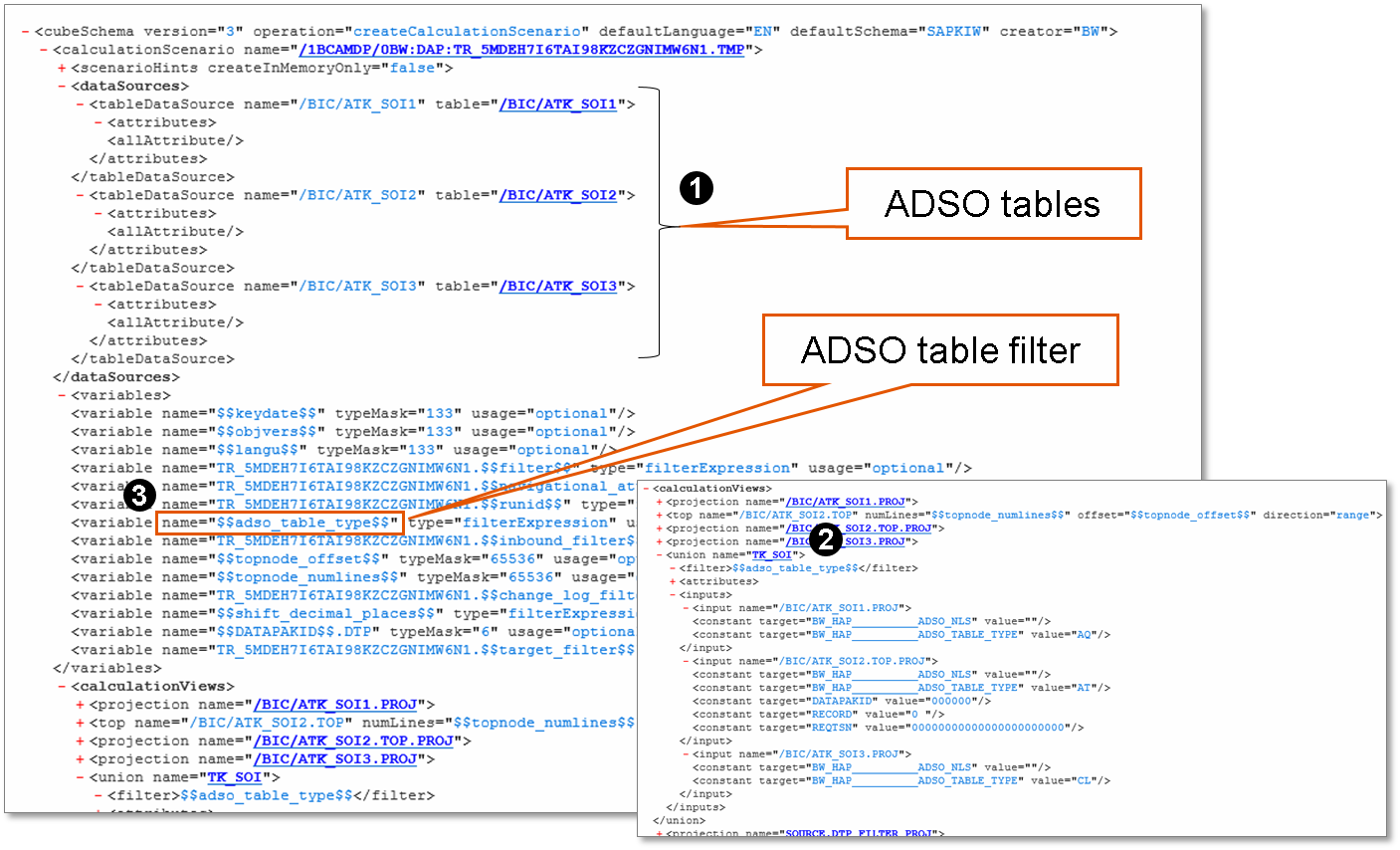 There are several view types which can be used as sub node of a calculationView:

The view types as well as the number of views used in a CalculationScenario depend on the logic defined in the BW transformation and the BW / SAP HANA release.

A SELECT on a CalculationScenario (ColumnView) always reads from the default view. There is only one default view allowed. The default view can been identified by checking whether the attribute defaultViewFlag is set to “true”. In the JSON representation in Figure 2.5, the default view is always shown as the top node.

The processing logic of each view is described in further sub nodes. The most important sub nodes are:

The used sub nodes of a CalculationView depend on the view type, on the logic defined in the BW transformation, and the BW / SAP HANA release.

The nodes viewAttributes and attributes are used to define the target structure of a calculation view. The node attributes is used for more complex field definitions like data type mapping and calculated attributes (calculatedAttributes ).

Calculated attributes are memory-intensive and we try to avoid them where possible. But there are some scenarios where calculated attributes must be used. For example, in case of target fields based on InfoObjects with conversion routines (see Figure 2.12) and in case of “non-trustworthy” sources. A “non-trustworthy” data source is a field-based source object (that is not based on InfoObjects), for example a DataSource (RSDS) or a field based advanced DataStore-Object (ADSO). In case of “non-trustworthy” data sources, the CalculationScenario must ensure that NULL values are converted to the correct type-related initial values.

A calculation view can read data from one or more sources (inputs). CalculationViews and/or data sources could be used as sources. They are listed under the node input. A projection or an aggregation, for example, typically have one input node, and a union or a join typically have more than one input node.

The input node in combination with the mapping and viewAttribute nodes can be used to define new columns. In Figure 2.13 the attribute #SOURCE#.1.0REQTSN is defined as a new field based on the source field 0REQTSN. 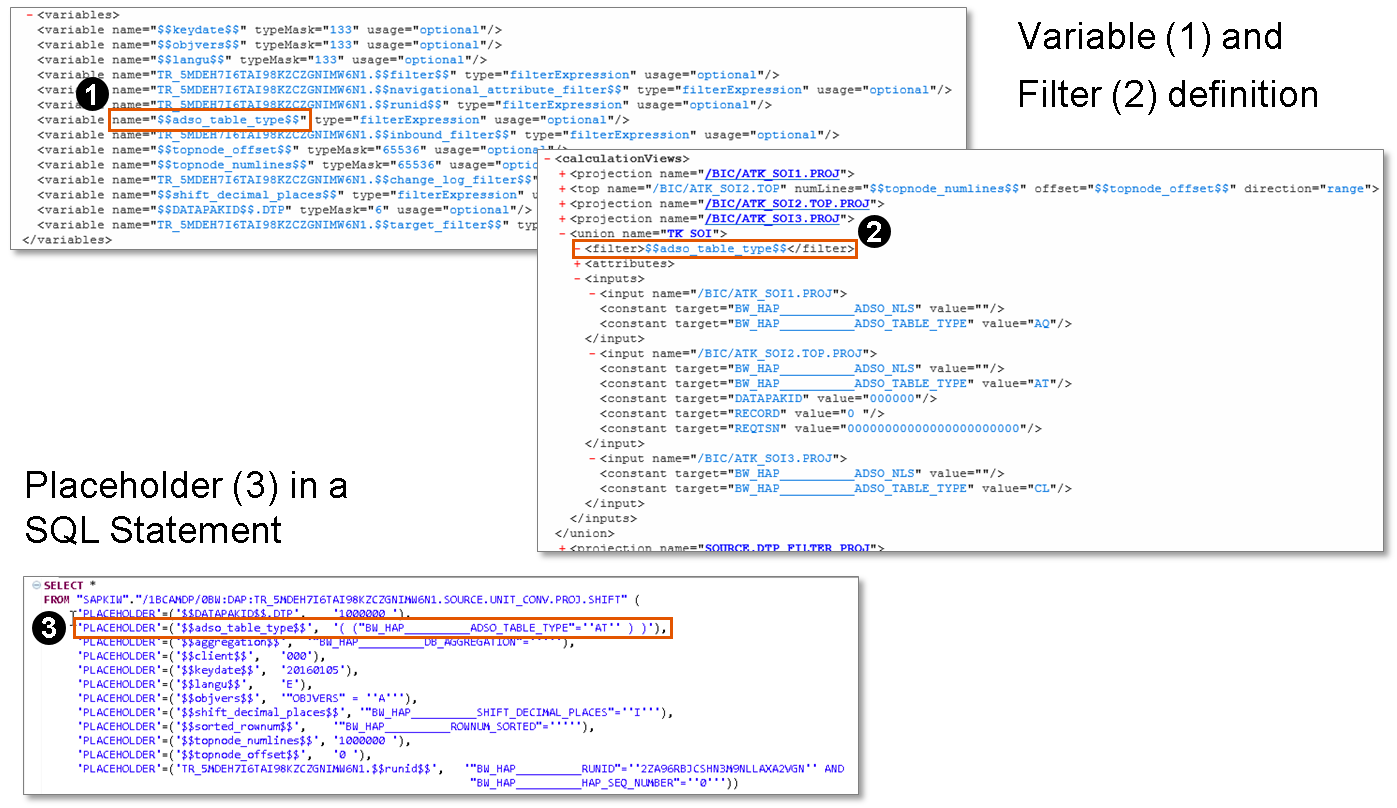 I will come back to the different views later on in the analyzing and debugging section.

Running a DTP triggers an INSERT AS SELECT statement that reads data from the source and directly inserts the transformed data into the target object. There are two kinds of filter options available to reduce the processed data volume: the WHERE condition in the SQL statement and the Calculation Engine PLACEHOLDER. Placeholders are used to set values for variables / filters which are defined in the CalculationScenario. Which placeholders are used depends on the logic defined in the BW transformation and the BW / SAP HANA release.

The following SQL SELECT statement, see Figure 2.15, belongs to the CalculationScenario as shown in Figure 2.11. The SQL statement passes the value for the variable adso_table_type. The placeholder

Some PLACEHOLDERS get the transformation-ID as a prefix to ensure that these PLACEHOLDER identifiers are unique, see placeholder $$runid$$ in Figure 2.15 and the calcScenarioDataSource description in the blog HANA based BW Transformation

Dear Torsten, I never thought we could deep dive so far into the HANA logic. And it seems for us (Customer) there is a lot to learn. Great Blog. Thanks Tjarko

Thank you for this great info Torsten. May I ask you to please shed some light on data packaging in HANA-based transformations. I see the SELECT-statement you provided doesn't have any instructions on package size etc. What if that SELECT is from a Calc View -- does the Calc View have to materialize all its data before select would take place? If so, what if it has so much data that it may not fit the memory limit?

If packaging is not possible, you're right. Out-of-memory situation are possible. Please check the note
2230080 – Consulting: DTP: Out of memory situation during ‘SAP HANA Execution’ and the ‘Request by Request’ Extraction

Thanks! Does it mean that if I build a Calc View with technical fields in it, I could access the packaging functionality? Alternatively, will it be possible in the later releases to push-down semantic partitioning to HANA?

Hi,
no the technical fields are in the source object. If you read from a classic DSO (ODSO) and you select the change log as source table there are technical fields like REQUEST, DATAPAKID and RECORD. These technical field can be used to read data in packages.
We had described this in the mention note 2230080.

Thank you for bearing with me Torsten. The scenario I tried to implement (in 7.5 SP03) was like this:

It actually worked and indicated better performance than ABAP-based transformation.

What I discovered runtime, judging by HANA memory consumption, is that the ETL executes in kinda two phases:
A. the Calc View materialized all resulting data first. At this time no activity has been recorded in DTP log, and I could only see memory consumption increasing in HANA admin cockpit;
B. the materialized data has been inserted into the BW target in packages, that activity being recorded in DTP log.

Obviously, if phase A materializes too much data, the process will run of memory and crash, hence I'd need to make it to somehow understand either REQUEST-DATAPAKID fields of the source, or use something similar to DTP semantic partitioning, that would be pushed down to HANA, so phases A-B would be executed a few times, each time for a single value of a partitioning characteristic.

Is this all realistic, or a dead-end not recommended by SAP?

I've read the note 2230080 but I fail to see how it could be applied. I guess I'd have to redesign points 2-4 of my implementation to use a SQL script based transformation (I'll use SP06 system for that).

Hi Roman, How are you? Long time no hear. A very interesting question you are rising here. Take care

Hi Philipp, I'm all good thanks, drifting into Hadoop/Spark/Scala area these days, actually. And you?

Regarding the questions I asked above, I finally ended up implementing what I mentioned - a wrapper that picks some semantic partitioning characteristic and runs the DTP-on-HANA a few times in a loop.