But for scenarios, where there is lesser time or limited resources causing hurdle in executing multiple mock-runs, SUM tool provides a really helpful solution to execute multiple iterations of only one specific downtime step (EU_CLONE_MIG_DT_RUN) in single migration mock-run.

This, not only allows you to do fine-tuning of identified performance bottlenecks, but also iteration of step during same run, with just one click of a button, would give you outcome of tuning you did to improve downtime. Let’s discuss a bit more technical down here on HOW it actually works & HOW to do it in real time:

In ‘Extraction’ phase of SUM-DMO, when PREP_INPUT/MIG2NDDB_INI step is executing at 2% progress, tool stops at known dialog screen asking for migration key. On the same screen, there available an option of ‘Test Cycle’ to Enable Migration Repetition Option (see below). 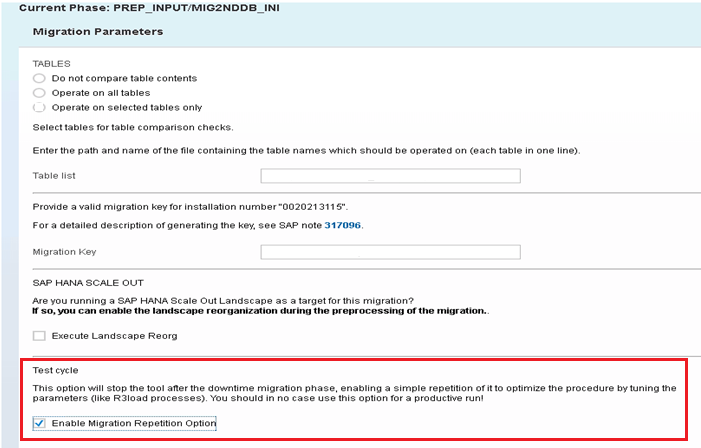 When you select above option & move ahead with migration process, everything works as usual till downtime phase.

At 67%, when tool finishes EU_CLONE_MIG_DT_RUN, it stops at dialog asking if you want to run iteration of same phase or not.

At this point, you can explore migration logs in details, work on identified performance bottlenecks and do any possible fine-tuning identified during first execution of EU_CLONE_MIG_DT_RUN.

Very common areas of improvement to look at this point are:

After optimizing all possible areas to improve downtime furthermore, repetition of downtime phase can be triggered from above mentioned screen.

This ‘UNDO’ operation is very quick, hardly takes any significant time & leaves target HANA schema in same state as it was at the time of start of phase EU_CLONE_MIG_DT_RUN. And after this, iteration of mentioned phase is restarted by SUM tool.

Once phase is completed, tool again stops at same dialog, asking to repeat it again for another iteration or continue to next phase of migration process.

In this way, SUM tool allows you to:

Repeat downtime phase as many times you want to repeat it

This functionality not only saves plenty of time, consumed by full repetitions (end-to-end) of SUM-DMO process, but also provides you an opportunity to analyze downtime logs in details and do performance tuning in mock-run.

We are running DMO for SUM 1.0 SP17 for ECC hana migration. During roadmap step extraction we did not select option - Migration Repetition Option.

We are currently in phase  MAIN_SHDRUN/ACT_UPG. Now we want  Migration Repetition Option.to be enabled. ( This is POC migration run).

We have tried from "SUM -> Utilities -> migration Parameters" option where we can select this option again and after clicking next it is getting success, however this is not reflecting.

From guide we can see adding line - /migrate_option/OPTIMIZECLONING = 0 in SAPup_add.par file will disable migration repetition option if it was selected during roadmap step extraction.

Just to confirm all, adding line  /migrate_option/OPTIMIZECLONING = 1 in SAPup_add.par works in case you forget to tick downtime repetition option during SUM preparation phase.