My first experiece with the PANKS-Tool / Performance Assistant

I just stumbled upon the blog Got an error message? The new tool PANKS is here to help you! (from 2014), again I thought instead of posting a longer comment, I might as well write a short blog on my first experience.

I didn’t know that functionality, in fact I have to admit that I didn’t pay any attention on the different buttons given in the “Performance Assistant”-window in the past.

In fact, I just now realize that I do call up the Performance Assistant on two occasions regularly:

Well back to my try in using PANKS (“Performance Assistant Note and KBAS Search”):

When I read about it, I immediately had a error-message and a corresponding SAP note in mind to try it out:

The situation is: trying to do LT0G on a HU-managed storage location

So, for the first time I payed attention to the buttons and clicked on the this one: 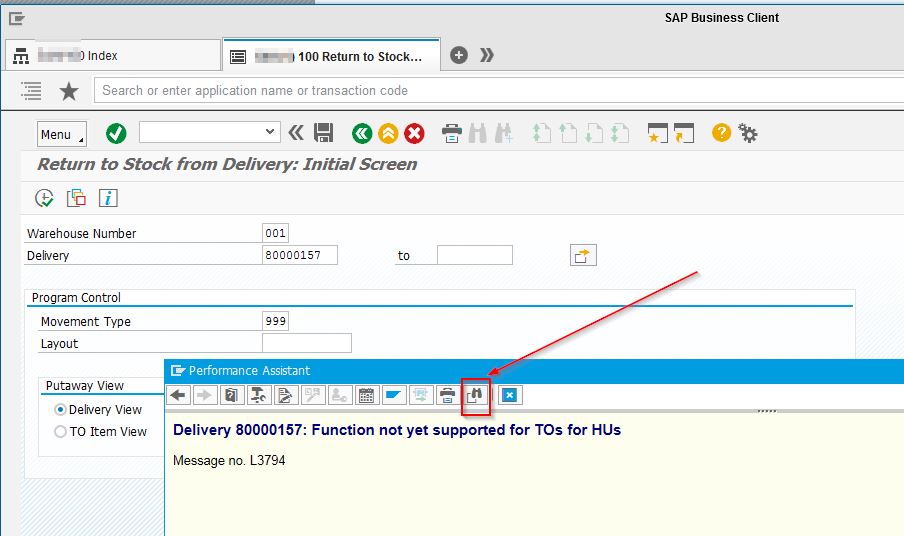 Unfortunately, contrary to my expectation, it didn’t find anything: 🙁 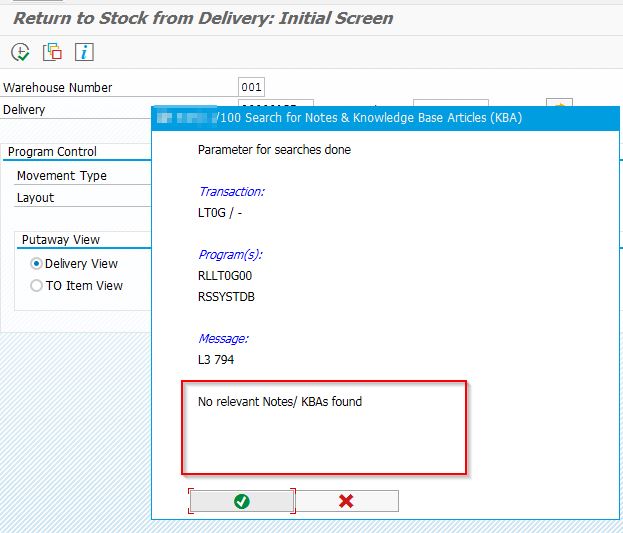 I guess it’s one of the examples where the quote “some adjustments to the SAP Notes and KBAS might be needed to get the best results.” from the above mentioned blog applies.

So PANKS and me had a bad start, nevertheless I’ll remember clicking that button next time I get an error-message.

Do you pay attention to any of those buttons? Did you know and do you use PANKS? Share, if you like!

Thank you for your article!.

Going to your example:

I managed to simulate the issue in our internal system and proceeded as indicated in the following KBA:2096401 - FAQs: Performance assistant notes and kbas search PANKS: 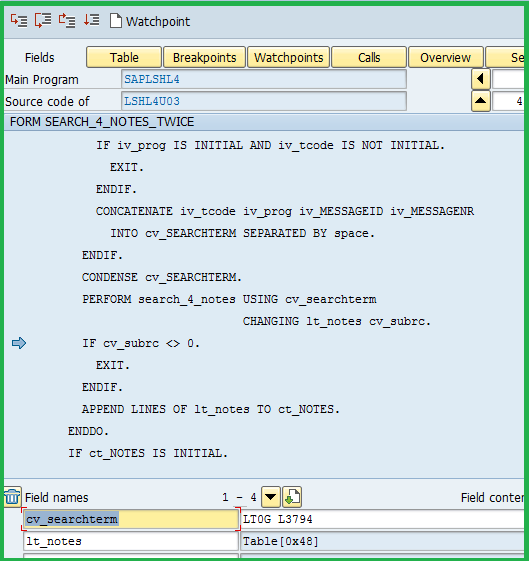 PANKS searches first with the error class and error number concatenated without spaces in between to avoid ambiguity: If you look for notes with L3 and 794, you get note 116181 that belongs to PY-AU (Payroll Australia).

I have contacted the KBA owner to add L3794 to the KBA.

thanks a lot for checking and giving feedback so fast, I really appreciate it!

I allready suspected that the space migt be part of the problem.

I'll update my blog once I see that this exmaple is working, now and I'll try to use PANKS more often in general!

PS: as to your screenshot you're still using the old debugger? 😉

That's true, right now the target KBA is not found.

I found a correction that works, strangely enough::

It's strange because the target KBA master language is English, so I would appreciate if you can open an incident with component BC-DO-HLP. Thanks for your patience so far,

I don't like Launchpad taking away something that was there and was used for many many years: ability to specify search language. And if the "thing" still finds 2 or 3 notes depending on which profile language I have chosen for the same search term (L3 794), I absolutely detest this innovation/simplification. 😯

To be honest, the 3rd result in German is irrelevant, yet I suspect the extra find(s) might be irrelevant in this particular case only...

Edit in: on second trial, I don't see the different results for L3 794 when changing profile language... I must have missed to click "display unfiltered" in German.

I guess the note search you do in the launchpad searches into the new notes toolbox. However our ASTs (ANST, PANKS and ST22) are still going to the old repository, waiting for the migration of the search function, which is planned for 2016. This fact may explain the differences you find. Your feedback regarding the note and kbas search you do in the lauchpad is important, but I can do nothing regarding launchpad. There has to be a discussion forum here at SCN where your comments will be taken into account.

Continuing with Joachims example (My initial answer was not 100% correct):

1. One of the reasons why no notes nor kbas were found was related to the language. It worked changing "EN" by "DE". Once I fix this, notes and kbas are found.

For Joachims example this is what happens (IT works with the algorithm specified in note 2020356): PANKS tries to search for notes and kbas several times until it gets a result:

This means that if we did not have had the "language" issue, the KBA 1613959 would not have been found anyway.

Of course there may be more relevant notes and kbas, but as they will not be found unless:

2. Or the search algorithm is changed so that after trying with:

Then it tries with:

Now, as to how to proceed with the language issue, I think a correction will be needed. Simply replacing "DE" by "EN" seems to me a little dangerous (not always it happens but seems that oinly for certain notes and kbas), so until the root cause of the issue is found, the safest would to search first with language "EN" and if nothing is found then do the same search but changing the language to "DE". Anyway, the case has to be reported in a BC-DOC-HLP ticket. Then the developer responsible for the Performance Assistant will take a decision.

Sorry...You are right. Actually PANKS is trying to search either with L3794 and L3 794, but there is something else that prevents the KBA from being found. Please let me investigate but it seems that a correction might be required.

I will come back with more info asap.

P.D. Although L3794 and L3 794 are both valid for PANKS, it's always better to use L3794, together because there is lower risk of ambiguity.

Thanks for this post. I've made a small summary of SAP Note search tools here: https://www.linkedin.com/pulse/automated-sap-note-search-quicker-incident-resolution-tam%C3%A1s-holics

Thanks for making a summary!