Just finished up a CodeJam in Medellin, Colombia, and here are some of the highlights!

Arriving in Medellin is a great experience.  The city is in the Aburrá Valley, and the airport is on the other side of the mountain from the city.  Santiago, our host, picked me up from the airport to make the trip in to the city.  It’s a great drive – and the view is just amazing, with the entire city glowing in the dark below you – but the mountain road has many loops and turns, so be sure to hold on tight! A trip to the Universidad Nacional de Colombia, and a few minutes getting the room set up, and we are off and running.  Our first day is spent learning about SAP UI5, and getting started with the HCP Web IDE.

Although my Spanish is poor, the class did a great job of translating for me when things became confusing.  We started with a few hours of introducing the basic concepts of SAP UI5, from the most basic HelloWorld project (a template that is empty).  The students did a great job of getting the Web IDE set up, and quickly had the web pages loading data from Northwind ODATA source.  They quickly learned about the Inspect Tools in Google Chrome, and a few had passed that point by the time we reached our first break. 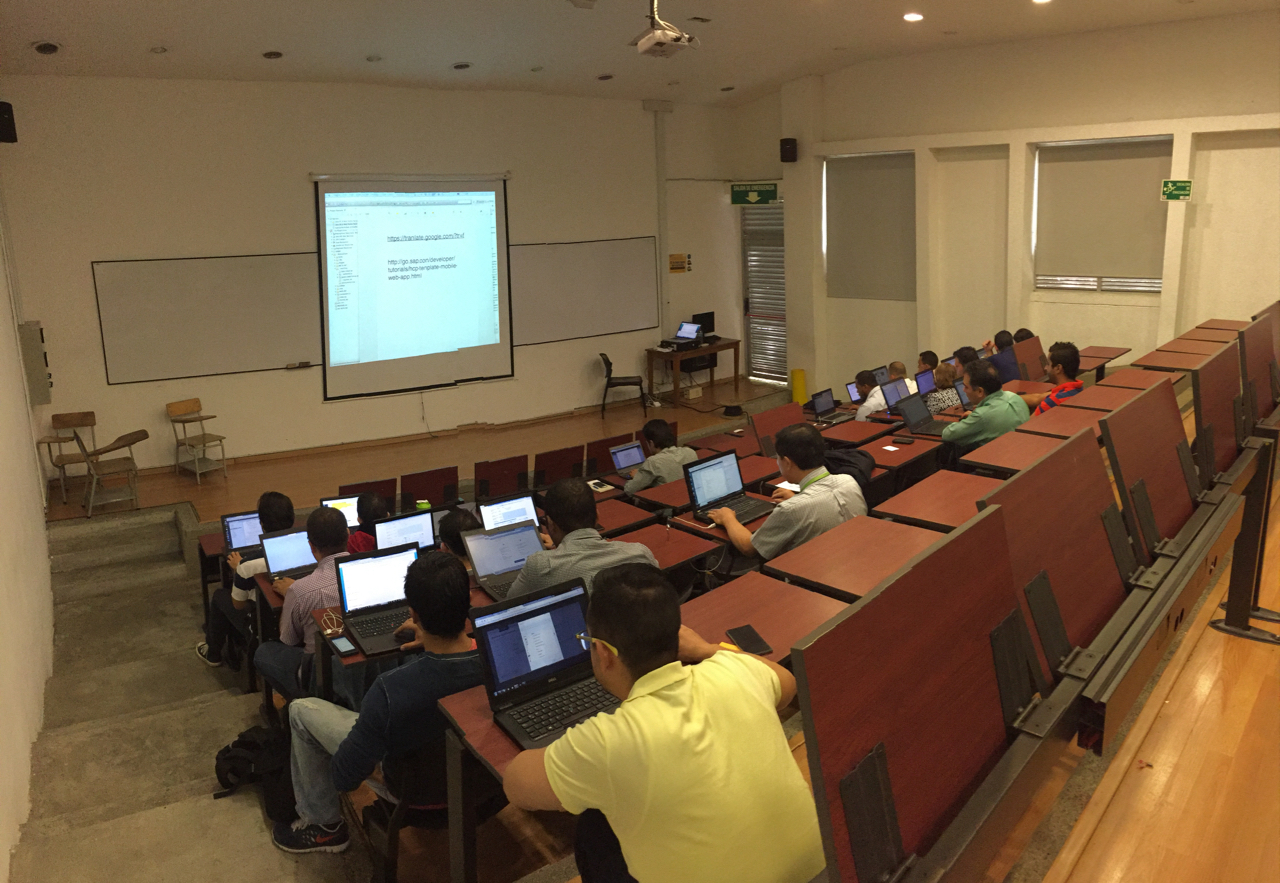 After the break we had a good discussion on how SAP UI5 is a code-centric model, and then described how you can compare UI5 to Angular.js (which is an HTML centric model).  After many good questions (mostly on which is better for which type of project), everyone continued with the work on the UI5 project.

The students, who helped each other overcome most problems, were quickly finished with our first tutorial.  Then, I encouraged them to try the great new HANA Cloud Platform Mobile tutorial (written by my good friend, Jim Jaquet), which also uses UI5.  The combination of both tutorials covers a lot of the controls, and helps to show how UI5 can be used for both web and mobile device development.

The attendees made short work of that tutorial as well. As we reached the end of a busy day, they were proud to show me the tutorial running on their iPhones and Android phones.  Everyone was excited that they had come in for web, and had experienced mobile as well!

Day 2 – Time for HCP with JAVA

The next day we started bright and early, and even though it was Saturday, most of the attendees returned to try some Java with HANA Cloud Platform.

We spent most of the day working through the WeatherApp tutorials (written by another friend, Matthias Steiner).  The Eclipse based tutorials had everyone connected to HCP within a few minutes (thanks to the HCP Eclipse plugin), and then they started working on creating Servlets and a back-end REST application to serve data from the cloud to a web client.

Many people in the class quickly realized that they could use the Java application with the SAP UI5 from the previous day, and I was surprised to find several of them connecting the two applications together before the day ended.  Nice job!

The class quickly worked through the materials, and asked to take a lot of the breaks as early as possible.  Then, around 2 pm, we finished up the class.  Just in time for…

That’s right.  The Copa America Centenario is going on, and so everyone wanted to get to the stadium (or a TV) to watch the matches.

The USA (who were firmly defeated by Colombia 2-0 earlier in the match) played first.  I had the chance to watch the USA – Paraguay game from a TV in the hotel, and it was a good match!

And then, a few hours later, Colombia played Costa Rica.  Costa Rica quickly scored, but Colombia came back.  And then, in a very difficult and well fought match, Costa Rica scored one last time to win the match 3-2.  As you can imagine, everyone watching on TV were unhappy.

Even after the loss, however, Colombia is tied with the US at 6 points each in the tournament.  They will play Peru in the quarterfinals on June 17.  Good luck!

(I will still be cheering for USA!  Everyone was nice to me, though, at the hotel, so I hope that Colombia does well, too.)

Unfortunately, it was quickly time to leave Colombia behind.  Thank you, Santiago, for the great hospitality, and to everyone who attended the CodeJam’s.  It was great to visit Medellin (it is a beautiful city) and I hope to get back soon.