The June update is a little later than usual but better late than never! There were quite a few different initiatives being pushed during the last month including one which focused on the maintenance and updating of existing KBAs and Notes and this has resulted in noticeably fewer new Notes/KBAs being created. However, there are still a few interesting new additions. I mentioned in my April update that we were seeing quite a few portal upgrades from EP 7.0X to EP 7.30 and higher and that this was to be expected. The Hot Topic for that month focused on some of the migration issues which might be encountered in relation to the Web Page Application (WPC) but this month I’ll be taking a closer look at some of the more general KM Migration issues we’ve been encountering recently.

2172653 – Classification of documents not working

This note refers to a coding issue which might cause documents to be classified incorrectly when when using the linguistic search mechanism. Unusually for a coding issue such as this, all portal versions from EP 7.0 to EP 7.50 are affected. The fix is included in a patch.

The KBA has been created to describe an issue whereby you might encounter an issue with KM Upgrade due to the KMC_UPGRADE_UM missing in the Database. I’ll be describing this further in this month’s Hot Topic below.

This is a coding issue present in the more recent portal releases and indeed I’ve seen several incidents being raised recently for this specific issue. File System repositories configured with the ‘jCIFS activated’ flag may see ‘access denied’ errors. As custom created file system repositories are used very commonly, it’s especially important to be aware of this note.

This security related Note refers to an issue which has now been addressed regarding the specification of additional HTTP request parameters in the KM Documents Servlet. This vulnerability is fixed through the patch described in the note.

This issue results in the background color of Tables included in WPC articles not being displayed. It should be noted that the issue only occurs when accessing the table outside of a WPC page or outside of the editor, eg. when previewing such an article stored in the ‘Global Shared Content’.

While most issues relating to portal migration are generally not related to or caused by the Knowledge Management application there are a couple of commonly encountered issues which are. I’ve long lost count of the number of times I’ve seen incidents relating to the following so I can virtually guarantee that whether you are a customer upgrading your system or a SAP engineer assisting customers with their upgrade issues, you will probably encounter at least one of the following at some point.

The portal favorites are missing!

I’m starting with this issue as it’s probably the most common one. And rightly so – this is not an issue which may be encountered when upgrading your system. If you are upgrading from EP 7.0X to EP 7.30 or higher then you will most definitely want to be aware of the following as it affects every such upgrade.

First, I’d better explain exactly how the Portal Favorites work. The /userhome repository contains a folder for each and every user who has logged into the portal. This folder is created automatically by the system and for each user, this folder contains user specific information such as documents they have added to the wastebasket, documents they’ve added to their personal ‘My Documents’ list, and the links they’ve added to their Portal Favorites. The Portal Favorites iView itself is essentially a user specific navigation iView which is pointed to the logged in users ‘portal favorites’ folder in their userhome folder. Therefore, any links which are present in this folder will be displayed in the iView.

In the example below, the following entries are in the favorites folder in the location created for the user ‘ep7adm’ in the /userhome repository –

When logged into the portal, the ep7adm user sees the following in their Portal Favorites iView – 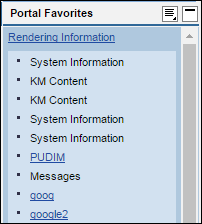 Basically, prior to EP 7.30, the users folders in the /userhome repository were named simply /userhome/<Username>. This format could not guarantee that the ID of the folder would be unique (which is a necessity in this scenario) so the decision was made to change this in EP 7.30 and all portal versions since. In these systems, the users folders are now in the format USER.PRIVATE_DATASOURCE.un:username.

So what does this mean? When a user logs into the upgraded portal for the first time, the system performs a check to verify if they already have a folder in the /userhome repository. It will check for this in the new format though, and if you’ve just upgraded then the user’s folder will be in the old format and will not be detected. The system will then create a folder for the user (using the new format) and this will now be empty. When the user checks their Portal Favorites iView, it will now also be blank as this is configured to point to the new userhome folder.

While some customers may not use the Portal Favorites iView, or may not consider the loss of previously existing favorites to be a major issue, there is a solution available. The KM Development have created a ‘Favorites Ranaming Tool’. Running this tool on the system will basically rename all the old userhome folders so that they now match the syntax used in the new portal. To obtain this tool, a customer incident needs to be raised in component EP-KM-CM and the KM Engineer will be able to provide this to you in the form of an EAR file which needs to be deployed on your system. Once deployed, the tool is very easy to run and the exact steps to do so should be provided by the engineer.

The KMC_UPGRADE_UM table does not exist

While the Favorites issue above will not prevent or affect the actual upgrade process itself, the migration process may encounter this problem in the ‘Run Source Online Migration’ step of the upgrade process. It can be confirmed that the cause of the issue is due to the missing KMC_UPGRADE_UM table if the following exception is written to the trace –

If this issue is encountered, then it can be resolved by deploying the SDA file attached to KBA 2327416 – Error occurs during MTI_SAP_COM~TC~KMC~RF~UMMIG . After deploying the SDA as described in the KBA, check the DB to ensure that the table now exists and you should be able to proceed ahead with the migration.

Errors in the Component Monitor after Upgrade

There are several repositories and services (plus associated commands, command groups etc) which were present in EP 7.0X which have now been made redundant in EP 7.30 upwards. In fresh installations, there will be no evidence of these in the system but for systems which have been upgraded from EP 7.0X, the old configuration objects will still exist but are no longer used. This will result in several errors being displayed in the component monitor (primarily in the ‘repositories’ and ‘services’ areas) and exceptions being written to the default.trc. These errors have no functional impact and can be ignored but if you so wish (and I would consider best practise), you can easily clear these errors by following the steps outlined in KBA 2078850 – Component Monitor Errors after Upgrade

Primarily, these errors will relate to the following (in the component monitor) –

You will likely also see a lot of exceptions relating to tasks repository in the trace or relating to the task UI commands.

There are several other known issues which might be encountered during the migration process so if you do indeed see one of these, my recommendation is to check the exception being generated in the logs and to perform a Note Search for the error message. Usually, this will return a hit and the instructions within the note should be followed to resolve the issue. Before I finish up though, there’s one final point I need to address….

In the past, there were several issues which might have been encountered during the migration process one possible solution (to allow the migration to proceed) was to remove the component causing the issue from the MIGRATIONAUSF.LST file and then continue. While it was only ever recommended to do so if you were not using and did not intend to use the application (whether it was KM or WPC), this would generally not have been considered ‘best practise’. Now, I would say that you should never do this. In fact, SUM has been updated so that if you should remove anything from the MIGRATIONAUSF.LST file the migration will be unable to proceed, regardless of how you have changed it. Instead, you will receive a message indicating that SUM has detected that the MIGRATIONAUSF.LST file has been modified and the migration cannot move forward. Instead, it is always best to try to locate and correct the root cause of the issue rather than performing a hasty workaround by excluding the problematic component from the migration process.