Data Visualization on Cost of Living – International Students in Australia

Cost of Living for International Student

According to Australian Government – Department of Education and Training, there has been 421,258 international students so far in Australia in 2016. A 12% increase in the students than last March 2015,wherein China ranks first, followed by India, Malaysia, Vietnam, South Korea and Thailand. There has been 459,621 international enrollment so far in 2016, according to the enrollment statistic, students are getting enrollment in different education sectors.

While an important factor that need to be considered when a student plan to study is that how much money that one can have in order to be comfortable. There are many things that come into process, we are going to explain Cost of Living – in this blog. So they are able to make a formal decisions before coming to Australia and be able to plan their budget.

As a students of Victoria University, we received an opportunity to study on the cost of living for the international student in Australia, with the help of the Data Visualization using SAP Lumira software, we are going to explain the cost of living in Australia – according to the distribution of expenses, the salary they earn and comparison with USA, USA is another attractive country in the world wherein many international students prefer to study.

Cost of Living depends on the lifestyle of an individual, According to Michael Janda, Australia tops the chart as the world’s expensive country than US and even in the term of consumer goods and services it dominates over the market. Aussies pay top dollars for basic amenities. The graphs shows the comparison of Australia according to consumer good. In Australia the consumer price index is 99.32, whereas in USA is 76.53.

In terms of housing- Rent index, the prices are increasing every year. Changes in the housing prices can affect the behavior of the international students, as it will led to an increase in their accommodation cost. The following graph shows the rent index comparison between Australia and USA.

We discussed about Australia vs USA in terms of rent and consumer price index, Now the following blog will be discussed more in details about Cost of Living in Australia.

The following figure shows the top seven cities in Australia according to the students enrolled in the year Australian government 2014. Melbourne ranks first followed by Sydney which has the second highest international students, Gold Coast is the least among all. 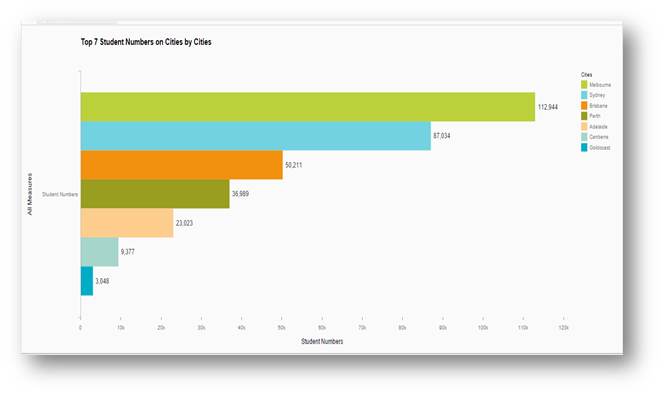 There are many international students coming to study every year in different cities, price index differs from one city to the other. The following graph explains the price index according to the cities. This graph would be useful for the students who are planning to visit Australia for study purpose. Sydney tops the chart been the costliest city, it has price index 211, followed by Melbourne 204, there is not much difference between the price index of Melbourne and Brisbane, whereas the Gold coast is the least expensive with price index of 165. Significant concern are for expenses that students incur to purchase the goods and services that is necessary to maintain a certain standard of living. There has been increase in the prices on many items which may led to increase in cost of living. To know the average cos of living is very important when students are planning to come Australia to study. The department of Immigration and Border Protection advises that the annually living cost is $20,000.

To analyze the expenses we have collected data from the main categories such as market, clothing and shoes, rent, restaurant, sports and leisure, transportation and utilities. Rent tops the chart, as we all know the housing prices are increasing, which led to an increase in the rent in a way accommodation cost for a student. Clothing and shoes is another major expensive but it can be avoided if the students can plan their budget. The following figure shows the chart of distribution of expenses according to descending

To know more in details we have sub categories for the distribution of expenses, the following excel chart shows in details, according to the basic amenities that a student would require in his day to day life. 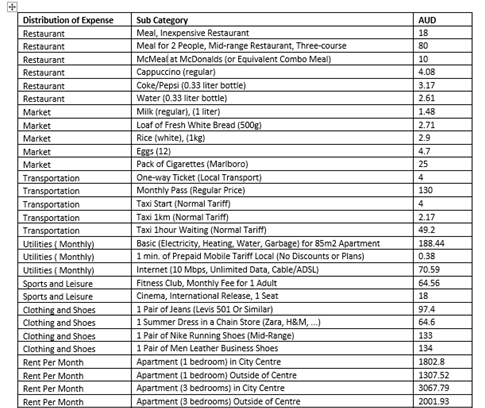 The following pie chart explains that utilities tops the chart- utilities include internet and mobile expenses, internet is much needed for the students as the studies is completely based on internet. On top of that electricity and water is another major expense for students. Nowadays many students addicted to smoking, it is said that due to mental stress and depression – away from the family, there has been increase in the smoking habits intakes. The other market commodities are at nominal price which is affordable. It is said that  food, clothing and shelter are the basic amenities for all human being. The following is the average market price for the basic food consumption that a student would need for daily consumption which includes cappuccino (Coffee), coke, eggs, loaf of bread, milk, rice and water. 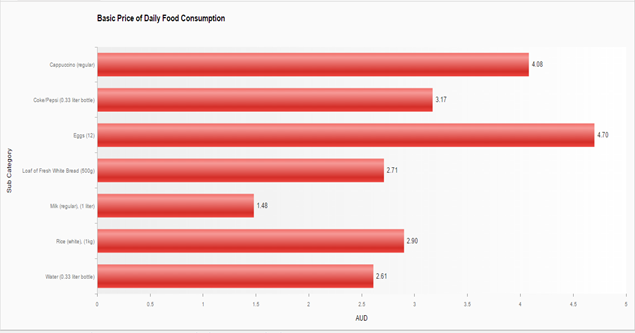 We are the students of Victoria University, there are few statistic that the university has provided on the cost of living for international students. Course fees may be different amount for different courses, approximately its $18000 annually, whereas overseas health cover would be $900. Course resources and study material would cost $650 annually. Accommodation cost $10,400. Food and groceries $5200 and travel expenses would be $1716. So the university clearly indicates that the accommodation is expensive in Australia followed by the food and grocery. Travel expense is moderate but as Victoria University provides My Multi options for students, it makes traveling less expensive. Fees is less as compared to other universities and it is paid upfront while taking the admission. 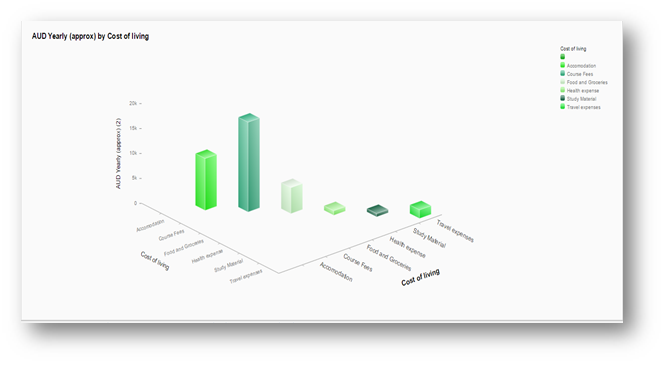 So, we would like to conclude it by stating that thousands of international students work and live comfortably in Australia, it is the best place to live in and study, in the terms of safety and they have an exposure to different cultures. But the fact is, it is one of the expensive country to stay and study in due to high fees and cost of living.

But at the same time, Australia has a competitive advantage over the international education for example post study work rights that allows the student to work for 20 hours weekly along with their studies to fulfill their basic needs while they are studying in Australia. Moreover if you opt to study in Victoria University, as we would recommend to study in our university, as we have the best professors and homely atmosphere which makes us comfortable to study and motivate our self to achieve our goals.

This is an interesting analysis.

What motivates international students to attend school in Australia?

And sorry for the delay in replying you back..

The following are few reasons that motivates a student to study abroad: