SAP Gateway consist out of several add-ons. Some of them are mandatory while others are only optional and some are even legacy. A complete list of SAP Gateway add-ons can be found in the SAP Online Help Installing SAP Gateway Components – SAP Gateway – SAP Library

In addition it is also possible to uninstall the add-on

which has been a prerequiste for the installation of some of the add-ons mentioned above.

In the following two pictures these uninstallable add-ons have been marked with red. 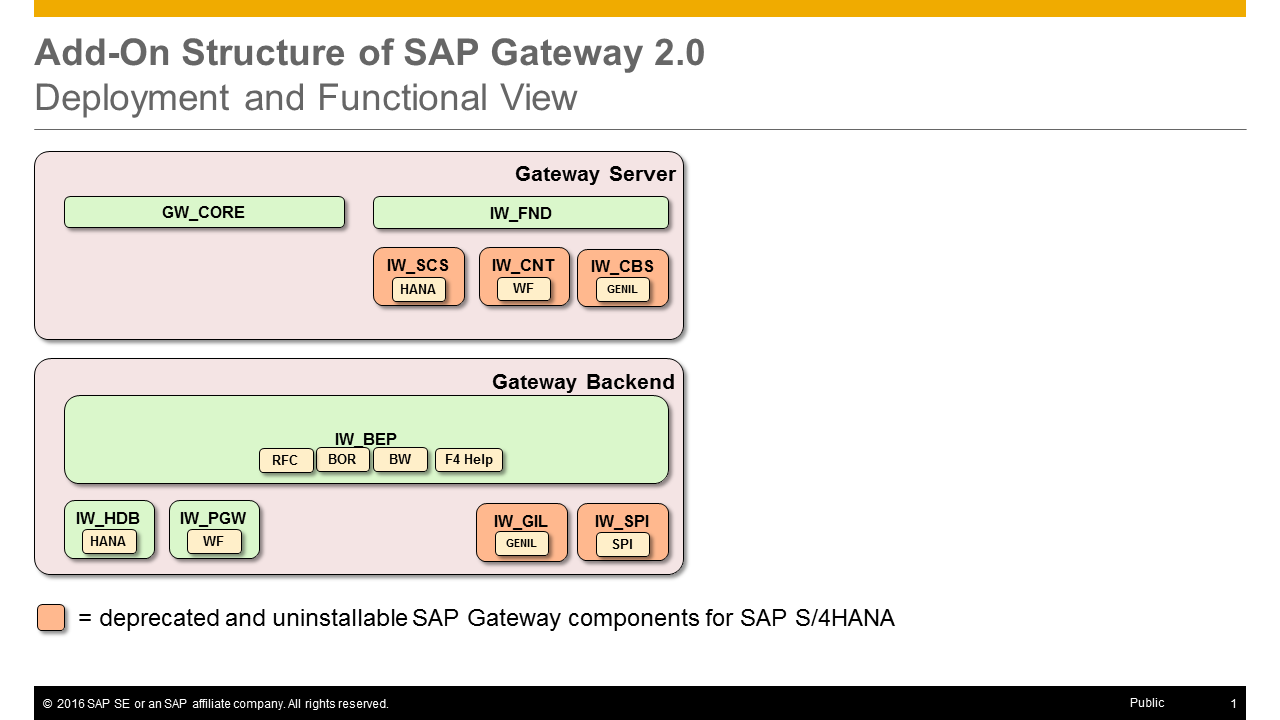 The add-ons GW_CORE, IW_FND, IW_BEP and IW_HDB are not uninstallable since their content became part of the software component SAP_GWFND which is part of the SAP Basis as of SAP NetWeaver 740. 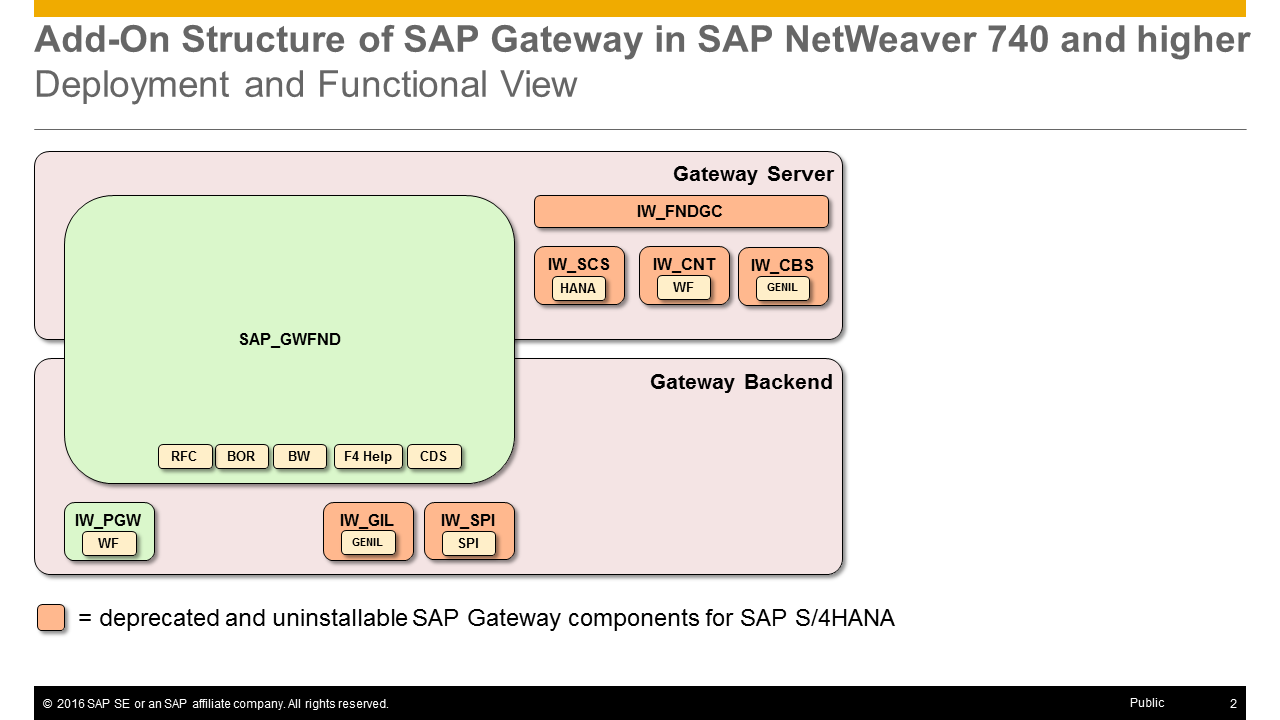 With SAP NetWeaver 751 the add on structure for SAP Gateway becomes even more simple. Please note that IW_PGW which is used for SAP Fiori applications such as the MyInbox is included in the coding of the software component SAP_GWFND 751 as well. As mentioned above there are two reasons why you may want to remove an SAP Gateway add-on:

1. Remove add-ons that are not needed

As said, some of the add-ons only contain legacy functionality such as the screen scraping generator (IW_SCS) as well as (outdated) content which is based on the so called generic channel (IW_CNT and IW_CBS). Therefore you can uninstall these add-ons unless you are using services that are based on these legacy components. See SAP Note 2312680 for more details.

The add-on IW_FNDGC is only needed for customers using the above mentioned (outdated) services based on the Generic Channel when they upgrade their SAP Gateway Hub to SAP NetWeaver 740. This is because the add-ons IW_CNT and IW_CBS do depend on components that are shipped with the add-on IW_FNDGC. Therefore you can uninstall this add-on as well once you have uninstalled the add-ons IW_CNT and IW_CBS mentioned above.

This leaves us to the add-ons IW_GIL and IW_SPI. These add-ons were developed to allow customers to generate OData services using SEGW in a process called redefinition based on Service Provider Interface objects or GenIL objects. Customers that have installed these add-ons but are not using any service that has been generated based on these add-ons can benefit from the uninstallation option as well.

With the transition to S/4 HANA it was decided to not support all add-ons of SAP Gateway since not all of them are used within S/4 HANA and are thus not needed to build OData in S/4 HANA. As a result it was necessary to make these add-ons uninstallable so that they can be uninstalled before starting a transition of a customer SAP Business Suite System to S/4 HANA.

When attempting to select upgrade of your system from SAP NetWeaver 7.40 to 7.51 INNOVATION PKG in Maintenance Planner, you eventually receive an error, ” Validation of software packages failed. Please check the logs”.

When checking the logs you find the error message “SAP WEB UIF 747 is required to upgrade to SAP WEB UIF 748 by – SAPK-750BHINSAPABA during the queue check.”

Software component version SAP WEB UIF 747 is part of Product Version SAP Gateway 2.0 and instance  Gateway Server Core NW 740 which is not supported for the target you had chosen which is NW AS ABAP 7.51 INNOVATION PKG.

As a result the upgrade cannot be performed.

How to remove an SAP Gateway add-on?

As described in SAP Note 2011192 – Uninstalling ABAP add-ons as of Version 0053 of the SAP Add-On Installation Tool, not only can you install ABAP add-ons, but you can also uninstall them again in certain circumstances.

As of version 0061 it is now possible to uninstall the above mentioned SAP Gateway add-ons using SAINT.

As of version 0064 it is also possible to uninstall the WEBCUIF addon.

After you have updated SAINT to at least version 0061 you can upload the ACP into SAINT directly from your front end. As described in the note above you do not have to import them. Instead, they already take effect when you upload them into the system when you use the function “Load From Front End”) so that they show up in the tab “Deinstallable components”.

The following screen shot shows SAINT after the above mentioned ACP IW_SPI====200 has been uploaded. 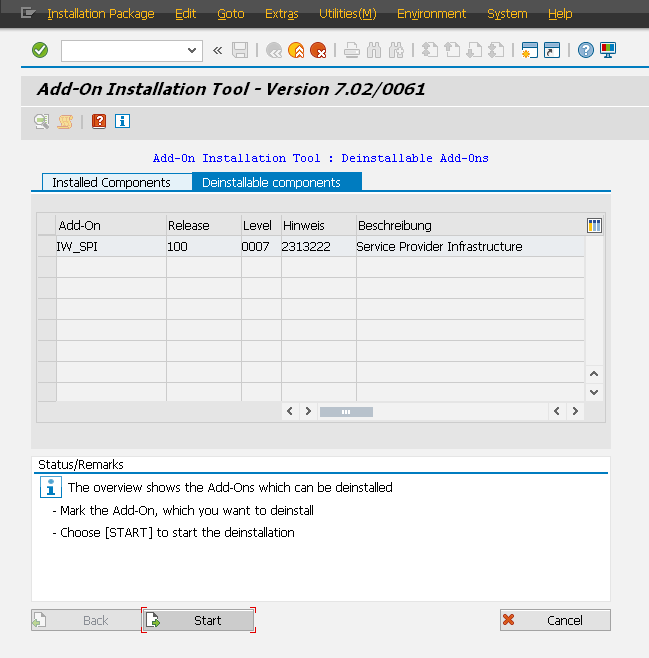 You will find more detailed information about the uninstallation procedure and the technical prerequisites in the following SAP Notes:

We are upgrading our system to 7.51 version of SAP, however we are unable to uninstall the IW_FNDGC component. Additionally, we have also implemented the following note: 2447674.

We already unistalled the following components:

Please open a customer message and send the message number directly to me.
I assume that SAINT tells you that an error occurred during the phase COLLECT_OBJLIST.

Error message: The deletion of objects of other software components is not allowed

So we would need to know which objects these are in the format that SAINT used:

Thank you for your promt response.

I will open a customer ticket and I will forward it directly to you.

The customer ticket has been created and here is the ticket number: 194131 / 2018 Unable to uninstall IW_FNDGC comp.

Thank you for your support and best regards.

you have posted the SAP internal link to Note 2011192 in you post and not the external.

thanks for the hint.

I updated the link.

In the phase IS_SELECT, I chose the option to delete the add-on actively using a SAINT package.

The response from SUM is that it cannot find a SAINT package that fits to add-on IW_CBS (for example).  I have extracted the installation files for IW_CBS to the EPS folder, but this did not help.

Do you have any hints for me on how to proceed ?