Target mapping is part of the SAP Fiori launchpad configuration. It defines the target application, which is launched when clicking on a tile, on a link or within an app-to-app navigation.

This is an important simplification of the target mapping configuration with an additional positive impact on the performance. Therefore, the general recommendation is to define navigation targets without using LPD_CUST.

A Fiori tile catalog can include two components: 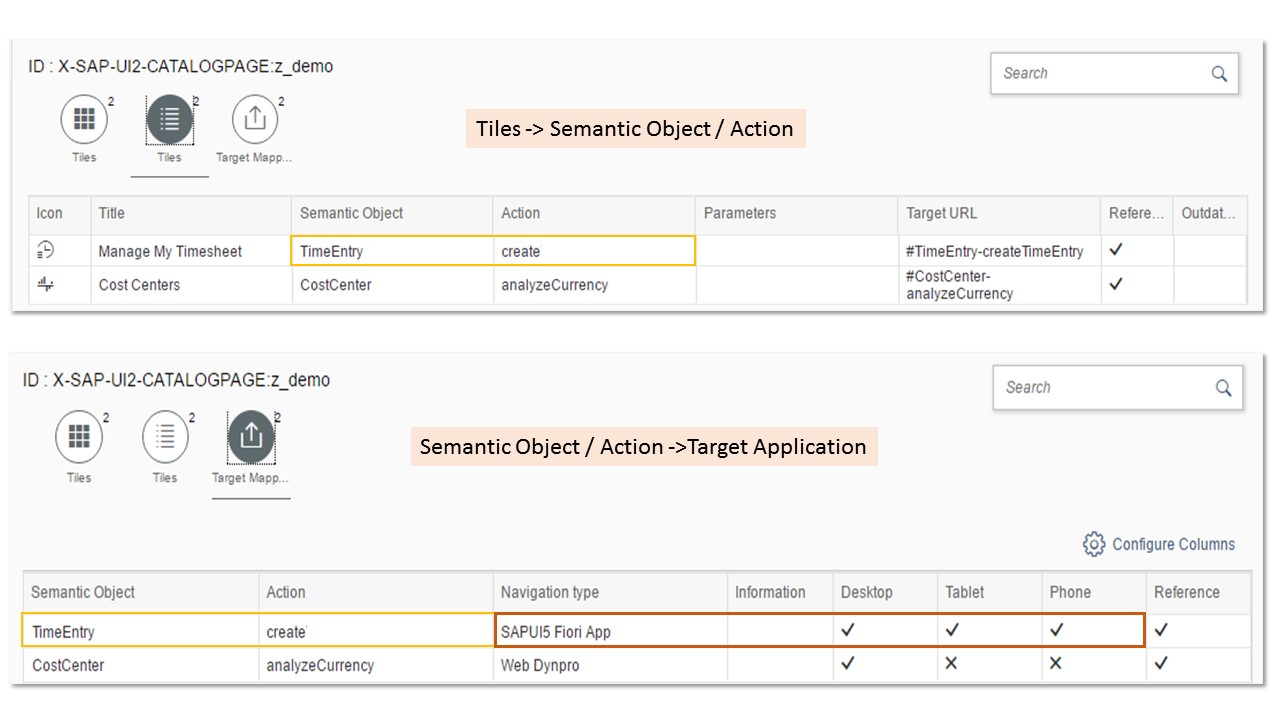 In the following find some examples how to set up the configuration of target mappings for the different application types.

Use Case: When the respective intent is triggered on a desktop device the transaction FTRBP03 in system S4FIN shall be launched. The transaction can be launched with parameters as e.g. BusinessPartner.

Use Case: When the respective intent is triggered on a desktop device, the Web Dynpro application WCM_WDA_WP in system S4EAM shall be launched with several optional parameters for which default values are defined.

Use Case: When the respective intent is triggered the SuccessFactors application to display my goals is launched for company I0300.

Generally it’s recommended to use the target mapping configuration within the SAP Fiori launchpad designer – without LPD_CUST.

It’s not only easier to configure because you have to use only one tool, but it also leads to a better performance during runtime.

SCN Blog: Control visibility of tiles via separation of tiles and target mapping

Do we have to install SAP UI Add-On 2.0 SP01 in addition to Netweaver 7.5 in order to get the simplified target mapping functionality?

In fact it's part of the SAP NetWeaver Stack 7.50. The relevant software component within this stack is the SAP_UI 7.50 component.

Please check the version of the SAP_UI component.

For SAP Netweaver 7.50 no additional Add-On is needed.

Is SAP S/4 HANA required for this new functionality (it appears in the release notes as though it is)?  We do not have HANA at all, but are currently on SAP_UI 7.4 SP 14, and trying to figure out if this functionality would be available to us with an upgrade.

this functionality is availble with SAP Netweaver component SAP_UI 7.50 - also without S/4 HANA.

I have an issue with the Target Mapping Configuration, i am using Designer to try to solve this, maybe you can give us your opinion.

We published the next question;

is it possible to create multiple target mappings for the same semantic object and action?

Is it possible to create multiple target mappings for the same device type and the same semantic object and action?

it's technically possible but then it's undetermined, which target mapping is used.

There should be only one target mapping assigned to the user.

Would be possible to use target mapping (either using new flavor directly entered in Launchpad Designer or old fashioned via LPD_CUST) in order to presesnt different (intranet) URLs (no Fiori / UI5 Applications) depending on whether the user is on Desktop or Mobile? All I read (including this blog) point to the direction that this should be possible, but I cannot make this happen.

I particularly struggle on the "semantic object - action" part. I have created a custom semantic object "MyTimeOffRequest" and (currently try to) reuse an standard action "display". If I'm on the desktop, the URL "https://timeoffrequest.mycompany.com" should open. If I'm on mobile (Tablet or Phone) "mibrowsers://timeoffrequest.mycompany.com" should open (mibrowsers URL schema points to MobileIrons Web@Work browser leveraging app tunneling.)

Is this even possible using the same semantic object - action combination or do I need different actions for desktop and mobile? And in either case, how to set up?

Any push to the right direction would be highly appreciated

you can use the same intent (semantic object/action) for mobile and desktop.

Just maintain two two target mappings with the same intent which differ only in the checkbox for the device 'mobile' and 'desktop' and in the target application.

Thanks Carola, will try this and report back.

Seems be working, thanks again 🙂

Hi Carola and everyone!

your blog post is very clear and helpful.   I am currently playing with my Fiori 2.0 launchpad in an S/4HANA 1610 on premise system and wondering:

Is there a way to launch FioriWave1 apps inside the launchpad ?     So far I tried using Semantic navigation and also URL (as in your post), but they always open in a new browser tab.

Thank you very much for your advice, kind regards,

Not sure if this applies to S/4HANA but there is this Parameter "managed=FioriWave1", see here: https://launchpad.support.sap.com/#/notes/2302199/E. What would be interesting is, if this is also possible when using the simplified target mapping, as this parameter seems to be entered in LPD_CUST, maybe Carola or somebody else can weigh in here.

I tried use the 'managed=FioriWave1' in our Fiori 2.0 installation on ECC, but had no luck getting it to work. Yes, maybe someone knows how to do this and will comment.

it is not possible to use that workaround on SAP_UI5 750 and higher. I will add this information to the KBA.

Dear Jens, Michael and Carola: Thank you very much!

I'm wondering if it is possible to launch a transaction from the Fiori Launchpad with a flavor (defaulted by role) without using LPD_CUST?

There is documentation here detailing how to use LPD_CUST to do what I'm trying to achieve, but I would rather not use LPD_CUST at all given we are on S/4 1610.

I can see you have used the Target Mapping parameter DYNP_OKCODE = /08 to skip the first screen and execute the transaction.

yes, it should work that you just pass the parameters for prefilled values.

Thank you for reply! It still goes to the next screen if I remove the DYNP_OKCODE parameter. I think parameter DYNP_OKCODE with value "/08" is set as default, and that this have to be turned off in a way.

i am trying to create mapping via slipstream engine.

We have SAP 7.50 but i still missing "target value" tab

Anyone know where is the problem?

what do you mean with 'target value' tab?

Could explain more in detail, what you want to achieve?

i am trying to add flavor(with bardcode scanner) from screen personas to fiori lanchpad. For this i need to create Parametrs for flavor and transaction in “target mapping” but i missing column “Target Name” in my previous screen.

we want to create a tile to launch a URL - in our case it's BI Launchpad. However there are different BI Launchpad URLs for Dev, QA and Prod, which we would want to open from the corresponding Dev, QA or Prod Fiori launchpad. The same situation would most likely arise with your Success Factors example. Can you suggest how that could be achieved? I can't see a way to do it with the FLP tile definitions / Target Mappings.

I'm facing the same issue and looking for the best sollution for this.

Did you found a solution for this?

I’ve just discovered that URL-typed target mapping can be used together with a system alias.

You can set the host name in an HTTP typed RFC and provide a relative URL in the launchpad configuration itself. This way you’ll have identical configuration in all systems (dev, QA, prod) and only have to maintain the RFC parameters.

is it possible to open a URL target mapping inside the Launchpad Shell instead of opening a new tab?

I am having the same issue. Installed the SAP Fiori 2.0 and apparently the workaround will not work on SAP_UI5 750 and higher versions.

Did you find a solution?

I suspect that, the information mentioned regarding the workaround in the note : 2302199 is incorrect.Because, we are already on SAP_UI 752 0003 version and it works for us.

Did you already test this (or) you concluded that it will not work based on the information provided in the ticket ? The reason, for asking this is to highlight this misinformation and have concrete answer from SAP.

I have already tested this and it did not work for me/us. We have the 752 0003 version installed as well.

currently it's not possible to open an URL target inplace in the FLP onPremise.

In future with a central entry point on SAP Cloud Platform, it will be possible to launch the various apps inplace (iframe integration). First demo version is to be expected for SAPPHIRE.

I created a SAP incident for this issue and the answer was, that it is not supported to open external resources inside the launchpad. I even tried with a custom app which embeds an iFrame, but unfortunately the site I wanted to display didn't allow to be embedded.

So I'm afraid there is no solution to this problem.

Thank you for the reply.

I cannot imagine that SAP does not have a solution to this problem.

Have we tried passing following parameters in target mapping in case of URL(In order to open an app in same window)?

How to set the parameter for the URL in target mapping ?

Correct answers will be rewarded.

in your screen-shots for Target Mapping (for WDA and Transaction applications), you have parameters with their corresponding target parameters for the application.

But how is it possible, when the Target Mapping is to launch a Tile (so, not for navigation between applications) to get values of Tile parameters to be passed to application as we are in the Launchpad and not yet in the application?

But how in the Launchpad, you are able to get value of parameter BusinessPartner?