When initially setting up a bin location structure it is useful to be aware that whatever structure is created, it can eventually be restructured.

This can help the current setup process, to make it more flexibly meet the current requirements even if it is envisioned that a restructuring will take place in the not too distant future.

It is possible to rename, or even remove, sublevels from bin locations. For example in the following screenshot the range of selected bin locations will all have their zone “Z01” renamed to “Z06” and will have their area sublevel removed from them entirely, resulting in a bin location with only three sublevels of zone, row and shelf. 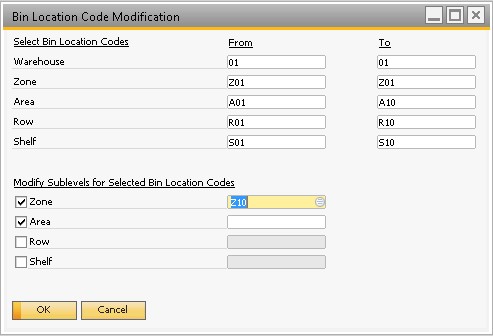 When the merge checkbox above is selected then the color of line 1 will change from red to black and the information in the Error Details column will be removed. The merge can then take place on pressing the Modify button. The merge will automatically generate an inventory transfer document behind the scenes.

All source bin locations are set to “Inactive” after being modified by this process.  (Any Inactive bin location which has no transaction history can then be deleted – either manually or on a batch basis.)