SAP HANA Cloud Platform (HCP) is at the core of SAP’s technology strategy – that much was plain to see for everyone again at SAPPHIRE NOW a few days ago. And while that is little news for the techies around given HCP was left, right and center in all SAP TechEd keynotes last year as well as in THE demo it’s still note-worthy that these days even SAP’s co-founder and chairman of the supervisory board, Prof. Hasso Plattner, spent plenty of time talking about it and exclusively featuring HCP-based demos in his keynote in Orlando! 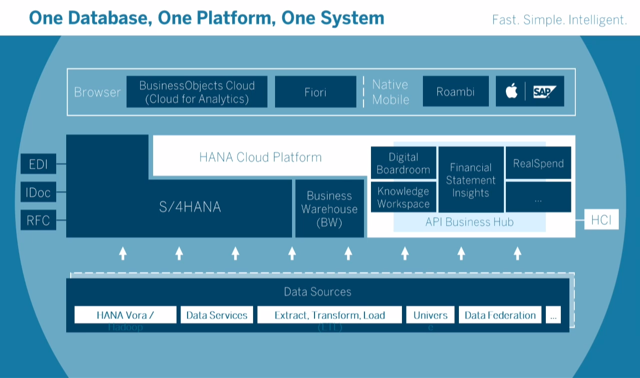 It’s almost four years now since HCP was officially announced as being generally available and even five years since we started talking about it in public (codename: Project River). Looking back at the early days one can truly say that we’ve come a long way – all while remaining true to our original vision of establishing an open cloud platform. Back in the days I wrote a blog post titled ‘The road ahead‘ that sketched out the ambitions of the platform (team), which are still as valid as they were back then… Now, that the HCP has matured over the years it seems appropriate to revisit these posts and once again reflect upon the big picture! 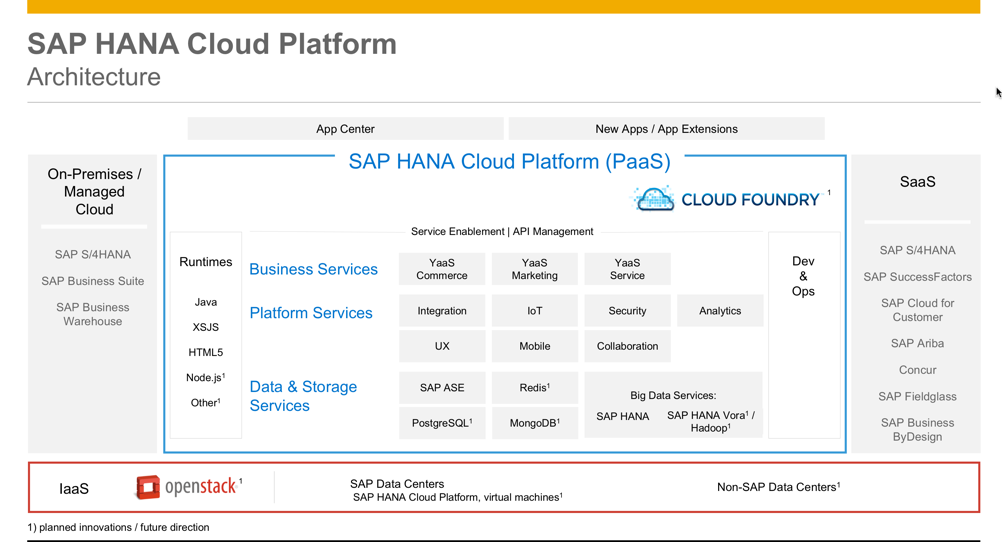 Many of you have probably seen this slide in one form or the other and as such it is well-suited to use it as a baseline to discuss the overall vision and strategy. Starting from the bottom up… let’s talk about Infrastructure (IaaS) first.

Infrastructure-as-a-Service (IaaS) has became a commodity business split up among a few dominant global players such as Amazon, Microsoft, Google and a few others that try to win marketshare by constantly lowering the price points. SAP has no ambitions to compete on that level; frankly said, SAP has never been a pure technology provider and only invests in technology when there’s no prior art and there is a competitive advantage to do so – like SAP HANA for example.

Instead of joining the IaaS price wars (and hereby fighting an uphill battle) it makes much more sense to establish strategic partnerships on that front. As outlined in the marchitecture above, that was one of the main reasons to invest into OpenStack. In order to decouple from concrete infrastructure technologies, an abstraction layer has been introduced that makes it easier to run SAP HANA Cloud Platform on top of various infrastructure offerings. By doing so, HCP can be operated in non-SAP data centers going forward, which will massively accelerate its growth and global footprint. In short, we are enabling HCP for multiple deployment models (public and private cloud) as well as for multicloud usage scenarios! In addition, this will ultimately lead to HCP being co-located with other cloud offerings from customers and partners (more on that later-on!)

Higher up the cloud stack, on the Platform-as-a-Service (PaaS) layer, we also see consolidation across the industry: most of the big players (e.g. Pivotal, IBM, HP, SAP and Atos to name a few) have opted for a common foundation – Cloud Foundry. Others like Microsoft support to run Cloud Foundry on top of their cloud offerings – see Azure support for Cloud Foundry for example. This common foundation ensures interoperability and reduces the risks of vendor lock-in, both of which has been valid concerns from a customer’s perspective.

With this common foundation in place, cloud platform vendors are trying to differentiate based on platform services and capabilities, yet most offer comparable sets of features spanning from storage options (SQL and Non-SQL), to big data and analytical capabilities, to mobile and UX service offerings etc.

SAP is no exception here and since its incubation in 2010 HCP has seen a rapidly growing number of platform services as outlined above (for more details please refer to the HCP capabilities page.) And while SAP’s offering is as broad and deep as the competition, plus given HCP’s unique value proposition of being the only in-memory based enterprise cloud platform in the market – still, the biggest differentiator may even be higher up the stack!

SAP has always been focusing on supporting business processes and for more than 40 years running mission-critical business systems has been its number one priority! That’s our heritage and that’s the mindset SAP is taking into the cloud. All the functionality residing in the broad portfolio of business applications (built or bought) is what separates SAP from the rest. As such, SAP wants to take it to the next level – beyond pure technical capabilities – by offering higher-level business services that can be consumed as micro services/enterprise APIs (see the Rise of Enterprise APIs).

Hybris-as-a-Service (YaaS) has been the frontrunner of this new set of services SAP will be rolling out going forward. By exposing the front-office commercial services (think shopping cart handling, credit card handling and billing services) of the classic hybris solution as microservices in the cloud, these functionalities can be used by others developers within their own applications to accelerate their own development. And that has just been the beginning, imagine SAP doing the same with its entire portfolio of SaaS applications: supply chain collaboration via Ariba, travel management via Concur, staffing contingency workers via Fieldglass, Customer Relationship Management via Cloud for Customers and so on…

In that context, it does not harm, but help SAP’s strategy that there’s consolidation on IaaS and PaaS layers, as that simply makes it easier to consume services from anywhere! Going forward app developers will use APIs from various providers to develop new apps. Thanks to being co-located there’s no latency to consider when consuming external services and thanks to a common platform foundation these services can be run & consumed on various vendor platforms. Hence, it all boils down to offerings enterprise APIs that developers will want to use!

Bringing it all together, the SAP API Business Hub (announced during SAPPHIRE NOW) will play a vital part in this strategy. It will act as the central place to discover and consume business services on a consumption-based API monetization model. The developers among you may want to try out the free BETA version already – if so, please refer to this step-by-step guide to get you started.

All in all, I’d claim that the future is bright indeed for SAP HANA Cloud Platform. Those who have been following the cloud platform topic for some time now will surely agree that it has been an exciting ride so far and the tracks have been set to take it to the next level!

Wrapping it up I’d like to recommend checking-out the recent blog post by my colleague Rui Nogueira who has been covering the latest development in much more detail:

Not only a great Big Picture but also a great retrospective and look forward! We always value how you make it all come together, Matthias!

Too kind Moya - exchanging thoughts with the community is one of the things I truly like about my job! #communityaddict

Thanks for this useful blog Mattias, it highlights the importance of the OpenStack and Cloud Foundry pieces of the puzzle perfectly.

One of my difficulties is that when I drill down on the API piece of the puzzle it seems to get a bit murky.  Whilst pricing for the HCP platform is becoming more transparent it is not clear to me what additional costs I might be committing my customer to if I choose, for example, to use the YaaS business services.

And, to bring up one of my old favourites, I still do not believe SAP are delivering API's for their existing R/3, Business Suite, S/4 customers. 😈 Sure they provide lots of technology to build API's - but they deliver very little out of the box. Those that are delivered come with licensing considerations that tend to make it difficult to know for certain if and when you can use them for your own developments. Why is this important? Because I think the first HCP apps I build will need to integrate with a customer's backend ERP system.

thanks for chiming in and hereby helping to foster the conversation - much appreciated!

As pointed out, YaaS is truly a frontrunner in this context and a role-model for how SAP envisions such business services to work. YaaS pricing is based on consumption (x API calls) - including a free-tier for testing, validation, etc. At the end of a given period (e.g. a month) you get a bill in which every service used is a unique line item. So, pretty similar to what you and others asked for in the SAP Gateway discussion a few years back 😉

Feel free to give it a try via the public BETA: https://www.yaas.io/

Regarding the topic of APIs for on-premise systems... there are many facets to this. An important one is the lesser degree of standardisation across the various installations at customer sites as well as the fact that they are - well - located in the customers' landscapes. When it comes to making these Business APIs (BAPIs) more easily consumable from the outside than SAP Gateway is the right approach. But I believe we both agree that this approach is more catering to the needs for custom development. Given the distributed nature of these backend systems it would require a central API Hub to take over the routing, metering, billing etc.

And that's what we are establishing with the SAP API Business Hub!

However, it's of course much easier to start with public SaaS solutions (that includes S/4 HANA cloud edition) and integrate them first, so that's what's happening right now.

In the interim, one can use SAP HANA Cloud Platform in combination with SAP Gateway (or the respective OData Provisioning Service aka GWaaS provided as part of HCP) to develop solutions that integrate with SAP backends using a consumption-based pricing model for the connectivity.

Thanks mate - all information helps. 😉