Recap – SAP CodeJam in Passau on SAP Gateway and SAPUI5

Last year in May we organized the CodeJam in Cluj (SAP CodeJam in Cluj-Napoca) and learned that there are several types of SAP CodeJam like an exclusive edition. Based on this information we decided that an SAP CodeJam Exclusive Edition is the perfectly fitting event for our company msg-systems and decided to apply for one in summer 2015. Well, it took some time and some emails to get one (it might be that I made it to the blacklist of Craig Cmehil , but then it was worth it 🙂 ). The good news is that finally we got the SAP CodeJam and we brought it to the city of Passau. This was the first time that an SAP CodeJam took place in the city so we can proudly state that the CodeJam family has one more member now.

Based on the development done in our company, a fitting CodeJam topic was the double pack “SAP Gateway & SAPUI5” and we were very pleased that we not only got this topic but also an extremely experienced host for these topics as Chris Whealy would guide through the two-day event.

The first day of our CodeJam started with an overall overview on the two topics so that everybody knew what to expect within the next two days. After that, the rest of the first day was dedicated to OData and SAP Gateway.

Chris gave us a very profound introduction into OData including its history before starting to dig into SAP Gateway. Here the journey started with the regular wizard based way to generate the OData services. Based on the EPM model of the SAP Netweaver every participant succeeded in the creation of the OData services based on the first two how-to guides referenced in the SAP CodeJam blog. (As a side remark for the guys who might also want to offer this CodeJam: we had 40 participants running through the exercises which means that there was quite some traffic on the system … to make a long story short: be sure that the system parameter rdisp/tm_max_no is set to higher value than its default as otherwise some people might not be able to log on to the system 😉 ).

After this standard way of creating an OData service Chris dived deeper into the SAP Gateway area and made us aware of drawbacks that come along with the wizard-based approach and explained how to create an OData service from scratch without using the wizard including implementation and customizing. 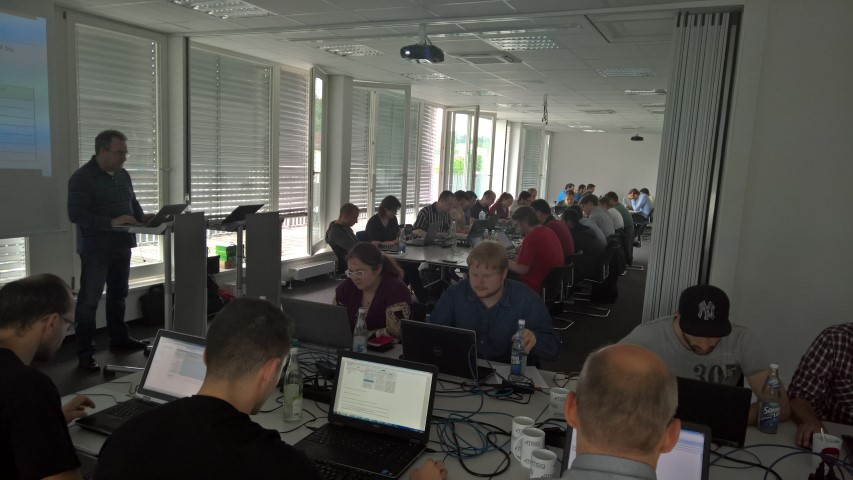 During the whole session, Chris provided us with insight based on his experiences and best practices on the topic which was (and will be) really helpful to us. This was highly appreciated and added value and was far beyond the experience of just walking through the exercises. Chris wanted the concepts to be understood and from my point of view, he really succeeded to achieve that goal.

Unfortunately, the first day was over too fast and it was obvious that there was much more knowledge our host could have taught us.

As usual for a CodeJam nobody had to starve during the first day because food and drinks were provided as you can see: 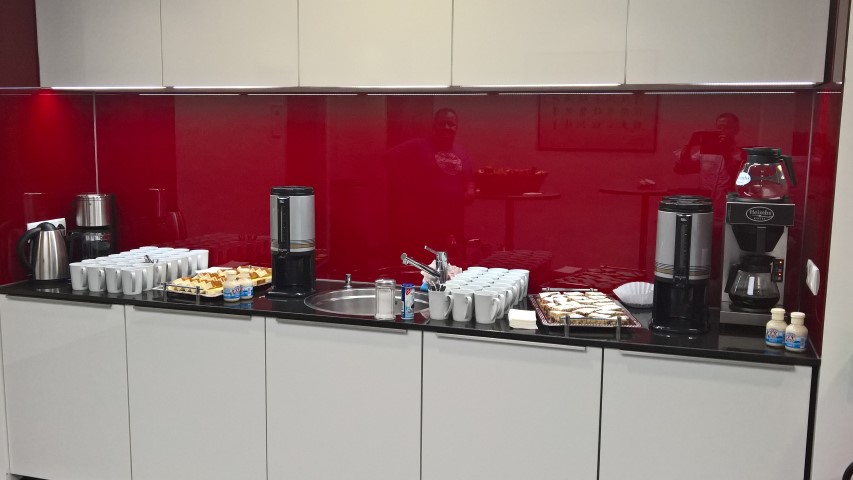 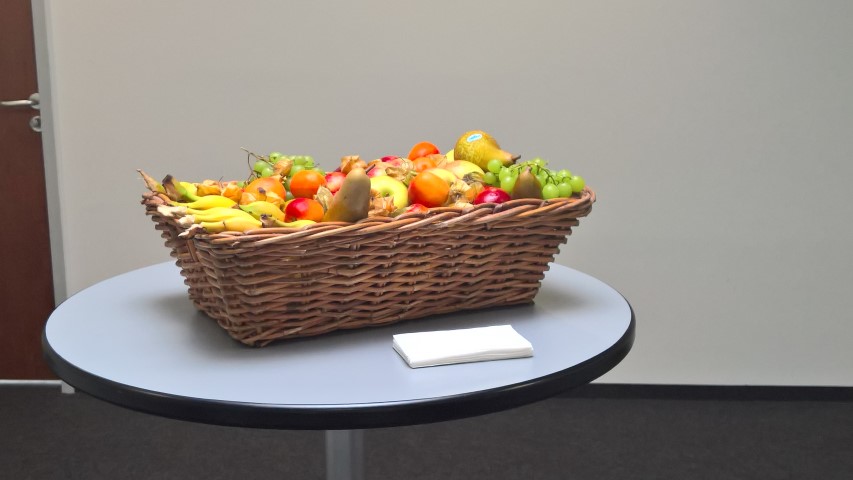 After the first day having an OData Service in place and willing to use it, it was time to create the user interface with SAPUI5.

But first things first, so Chris gave us a crash course on JavaScript Basics. Again the goal was to understand the concepts instead of doing meaningless copy&paste of how to documents which was highly appreciated and was the red line in the training. Understand the concepts and then do the implementation. After the introduction of SAPUI5, Chris guided us through the SAPUI5 walkthrough tutorial by switching between explaining the exercises (and the concepts, sorry for repeating that) and making your hands dirty with coding in the WebIDE of the HCP. For sure not all exercises could be accomplished, but the ones that were done were also understood by the participants. 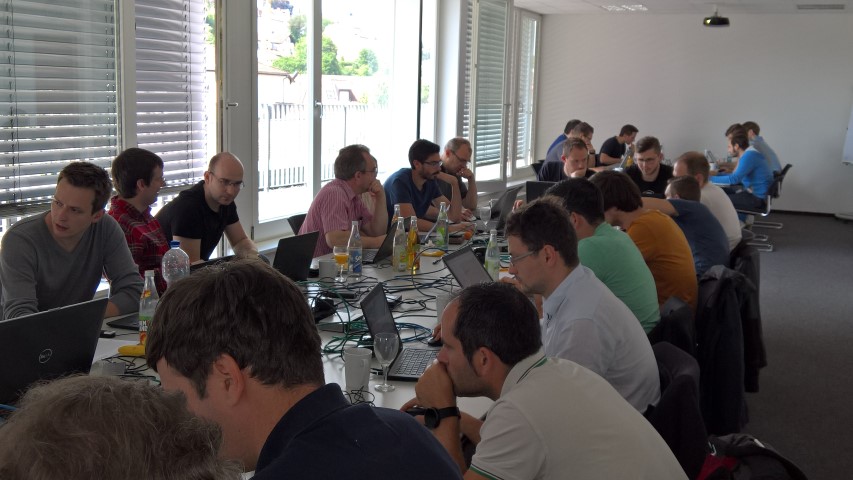 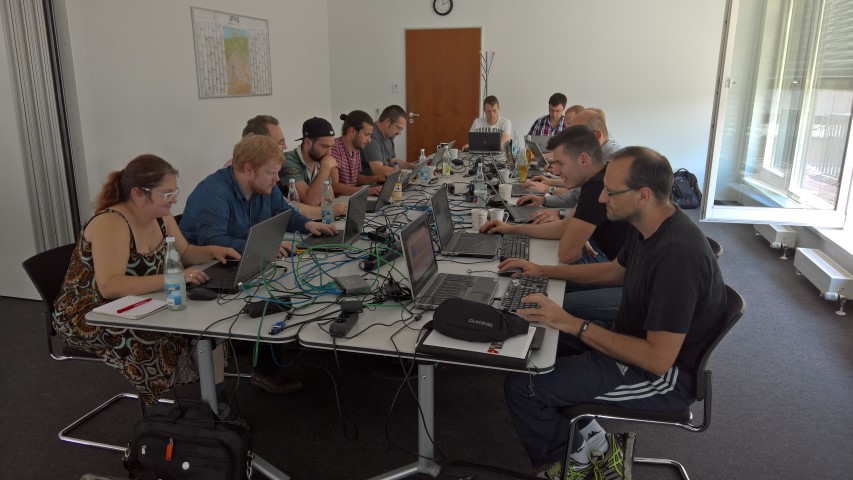 In order to get the connection to the first day, a small app was created using the wizard of the WebIDE consuming the OData service of day one that we exposed using the SAP HANA cloud connector. As this exercise went quite smoothly we still had some time to discuss additional parts of the SAPUI5 tutorial. As usual, this was accompanied by tips&tricks and stories from the “real life” which represented the cherry on the cake of this CodeJam.

Again no worry concerning the physical well-being of the participants: from breakfast to lunch and coffee breaks we were very well served (and could enjoy the beautiful weather during lunch on the terrace of our canteen): 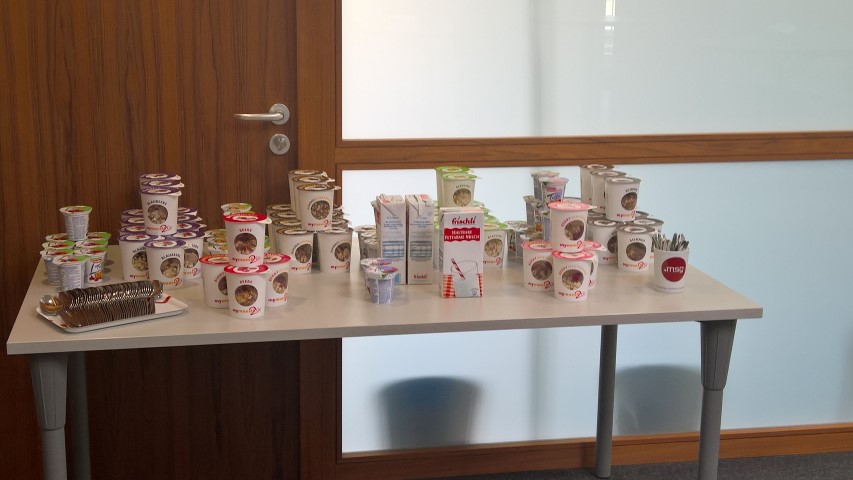 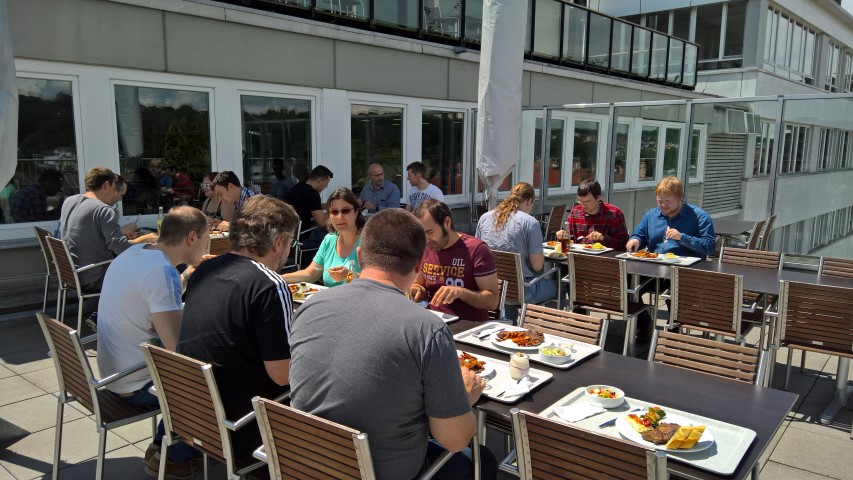 The SAP CodeJams in Passau was simply great, This two-day event gave us lots of insights into the topics SAP Gateway and SAPUI5. Here it is to stress that the training style of Chris is extremely convenient as due to his large experience in real-life projects even experienced developers learned something new. For all the style allowed an understanding of the concepts instead of just doing the code. This will give a stable starting point from which the knowledge can now be deepened.

Even it was a two-day event it was simply not enough time … but even a week would have been too short i. e. Chris could also have filled this week ad-hoc and it wouldn’t have been boring for a second.

So again many thanks to our host Chris Whealy. But also one person must not be forgotten when it comes to the preparation which is Krishna Dalal. She is really  an important and helpful “building block” when preparing such an event.