As a marketer, I love nothing more than being exposed to something that I am generally unfamiliar with, learning the story behind it, and then finding that “hook” to become emotionally involved in the outcome.

When I decided to blog on the upcoming Pride parade, the initial experience was like splash of icy cold water on my face that immediately awakened my senses, delivering a momentary burst of surprise.

As a straight man, I realized simply how little I know about gay history and the overall LGBT struggle towards tolerance and equal rights. Beyond being nothing but supportive of gay rights and of the ongoing progress we’ve seen in my lifetime towards a more tolerant society from my earliest memory, I typically did not spend much time on the topic.

This seemingly complacent attitude may be due to several factors, one of the most significant being that I simply haven’t lived it, in one way or another. There hasn’t been a direct impact on my life that acted like that cold glass of water. Also, living here in the San Francisco Bay Area, maybe I forget to remind myself that the acceptance of alternative lifestyles we enjoy here is not as common elsewhere.

Regardless, this experience of writing a series of blogs in advance of SAP’s presence at the 2016 Pride Parade has been a wonderful catalyst to engage with the core fundamentals principles about which I’m passionate – but through a new lens.

Pride speaks to our basic principles of tolerance, caring for our fellow human beings, and to the rights of every single person to live free of discrimination of any kind, It’s a healthy thing to be more in tune to the very real struggles that still exist towards equality for any group of individuals who still enjoy far fewer rights or freedoms.

Actually, it’s beyond a healthy thing – I’d say that precisely because we are straight, Gay Pride takes on an urgent meaning: 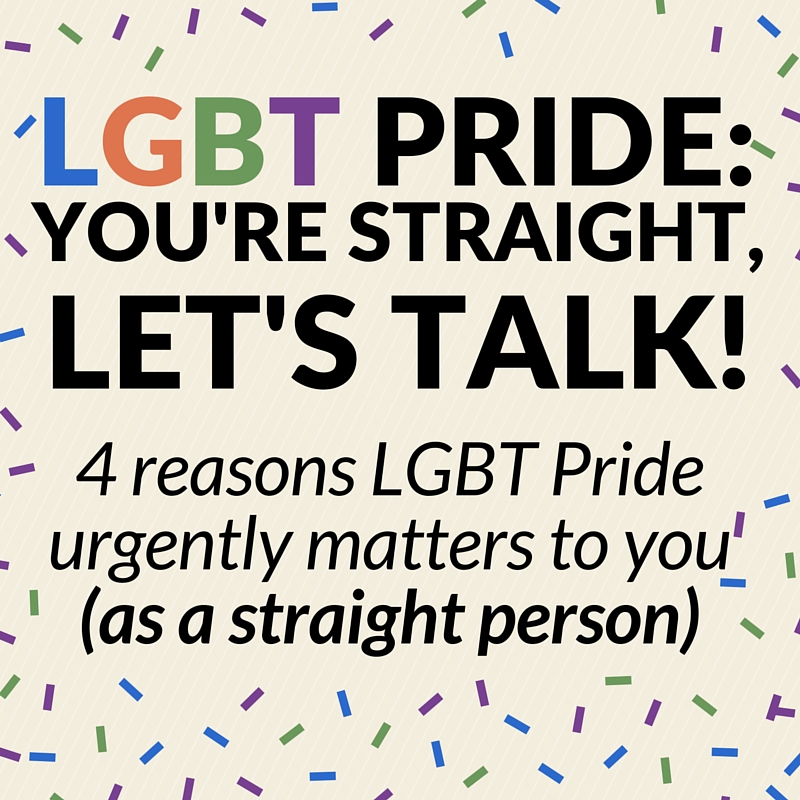 These are all universal issues that simply affect us all.

A last word on urgency: The violent demonstrations in the 1950-60’s that resulted from an anti-gay legal system and lack of assimilation into society have given way to mostly peaceful, celebratory events across the United States and many places around the world. But we cannot take this as a sign that there is not significant progress yet to be made, and a sense of urgency is a healthy way to keep the issues we care about on the front lines, consistently. Violence, injustice and tragedies still occur – make no mistake.

Finally, I have a quick question for you: What do Pride, Cancer and Down Syndrome have in common? Well, read my next blog in mid June to find out!

Until then, please consider celebrating Pride 2016 this year and marching with your SAP colleagues on June 26th for the San Francisco Pride Celebration and Parade – the largest celebration of its kind in the United States.

Boom.  Excellent post.  Very glad you chanced getting that cold water thrown in your face! Cannot wait to see your next connections and posts -- for as much as you're seeing things through new eyes as a straight guy at pride, we get to see it thorugh new eyes through you as well.  Huge gift!

Great post, Rob. I enjoyed getting to know your thoughts and feelings through your perspective on Pride and why marching as a straight person is important. I look forward to your next blog in mid-June. I'm curious to know what Pride, Cancer, and Down Syndrome have in common.

Amazing article, Rob! Thank you for sharing your thoughts and being a great ally.

Really fantastic, thank you for posting, Rob!  This topic is close to my heart, as a straight ally.

Great stuff Rob! My wife, 2 boys and I took part in Pride last year and had a blast! We've usually watched and supported it from the sidelines (i.e. standing on Market St.), but it was a very different experience being a part of it. Sadly, we won't be able to attend this year, but I encourage EVERYONE to attend for all of the reasons you mention and because it's simply fun!

Rob! Everything about this was awesome! Absolutely loved your perspective. I think it's so important to share these insights as a straight ally and encourage everyone to get involved in an initiative that celebrates each and every one of us! Thanks, Rob =)

This is a worth reading blog. Thank you for sharing your thoughts and lift the discussion!

feelings are thoughts are as individual as people's DNA... diversity is the key with freedom to itself without imposing on others....