What do you get when you take a room full of Geniuses & let them loose on an HCP account & box full of Lego Robots?

Early in May SAP UK held it’s first INNOJam event.  Usually these involve teams of customers & partners participating in a coding challenge over two days using SAP products.  This time the challenge was a little different as there was a physical element entitled “Making SAP Real”.  Teams were given the challenge of using robotics and Hana Cloud Platform in an IOT scenario. 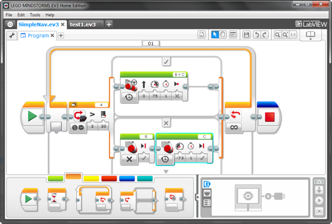 Each team was given a set of the Lego Mindstorms EV3 robotics, an HCP account, two days, plus as much pizza & coffee as they can eat!

If you’ve never come across Lego EV3 before, it’s a set of sensors, motors, actuators & bricks that form round a small Lego computer brick that runs Linux or other OS, and connects via Bluetooth or wifi to a computer, or direct to the internet.  (Sort of like Lego’s own version a Raspberry PI) The brick runs a series of commands either via a set program, or interactively accepting commands from external sources if you’re clever enough to program it.  An example simple EV3 machine can be seen here:  https://www.youtube.com/watch?v=d4k9bWbtJEk

The challenge was to use a combination of software, sensors & physical robotic models to show what an SAP solution does. 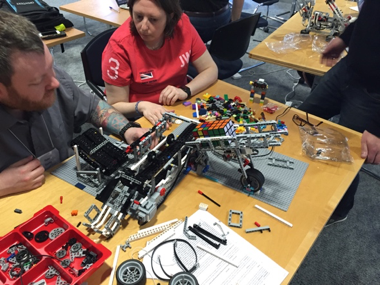 The event took place at the SAP Maidenhead offices where four teams of six were given the challenge and their tools in the morning of day 1.  The event was well supported by our Partner community with representatives from Itelligence, CompriseIT, AgilityWorks, Bluefin and the SAP Mentor community.  In addition we had students from Sheffield Hallam University and a number of customers taking part.

Each team was given an SAP facilitator to help with the challenge, very quickly different solutions for solving the problem were adopted by each team.  Some teams took a technology first approach, connecting the Lego EV3 up to their computers then establishing a link with HCP.  By mid afternoon of the first day one team had Hana Cloud Platform receiving readings off the Lego motion sensors and had managed to establish two-way communication by getting HCP to command Lego to do things from the cloud.

This was a big step as traditional IOT scenarios largely involve one-way traffic of sensor readings going up to the cloud but not back again.  This was helped in a big way from the sample .Net code supplied by SAP’s own resident expert Laurent Devroede who’s team had done much of the technical pre-work for the event.

Two of the remaining teams had taken a more design based approach and spent the first half of day1 establishing what the business case was they were solving and how the process would work. Team 1 took an entirely different approach and started building Lego almost immediately, in what turned out to be the most impressive physical model of all the teams. It was this team that kept me busiest with a constant demand for new varied materials & equipment !

The Sap Mentors and our own resident University professor (that had accompanied the SHU students) played a valuable role in steering the thoughts of their teams when the technology challenge got tough.

Mid-evening of Day1 we broke for Pizza and the teams worked into the evening until about 10:00pm.  Day2 saw the solutions taking shape,  team1 solution was based around a quality control solution for ordering Rubik cubes.  Team3 was producing a security solution based on Lego robotics which scanned badges for access control.  Team2 was making a production line sorting machine named the “Prawn Pusher” after one of the team members who worked for a frozen seafood company. 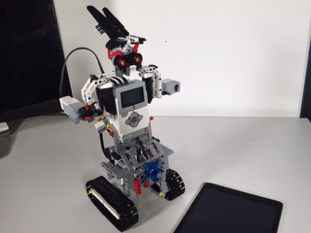 Team4 had initially been ahead on the day1 being the ones who were first to establish the Lego to HCP connection. However as the first coffee of day1 reached the bottom of the cup team4 still didn’t have a firm idea on what their solution was doing. At this point I couldn’t help wondering if a quick Design Thinking session the day before would have paid dividends!  However a quick pep talk from the team’s SAP Mentor got them back on track and they decided on an HCP powered postal delivery system.

By the afternoon of day 2 all the systems had taken shape nicely and we had four working Lego EV3 systems being powered by Hana Cloud Platform.  All teams presented their solutions back to the group and the SAP staff helped judge the winner. 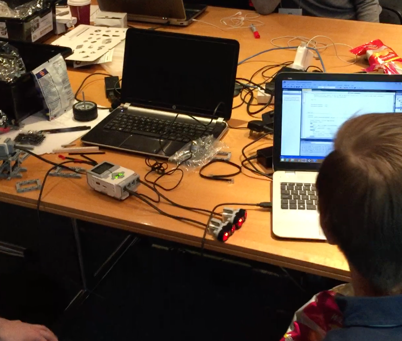 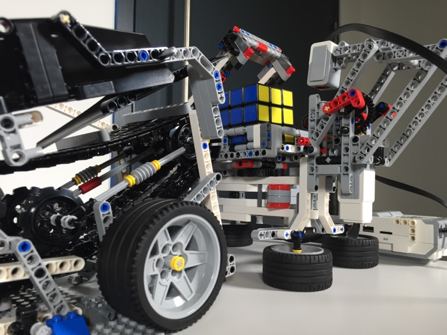 The solutions were as follows:

Rubiks cube fulfillment line: An HCP screen takes the order for ‘x’ rubik cubes, the system checks if they are solved or not and delivers the completed ones to goods out. The unsolved ones are then placed into a cube-solver which scans & fixes the cubes before delivery. Verdict:  A great concept let down only by lack of time. The cube solver worked well but the production line element wasn’t completed in time.

“Prawn Pusher” Quality control line: A nice concept that was in contention to win from the outset. The concept came from one of the team members who worked for a frozen seafood company,  A hopper of ‘prawns’ (read Lego bricks) was fed onto a conveyer belt which graded their quality based on colour. The decision to grade the prawn was made by HCP rules and then reported on the HCP dashboard.  Verdict:  A great system that showed definite promise on the day.

Security Robot:  A robot scans your badge and lets you pass or not depending on your access privileges.  Verdict: The system worked well but the judges felt a little more interaction was needed

Postal Delivery Service:  The team started off with the fact that nearly half of all rural post boxes are empty every time a postal worker checks them for collection!  The Lego model consisted of a Postbox which sensed when a letter had been posted, An HCP application then monitored this & other postboxes to show a driver a map of which boxes needed emptying.  Once collected the system monitored loading bays at the depot, the entry barrier was HCP controlled and only let in a post van if there was a delivery bay free.  Verdict: A well thought out solution which all judges agreed had potential for practical use in the real world.

Which team won?  It was close but team 4’s Postal Delivery Service scored the most points against the original challenge criteria.  We were amazed at how much all four teams had progressed over the two days with four working HCP Lego systems.  Feedback from all participating was very positive and it served to bring together our developer community with our partners and University Alliances working together as teams.

Whilst spending two days playing with Lego Mindstorms is a great fun, this exercise has a more serious side to it.  If you are an organization looking to embark on an IOT journey but worried about how hard or complex it will be, then our INNOJam proves that from a standing start you can take Hana Cloud Platform and produce a working prototype quickly and in an agile way.  If you are interested in using HCP then a free trial account can be found here:  Cloud Cockpit 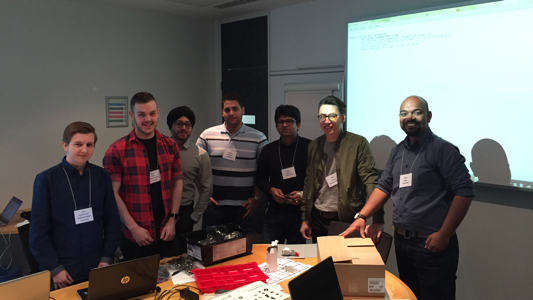