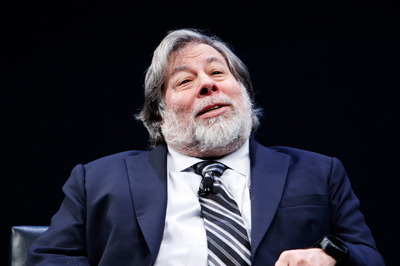 He may call himself a lifelong outsider, but Steve Wozniak, the iconic co-founder of Apple, holds some mainstream ideals like the value of using computers for social good, collaboration and plain old fun. Alternating between sly humor and genuine earnestness, Wozniak delighted a packed crowd during his recent keynote at the annual SAPPHIRE NOW + ASUG Conference in Orlando, Florida, telling stories about everything from his early career and love of pranks, to his recent experience buying a Tesla. Wozniak said his two biggest sources of inspiration throughout his life have been his father and his fifth grade teacher.

“I’ve always had two overlapping interests – engineering and teaching. When I was in fifth grade, I told my dad I wanted to be an electrical engineer like you but second I’m going to be a teacher,” he said. “I was a technologist right out of high school. But I always cared about education, and the application of any products we built. I was inspired by the social good that if we had more computers we’d be able to communicate immediately.”

Wozniak never leaves the house without his Gameboy, was amazed at Siri’s ability to correctly answer random questions before Apple bought the app, and counts leaving HP one of the toughest decisions he ever made. “I wanted to be an engineer at HP for my entire career. Then a friend convinced me I can start a company as an engineer and stay an engineer.”

Most everyone knows how Hewlett-Packard (HP) turned Wozniak’s idea to build a PC down five times. However, he also wanted to set the record straight about the genesis of Apple.“Don’t believe that movie you saw about Steve Jobs coming into town, and taking me down to a computer club. I was so well-known there that I helped other people build their own computers. I took Steve to the club.”

Wozniak demurred at being called a genius, remarking with typical humor that, “I’m only a genius now at making people think I am.” Nevertheless, as a sixth-grader Wozniak built a radio transmitter, followed by a Tic-Tac-Toe playing computer made of transistors. In graduate school, Wozniak said he usually completed reading half of his course textbooks the week before classes began.

On the recently announced partnership between SAP and Apple, Wozniak had nothing but praise. “SAP software applications have to be tailored towards certain devices, and I’m so glad to hear about the Apple partnership because SAP is my favorite database company.”

When it comes to artificial intelligence, Wozniak preferred to use the term “simulated intelligence.” His reasoning is that information originates with humans, making it not quite real. “Machines don’t come up with ideas – this is what I should do to solve problems,” he said. “We’re not at that stage and I don’t know if we’re really going to get there before long. If we don’t equal the structure of brain processing, we aren’t going to have artificial intelligence in machines involved in having conflicts, enemies, friends, partnerships, or out-thinking us. Machines will be working to solve problems that we’ve defined and helping us for a long, long time. They’re going to be our helpful friends.”

Wozniak, who taught for eight years, envisions an educational system that revolves around one-on-one teacher-student relationships. His theory is that artificial intelligence could get smart enough to be the teacher.  “We’re already in love with our smartphones. We could replace teachers with computers. We already have all curriculums online, and people are super-independent. What if I had a teacher who was a computer and it’s my best friend?” he said.

A self-described prankster, Wozniak recounted numerous pranks he’s played on colleagues, friends and family members over the years, including rigging his car horn to honk in the garage while he was traveling miles away, and getting other people to take the blame for jokes gone awry. “Every new thing has angles to it that can be used for pranks, and thankfully I have a wife that loves it.”

As for his long-awaited Tesla, Wozniak credits his wife’s insistence with their decision to finally buy the electric vehicle. Initially reluctant, he walked away from his first chance to purchase after six months on the waiting list. He jumped on the new technology after later design iterations addressed his concerns. “My wife said several month later ‘if you want a Tesla you can order it.’ Thirty minutes later we had one.”