To write the first blog took me some time though there are few topics in my mind which I think I should blog. To write a blog with the right contents and presenting in a way which is very helpful for others is a challenge and hats off to al the bloggers for their efforts. I have been a constant follower of scn blogs and many such blogs has helped me a lot. So this is my first humble attempt to share something which I feel would help anyone who come across similar issue.

Customer was having  a custom domain of data type dec length  16 and decimal 9 .Based on the various documentations on packed number our assumption was that we have created a packed number with maximum length possible which is length 16 . 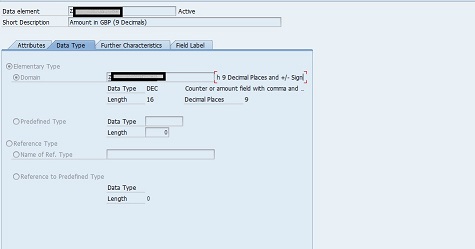 Below is how it appeared in the debugger .

What I understand is  though I have declared my domain is of length 16 and dec 9 ,internally system converts into a packed decimal of length 9 and

dec 9 .P(9) DECIMAL 9.Now I had to understand what’s this length stands for ,what does it mean by length 9  in case of packed decimal.

Based on  definitions about packed decimal length 9 means 9 bytes and  2 digits forms 1 byte and so the actual length is 18 digits which includes one space for +/- sign. So in this case a domain  declared with the  length 16 and decimal 9 is converted by the system as a packed decimal of length 9 and decimal 9 which means a total of 18 digits including 9 decimal and 8 digits before the decimal and one space for the sign . Now I understood the reason why the amount 100000000.00 was not accepted by the variable ,instead 10000000.00 was accepted .

Below is the test program to understand more about packed decimals.

CHECK lv_p is NOT INITIAL.

write:/ ‘Keeping Decimal place constant as 9 in the situation’.

CHECK lv_p2 is NOT INITIAL.

CHECK lv_p1 is NOT INITIAL.

If we have to keep the length fixed for the  domain( declared length 16 decimal 9 ) , reduce the decimal points to hold more digits before the decimal .Below is a screenshot to show when the overflow will occur for the used domain reducing the decimal is reduced to 3 digits. Below is the output from the above code . This shows 14 Numbers are possible before decimal and 3 numbers after decimal. 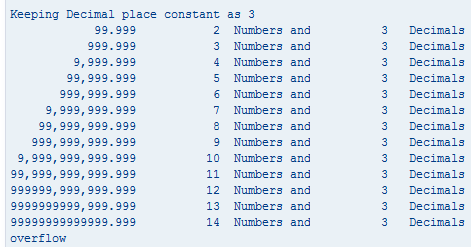 So to understand maximum value possible, I have increased the local packed decimal variable to 16 and was able to see maximum number possible keeping decimals as 9 was huge number – in the help documentation – a formula is provided as well. For easy understanding below screen shot is given. 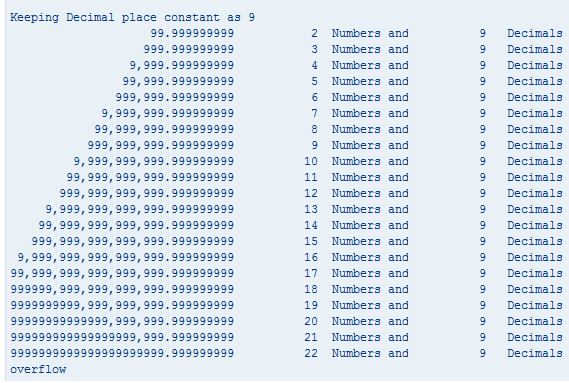 Hope this blog was useful.

You can also read more about predefined numeric type in in help.sap.com

What I like about this blog is that it is

a) From a personal view point and

Based on  definitions about packed decimal length 9 means 9 bytes and  2 digits forms 1 byte and so the actual length is 18 digits which includes one space for +/- sign.

What I understand is  though I have declared my domain is of length 16 and dec 9 ,internally system converts into a packed decimal of length 9 and dec 9 .P(9) DECIMAL 9.

Thanks for your valuable feedback.I will update my blog accordingly.

Good work, Neeta! The blog post solves a problem, is illustrated with screenshots and has the detailed code to help consultants.

Now, we have one blog with person exp which we can refer to when we need.

But,did you find any explaination on what basis SAP considers the packed decimals

In the below example :-

Can hold a max of 16 characters (including dot with 2 values after that, for saving in Database)

Output length 21 is to accomodate the comma separators and +/- at the level of table display.

Can hold a max of 13 characters (including dot with 2 values after that, for saving in Database)

Output length 16 is to accomodate the comma separators  and +/- the level of table display.

useful blog . Thank you so much

A packed byte is packed byte coded decimal (aka packed BCD) , in 1 byte, half byte i.e. 4 bit is enough to encode 1 decimal digit. Thus each packed byte can be used to encode two numbers ( though depending upon CPU word size it can have more than two digits in 1 word )

In ABAP P data type is packed byte with total number of packed byte as n and Decimal digits .  i.e. so it would mean 2n digits. Last packed byte uses 1 byte for number and other for sign, Thus you get 2n-1 digits to encode a number. Out of those 2n-1 digits, d digits are reserved for decimal places so remaining ( 2n - 1 - d ) are used for integer part .  In ABAP d <=14 and of course  n >= d.

Since you used 16 length in your domain which is a even number of places so it will need 16/2  packed byte and 1 more for sign i.e. total of 8 + 1 = 9 packed bytes (thus half byte wasted for each so an odd number length should be used while using DEC ).

Thus in your case it was DEC length 16 decimal 9 would have corresponding packed representation as  P Length 9 Decimal 9. which gives you 17 - 9 = 8 before and 9 places after decimal.