We often get used to following a regular status quo approach to meeting business requirements for SAP data creation and/or migration. This is because there is a certain path defined at a client site and we do not want to risk thinking of alternative approach, since this may cause a change and thus introduce a risk.

However, I do find that analyzing a little bit in the design phase for any quicker, cheaper and less complex alternatives to SAP data creation will bring in a great benefit and avoid risk on the contrary. I will illustrate that with a seemingly simple example but as they say common sense is not so common.

Over last 8 weeks or so, I have been responsible at the client site to create Sales Deals using an ABAP upload program which was already developed some years back to help the business teams to create their own data using spreadsheet as their source file. This file hence included the Condition record details like validity dates, condition type, customer sold-to or the bill-to information etc. So I had to use this ABAP utility to produce the load file in the format it expected with all the above information and then push it to the ABAP program to create the corresponding Sales Deal with the condition record details in it. The load file format looked something like this.

We had created a fairly large volume for one specific country roll-out and then the business team came back after the go-live and asked our help to re-create the Sales Deals with different validity dates. In the meanwhile, during this post go-live period, they had manually updated some of the prices sporadically. So the previous load files were now rendered useless.

The traditional approach for me was to download the Sales Deal and its conditions record details and then re-shape/re-transform to the ABAP upload utility format. This involved a data transformation of a 2 day effort at least.

After spending some time understanding the requirement, I started to play around on the VB21 transaction code for Sales Deal and noticed a copy from reference process(most of the people might be familiar with Material Master or Vendor Master copy from reference). See the snapshot below. 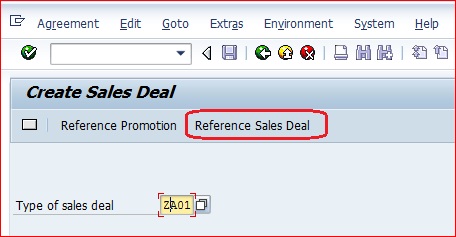 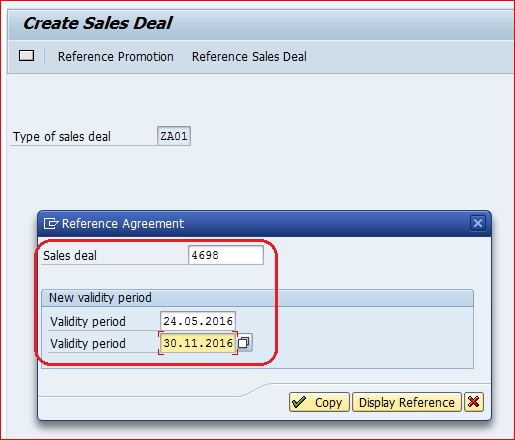 This may seem straightforward at the hindsight but when you are in a status quo for a process, you do not spend time thinking out of the box and sometimes it gives great value and satisfaction!