Ready to roll for 3,000 miles and a much greater good halfway around the world 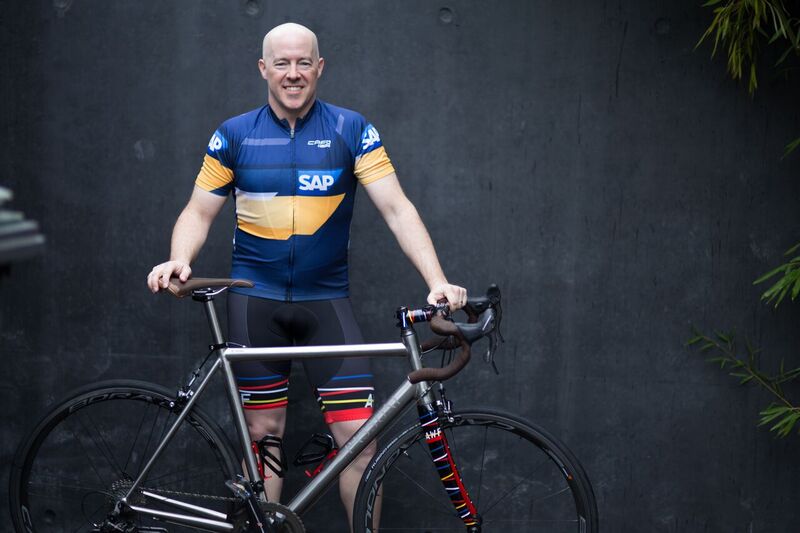 Mark your calendars. On Saturday, June 18 at 8:00am, when you are sipping a warm morning beverage, looking at that To Do list, or maybe just throwing off the covers, Marc Micek, senior director, Strategic Ecosystem for SAP North America, will be setting out on a seven-day, coast-to-coast bike race and, alongside his seven friends, testing the outer limits of his physical and mental stamina. All in aid of a population he says deserves far greater ‘endurance’ accolades than he or any of his teammates could ever hope to receive.

An athlete for most of his life, when Marc’s body started to say ‘Yeah, no,’ he shifted from the physically punishing team sports he played in his teens and 20s to endurance-based solo pursuits, such as distance running, in his 30s. However, marathons “got boring,” so he turned to triathlons. Newborns in 2007 and 2008 put a dent in the swim/run/bike training schedule, but he kept running regularly and simply included a running stroller.

When the siren song of endurance athletics was too loud, a documentary about Race Across America (RAAM) got Marc thinking of assembling a team, enough to reach out to a colleague from business school who was also an endurance athlete. After 3 or 4 years, the idea seed finally took root when the same colleague retired, decided to do RAAM and asked Marc if he was in. He was, and so were six other colleagues from Europe and the U.S.

Considered the world’s toughest bicycle race for amateur or professional athletes, RAAM challenges long-distance cyclists to test their endurance – without stopping until the finish line – across 3,000 miles or roughly 4,800 kilometers. (Unlike the Tour de France and Giro d’Italia, which are ‘stage’ races.) Though many have competed, only 2,500 cyclists have completed RAAM since its founding 35 years ago, a feat that makes one a ‘RAAM Finisher.’ In that time, the race has become a platform for participants to raise money and awareness for charities of their choice.

This is where Marc’s story ramps up a notch or 10: He and his colleague recently co-founded Athletes Without Frontiers (AWF), a charitable foundation that aims to connect endurance athletes from around the globe with a select set of charities whose mission is to increase social empowerment of the underprivileged through health, education or job growth initiatives.

Making RAAM their inaugural event, AWF is raising funds for WISER International, a non-profit (and AWF’s inaugural charitable partner) that built and maintains a private school for girls in Muhuru Bay, a deeply impoverished area in the southwest of Kenya.

Here’s another big notch: AWF’s goal is to raise $1M for WISER in the next 300 days. 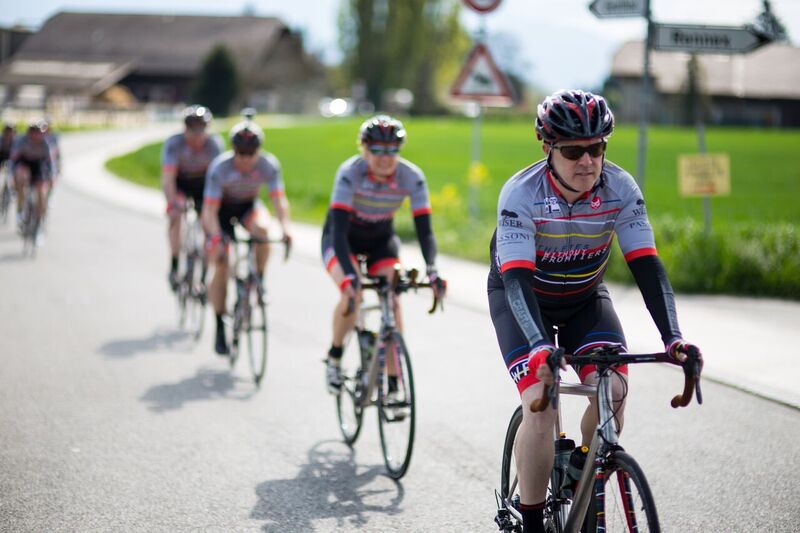 And here’s the reason why. Girls in the area, Marc explains, are extremely vulnerable to many cultural and economic forces that not only rob them of individual agency, but resign them to lives in a lower social position where their contributions and potential are devalued if ever considered.

WISER International’s school works to change by providing the students with a good education, regular access to qualified medical professionals, consistent and nutritious meals, clean drinking water and even essentials such as feminine sanitary products — the basics of a life lived with dignity and hope, let alone for that of a woman. “The conditions in which they live are incredibly sad and difficult; they are superstars of endurance,” says Marc.

The school in Kenya strikes close to home. “I have a seven-year-old daughter and to think of what they, at the same age, on the other side of the world have to endure makes this a deeply emotional and compelling journey for me.”

Setting out from Oceanside, California on Saturday, June 18 at 8:00am, the AWF team’s goal is to roll into Annapolis, Maryland by 8:00pm seven days later on Friday, June 24. Over the week, each sub-team – four members who are on an eight-hour ‘cycle’ shift while the others are on a ‘rest’ shift in the RV support vehicle – will ‘relay’ across the miles. One rider will cycle for anywhere from fifteen to thirty minutes depending on the terrain and scheduling, while the next rider is up ahead in another support vehicle, at the ready, waiting to ‘cross wheels’ on the road and signify an official relay.

Training for the grueling event, each team member is expected to log 12-15 hours a week in the saddle with maximum effort for most of it. Doing so, Marc notes, builds not only the physical and muscle stamina the riders need, but the mental endurance to sustain a pace of 19 miles per hour needed to reach their goal. 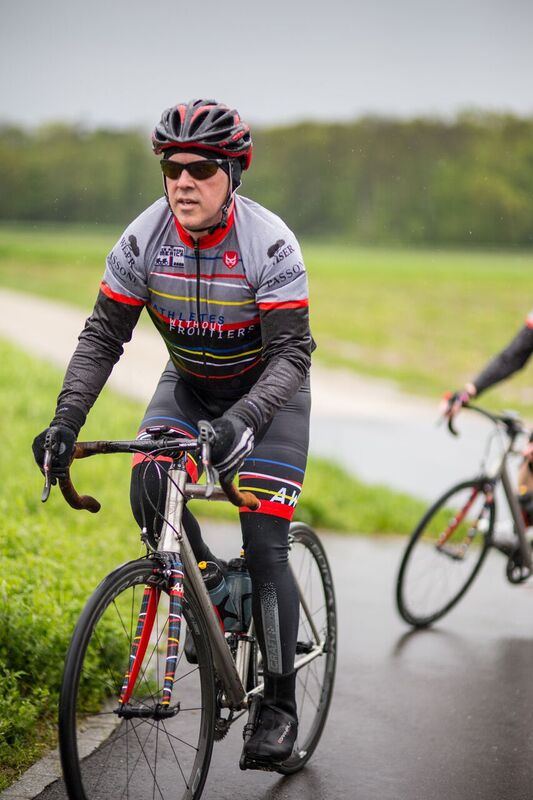 On first blush that speed may not seem arduous. But consider any team rider must maintain that pace which requires near-maximum effort, day or night, across 13 states, 3 mountain ranges, 2 deserts, and in all kinds of weather – for seven days. (At this time, dear reader, I hope 19/mph humbles you.)

Two areas loom large. California’s desert, mere hours after the start, offers a long slow climb to 4,300 feet and a miles-long 3,000 feet dramatic descent in what’s known as the ‘Glass Elevator.’ Shall we note the temperature swing from roughly 60F/15C to over 100F/37C in a span of 25 miles? The Appalachian Mountains through Virginia and Pennsylvania are short steep climbs and come at the end of the race when riders have nearly depleted their reserves of strength and endurance in the face of fatigue and a mix of frayed nerves and adrenaline.

On the road, a nutritionist will make sure Marc and his teammates have the right balance of protein and carbohydrates to fuel the daily 5000-calorie burn, and most importantly, proper hydration to carry them through the race. “There will be a lot of peanut butter and jelly sandwiches,” Marc notes. He laughs adding that by day six or seven, a burger joint won’t go awry. “You hope no one’s hands are near your burger because they’ll lose them.”

Any sinking feelings about the terrain, race, or mental and physical anguish are countered by thoughts of rolling over the Annapolis finish line, and the friendships that will last for years to come.

Above all that, however, is the drive to serve a greater good. By participating in RAAM, not only is AWF riding to support WISER International, they have a bigger objective. They are looking to raise funds, support and awareness to ultimately build an AWF endowment they can leverage and invest in charitable organizations that fit their focus of health, education and job growth.

So on that Saturday in June, once the bed is made and you are moving into your weekend, and before you finish that warm beverage, raise a mug to Marc and the AWF team and remember: 3,000 miles, 19/mph, 7 days, 3 mountain ranges and 2 deserts.

Good luck, Marc. Shiny side up.

To learn more about Marc and the AWF team’s fundraising goals, and to track their progress, visit www.athleteswithoutfrontiers.org and www.raceacrossamerica.org.