How Robotics Could Create a More Human Workplace 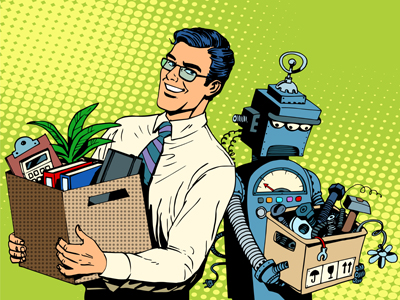 Fear sells. That’s the idea behind scary headlines about the coming invasion of robo-bosses replacing human managers with evil algorithms intent on workplace domination. While these predictions aren’t causing widespread panic in the streets (yet), they are making some folks uneasy, and that’s a good conversation starter. To explore the robotics phenomenon further, I talked with my colleague, Steve Hunt, Vice President of Customer Value at SAP SuccessFactors.

Hunt argues that digitization is likely to actually create a more human workplace, provided it’s applied correctly. Success hinges on matching machines and people to the jobs they are innately suited to perform, as well as rethinking workforce management strategies. Most machines are built to do things people are not good at doing, do not want to do, or are unable to do.  For example, performing repetitive, dangerous or physically demanding tasks or tasks that require processing large amounts of information.

The hardest machines to create are ones that do the things that make people uniquely human.  For example, machines aren’t good at things like building relationships with other people, anticipating and responding to people’s emotional needs, processing natural language, responding effectively to unforeseen and novel problems, or coming up with creative solutions and innovative ideas. We don’t expect machines to act like people, and machines, for the most part, aren’t good at acting human. This is why we are so surprised when someone gets a machine to act like a person.  But invariably we find this somewhat creepy because even the most human-like machines still don’t feel truly human.

Where we get into trouble is when we start to expect people to act like machines.  Hunt thinks that we shouldn’t measure people the way we measure machines. Machine measurement tends to focus on how accurately specific tasks and activities are carried out. It’s rooted in meeting pre-defined standards and tends to stress repetition and following rules. But the things we associate with the highest level of human performance aren’t usually about “just doing what you are told.” Companies get in trouble when they adopt this sort of mindset.  For example, in a study recently published by the Journal of Applied Psychology, researchers found companies tend not to recognize and reward people who go the extra mile to help others and respond to requests — despite having a massive impact on organizational productivity. Companies typically focus on tangible, immediate outcomes that measure the kind of output a machine would produce. As a result, employees who are displaying the most human of characteristics, social helping behavior that contributes to the greater good of the organization, aren’t recognized.

“We need people to evaluate the performance of people,” said Hunt. “A machine can tell you whether or not you’ve completed specific tasks, but it does not appreciate if the reason you didn’t make your numbers that quarter was because you were helping colleagues get their jobs done, and that your altruism actually led to more positive overall outcome for the company. Nor can machines accurately measure the kinds of value people provide when their job involves customer service or other tasks that are about working with other people. Yes, you can measure the exact angle at which the server put the dinner plates on the table, but machines aren’t capable of accommodating a diner who has a broken arm, or has moved the water to the other side of the table.”

The attributes and capabilities that make people most valuable are uniquely human. There are often mechanistic aspects to certain jobs, but if we find the best way to measure performance in a job is to treat someone as though they were a robot then frankly, we shouldn’t have people performing that job.

“As machines are used more and more widely at work, increasingly the reason we’re going to employ people is because we want them to do the things machines can’t do well, which is not mindless, repetitive tasks,” said Hunt. “Digitalization, if applied correctly, is about creating workplaces that allow people to focus on the things that people are naturally good at.  For example, compared to even the most advanced machines, humans excel at making emotional connections, scanning environments and recognizing patterns and adapting their behavior in the moment to anomalies. It’s also incredibly difficult for machines to understand language because we don’t just listen to the words, we understand the context. We need to have humans performing jobs that require those kinds of tasks and measure them accordingly.”

Technology may play a role in monitoring performance, but ultimately only humans can accurately evaluate the performance of other humans.  “Technology makes it easy to get information so managers can have a conversation about performance,” said Hunt. “But you don’t use the technology to have that conversation. You use the technology to collect the information that allows people do what only people can do – have a constructive dialogue around someone’s contribution and how the company treats them.”

We know it’s ludicrous to criticize a robot for lacking empathy or creativity. Now if we can just reward people for doing what they do best, the digitized workplace will be a place we’ll run towards and not away from.