We recently faced this issue with JMS receiver communication channels which are frequently throwing error in case of network, connectivity issues or when MQ queue manager is restarted.we have implemented custom solution to  fix this re-connecting issues in SAP PI.

In general MQ Queue Manager which would break all the connections that are idle for more than 10 minutes interval. JMS receiver channels unable to reconnect to WebSphere – MQ queue manager and every time we need to manually restart the communication channels in case of this issue.

JMS channel fails to connect to MQ whenever any network problem occurs. This generates the following error

The main reason for this issue is that Queue Manager which would break all the connections that are idle for more than 10 minutes interval and whenever a network problem occurs the PI JMS channel goes down.

This problem is caused due to a limitation in all versions of Websphere MQ including 6.x that has been acknowledged by IBM. Websphere MQ diverges from the JMS specification and other JMS products in its behavior of notifying the JMS connection exception listener. (javax.jms.ExceptionListener).

However, when a MessageListener (asynchronous) is created on a Session object associated with a JMS Connection, WSMQ informs the connection’s ExceptionListener immediately.At present there are no permanent solutions to this problem,only workarounds are available.

The DEPRECATED workaround involved creating a new session and a dummy javax.jms.QueueReceiver and dummy javax.jms.MessageListener on the connection object. This forces MQ to invoke the connection’s exception listener. Since this solution entails a higher resource cost, it can be activated only by an explicit additional JMS parameter specific in the channel configuration.

This workaround was previously available by setting the additional JMS parameter WSMQ.ForceConnectionExceptionHandling = true in the JMS receiver communication channel.

However, analysis and feedback from customers revealed that this solution suffers from SEVERE performance issues due to the underlying behavior of the WebSphere MQ provider, and hence is NOT RECOMMENDED for moderate-to-heavy use – when large number of messages sent on a JMS receiver communication channel. Hence, this solution is now DEPRECATED and WITHDRAWN.

For example, instead an error is thrown when the first message is sent from XI to the queue through the invalid JMS connection object.

An alternative solution will be available only from XI 30 SP20, XI 70 SP12. The new solution sets up a poll job that regularly polls the JMS connection in order to determine whether the connection is valid or invalid. The poll job sends non-persistent messages with a small expiry period to a temporary queue available on that connection. The connection is determined as broken when message-send to the temporary queue fails. The poll job runs every 90 seconds is activated by the means of an additional parameter in the JMS channel configuration. The resource cost of this poll job is a new TCP socket connection between client and server (behavior of MQ provider).

ABAP report ‘ZRESTART_JMS_RCVR_CHANNEL’ which takes HTTP Destination as input and triggers Connection Test for the same. For every receiver jms channel, two variants are created that would pass the StartChannelHTTP Destination and StopChannelDestination respectively. Finally, a batch job is created with two steps. First step is to call the Report with Stop variant and second step to call the Report with Start Variant. It’s scheduled to be executed a periodic intervals.

Refer the below link

For every Receiver JMS channel, two HTTP destinations will be created. 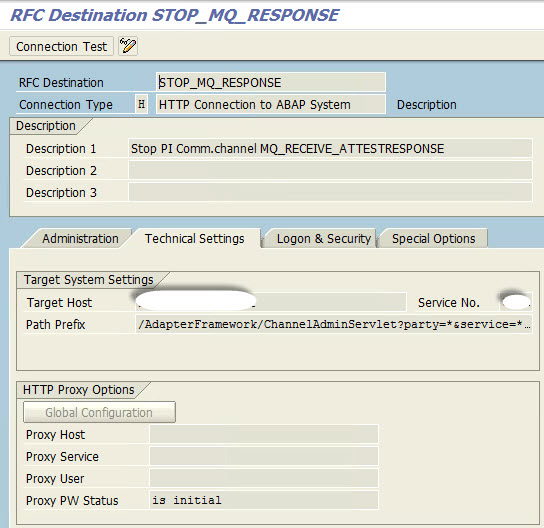 For every receiver JMS channel, two variants are created that would pass the StartChannelHTTP Destination and StopChannelDestination respectively. Finally, a batch job is created with two steps.

1) First step is to call the Report with Stop variant.

2) Second step to call the Report with Start Variant.

A batch job in SAP is a scheduled background program that usually runs on a regular basis without any user intervention. Batch jobs are provided with more allocated memory than the ones that are done in the foreground. They are used to process high volumes of data that would normally consume long-term memory if run in the foreground, as well as for running programs that require less user interaction. 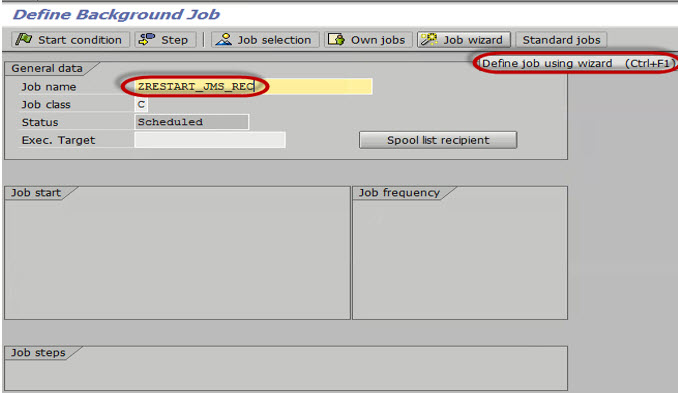 As shown in the above screenshot, you can also define batch jobs using define job using wizard.

Refer the below links to schedule batch job.

The connection-test poll job can be activated by setting the JMS additional parameter CONNECTION_TEST_POLL= true in the JMS receiver communication channel.

There is a restarting mechanism that restarts PI JMS communication channels every twenty minutes. This requires the channel to be in state ‘External’. In case the JMS channel is in another state, ‘Manually’ or ‘Automatically’ it will not be restarted by the restarting mechanism.

ABAP report ‘ZRESTART_JMS_RCVR_CHANNEL’ which takes HTTP Destination as input and triggers Connection Test for the same. 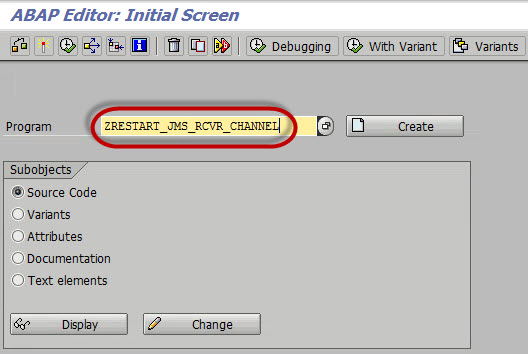 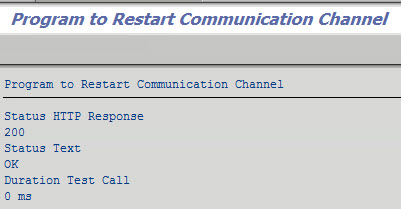 We have successfully implemented the solution for JMS-MQ receiver reconnecting issue and we are able to reconnect to MQ automatically without any manual intervention.