Before the meat of the day, links forwards and backwards to my views on the SapphireNow and ASUG Annual Conference:

My day started not with the ASUG Volunteer breakfast, but with work.  I needed to get a status update back to the office, which required finding a SharePoint folder (one among many), downloading a spreadsheet, saving a local copy in case of wi-fi outage, then doing the needful.  Which means pulling out the incomplete items from the last update, researching which have been completed, which have morphed into a different phase, and which are stuck waiting for the resource bus.  So I decided to do the last parts at the pancake house counter.  And like a car wreck where you can’t avert your gaze, I observed the manager chatting with a team member (or whatever their current title is) about the work schedule. 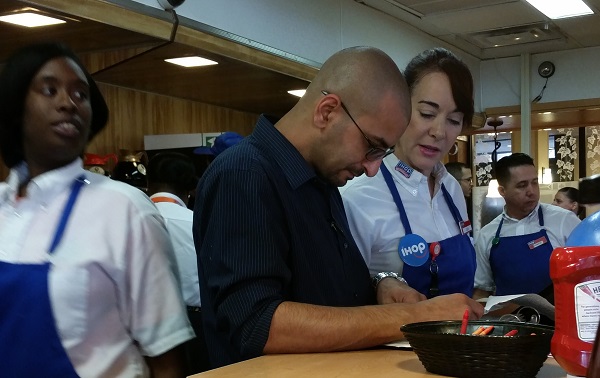 The line cooks had video monitors with tiles showing the unfilled orders, pushable buttons to advance their queue, and they had lots of interaction like “are my eggs ready?” and “who took my eggs?” etc.  But the manager didn’t have a smart app similarly pushing around the time slots to accommodate the necessarily fluid food industry work force.  The discussion centered around who could cover for whom.  Maybe their is an app for that. Good managers have a fall back plan just in case.  So that’s my BPX tidbit for the day.

Onward to the convention center, I spotted a flash of blue. 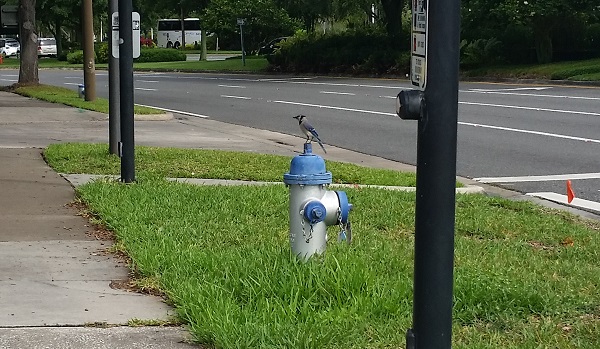 I’m sure blue jays are plentiful in some parts of the country, and I love seeing them fly.  If you’re wondering what this has to do with SAP and enterprise software, well, sometimes you just need to stop, take a breath, and enjoy the moment.  Particularly when you’re heading into the engineered chaos of such a massive event. Plus it’s my alma mater mascot.

One of the people in the SAP ecology I had not met, but with whom I have had more than a few blue pencil twitter conversations was the editor and pusher of SAP Press Kelly Grace Weaver [ Kelly Weaver ].  She asked for coffee while I was in the above pancake shop (working) so I posted back with a photo of the large coffee urn sitting precariously next to my laptop keyboard.  The next shot is outside their booth, and while it’s fuzzier than the one I tweeted soon after, it’s still a nice pose I think.  She wants me to write non-fiction ABAP Detective stories I think.  Pulp. anyone? 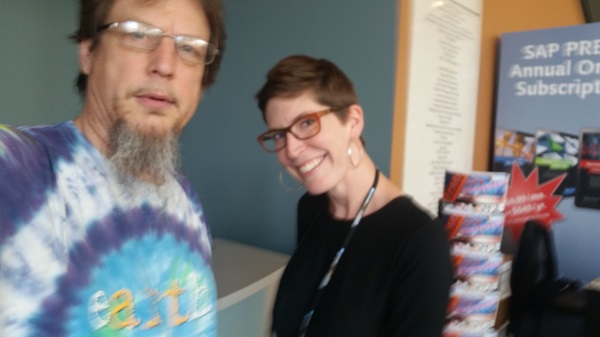 Walking the halls, I bumped into an old friend, Dipankar Saha of IBM.  It was great to catch up and find out which sessions he was presenting.  He’s authored the book on SAP MII.  Check out his twitter feed for more details: Dipankar Saha (@buddydip) | Twitter

His pictures are clearer than mine, whether that’s the phone, a steadier hand, or the overwhelming Florida sunlight at that moment I can’t say. 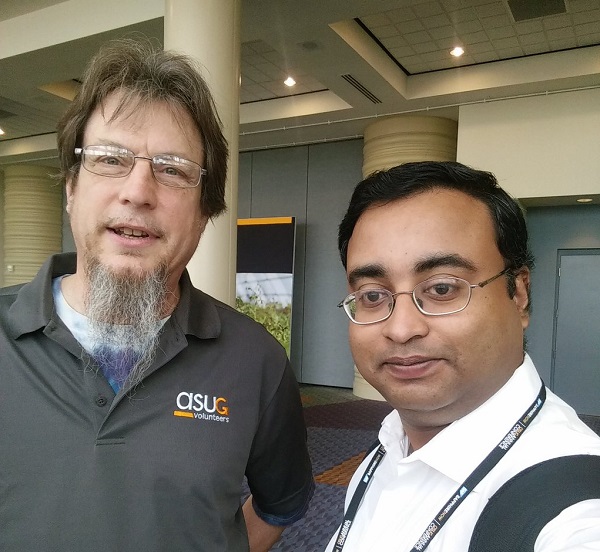 I worked the ASUG booth in the morning, as no sessions during the keynote and no other pressing appointments. One advantage of being a long-term community volunteer is by helping people along the way (pay it forward I guess) they seem genuinely glad to see me, I can ask for their time for my own issues and get terrific responses.  Y’all know where to find me if you need something. So here is Srini Tanikella with ASUG pal Kaela Altman under the cylindrical ASUG hub sign. 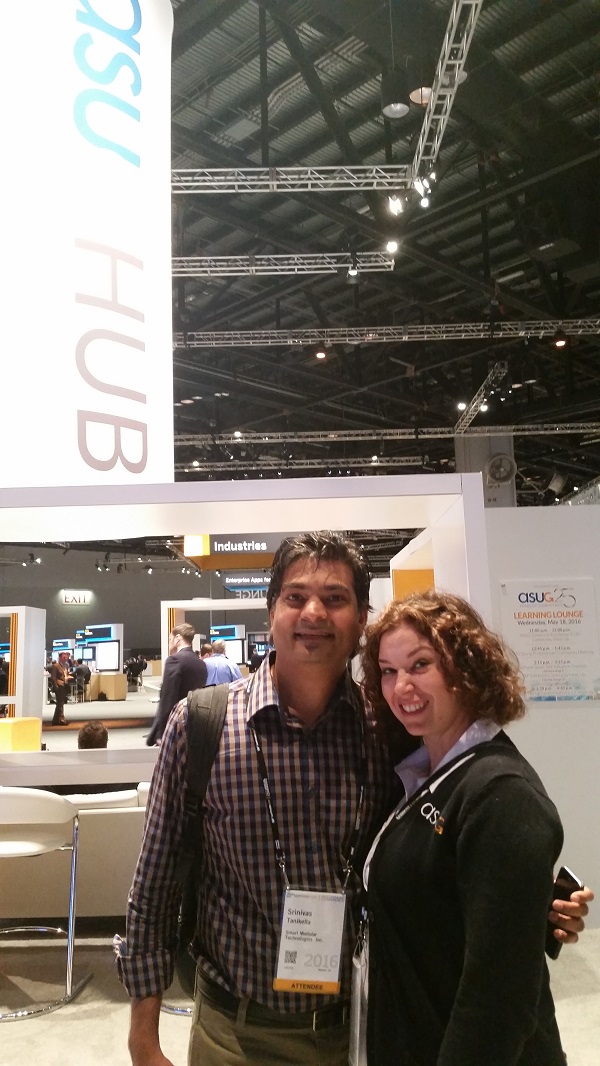 Sorry for the large format, but I tried to get the entire log in.  Almost made it.  You should read Srini’s post about this conference and the HANA road – SAPPHIRE NOW-2016: A lot more HANA? No, think Business Transformation!

With my colleague Simon To [ Simon To  ],  we hosted an SAP Mentor session with SAP Active Global Support, Kristen Cordell-Labarge [ Kristen Cordell-Labarge ], and Andreas Heckmann [ Andreas Heckmann ].  Under non-disclosure, I cannot be specific about SAP’s plans, current state, or “known bugs” but I can talk about a couple general ideas, and about what Andreas stated one year ago at the same Sapphire location (in the YT video linked below).  The new SAP Launchpad uses newer browser technology (not quite sure if it’s strictly HTML 5, UI5, Fiori or what), which means customers using older browsers may experience issues.  And who wants an issue when you’re trying to solve an issue?  The dilemma is that some customers have locked-in PCs for security reasons, and leave older browsers running due to older applications that don’t work on newer browsers.  We faced that in my office as well as some applications get upgraded while others are malingerers.  Not much can be done except provide advice on how to access the site as is.

Andeas talks in the video about a vision where support is not reactive (tickets are such), but either proactive (I’m paraphrasing) or at least, agile enough in the problem report phase that fixes are suggested during the initial contact.  Two ideas he mentions are chat with a support person (non-level one), and scheduled phone sessions. Are we at the point where HAL calls us and says “I’ve just picked up a fault in the AE35 unit.“? Nah.

Now, onto the meat, as I think I said above, with the session by Joel Albert – AJJO talking about their re-platform project.  First, images: 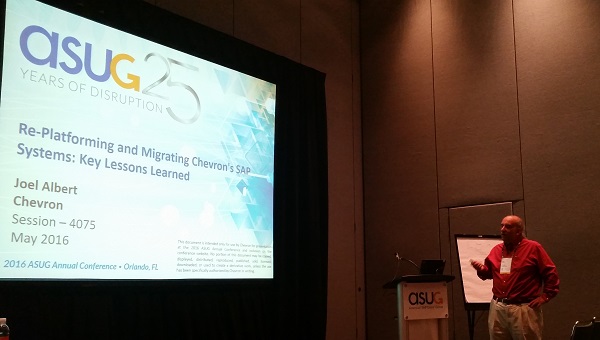 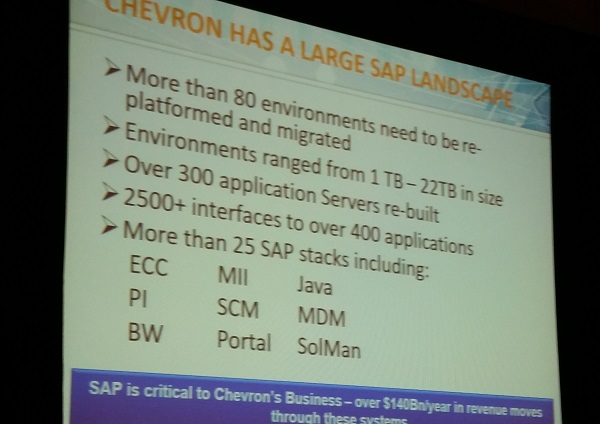 I wrote down a lot of notes during Joels’ talk (he is one of my mentors, and a predecessor in my current ASUG volunteer role); I will summarize some of my takeaways below.  And I hope to get Joel to do a webcast on this topic given not too many Basis type people attend these events any more.

Again, a fuzzy picture with Jonathan Becher and the SAP mentors.  I have a clearer image, but as it appears as if Jonathan is yawning, I chose this shot.  We were given a show-floor-tour of SAP’s Digital Consumer experience, which I, alas, could not stay for was I had an overlapping customer meeting.  In other words, what we need to know now, not what we need to know in the future.  I will get to the future someday. 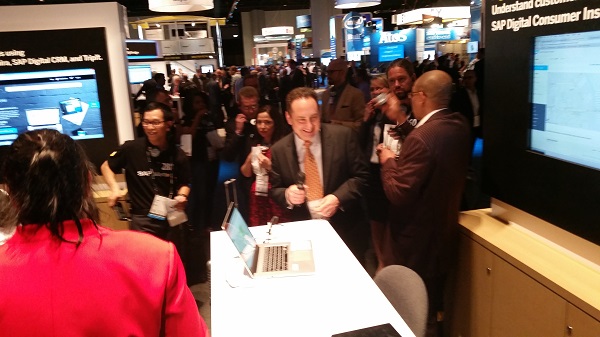 I met with a couple people from a well-known consumer electronics company and talked with them for nearly an hour about their “journey-to-cloud”.  These kinds of reference calls can be done over the phone, but in-person has so many more advantages it is hard to put a price on it.  There are always coincidences: I had been talking to SAP Mentor Alumni Vijay Vijayasankar about his homeland in India – Kerala – on Monday, and one of my contacts is also from there.  So we had a good human moment (I visited Kerala in 2013) which would not have happened on a long distance connection.

In the ASUG HUB area, some of the roughly 50 SAP Mentors at the show gathered for a debrief, where whoever wanted to speak was asked for one plus and one minus (kinda like the Thorns & Roses I’ve heard in the Boy Scouts, but minus the Butterfly that is often added for dreaming big).  Mine negative was going to be about too-long keynotes, but I changed it to something about getting more Mentors to the event.  My positive was finding a peer I needed to talk to, while I was waiting to talk to Joel after his session.  Win! 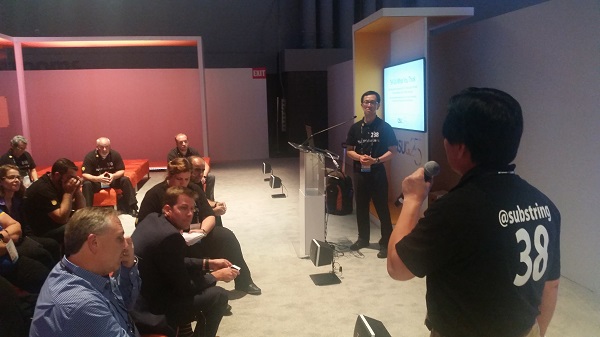 It's 11:19pm and I'm about to be whisked down a rabbit hole of Jim Spath blogs on SCN. Couldn't imagine anything better.

While I'd also vote for "more Mentors to the event", the shorter keynotes would benefit much more people. The whole event pretty much shuts down for the keynotes, nothing's going on except for some private meetings.

I wish the executives were more sensitive to the fact that the attendees might prefer to do something more productive instead of listening to someone's self-indulgent speech. Can you imagine William Wallace giving a 1.5 hr presentation in The Braveheart? Just get to the point.