The importance of client certificates in IoT

The use of digital (X.509 PKI) client certificates is certainly not new, but perhaps wasn’t exactly widespread, especially outside of corporate environments or large organizations – and certainly not in comparison to server-side certificates for websites. However, it is fast emerging as the key identity and authentication mechanism for machine-to-machine (M2M) communication in IoT scenarios.And for good reason.

Benefits of client certificates for IoT

I mentioned it before, but client certificates are qualitatively superior to other authentication mechanisms we have available, which are especially relevant in M2M communication. The main reason for this is that they are based on public and private keys, where the private keys are never shared. That is different from usernames and passwords, or token-based authentication schemes (with the exception of one-time-use tokens), where that information itself is sufficient to authenticate a particular host (user, or device). If ever an attacker would be able to tap the network successfully, capturing the username and password, or the token, would allow the attacker to impersonate that device. That is not possible with client certificates.The only way an attacker could impersonate the device would be if they managed to steal a copy of the device client certificate. That requires a substantially more sophisticated attack.

These client certificates should be used in combination with server certificates at the end point that ensure that we are sending any data to the correct place, without tampering.

The danger of listening in to the nework is of particular relevance in M2M scenarios where such tapping might be much harder to detect. Browsers validate server certificates, and have root certificates built in, and at any sign of danger will stop users from accessing the website without clicking away a strong security warning. In M2M scenarios, there is no browser to handle this, and any scripts that retrieve data and send it to an end point will have to take care of such checks.

It is imperative, therefore, that the code that sends the data verifies the server certificate, and the server validates the client certificate. Without such validation, you still get an encrypted channel, but there is a realistic danger that there is someone listening in. This is called a Man-in-the-Middle (MitM) attack.

As you can see in the diagram below, in a normal operation (described in the top half), a client makes a request and the server sends its own certificate. The client verifies this certificate with the Certificate Authority (CA) to check whether it is real, which itself sends a response that is checked by matching it with the pre-installed root certificates (that define the trust in the CAs). We’re asking a 3rd party to guarantee that the server says who it is. 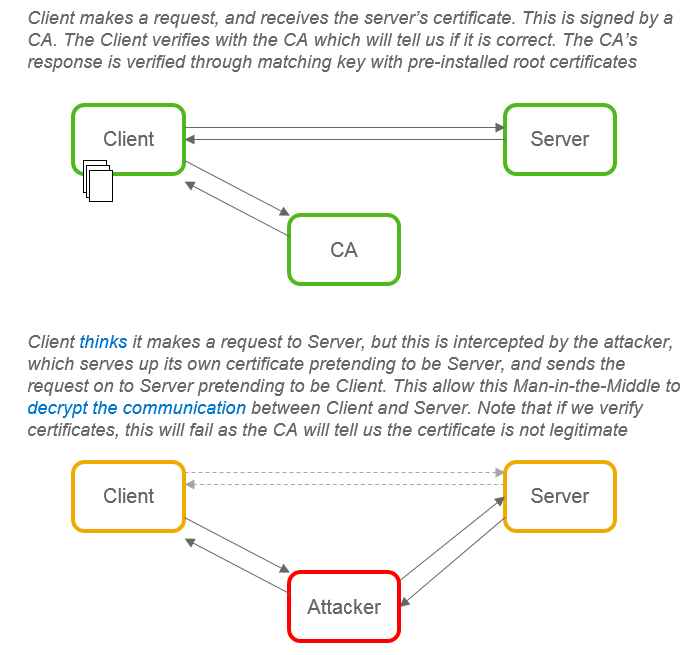 One interesting aspect – at least for reasonably controlled environments, and especially IoT solutions deployed within four walls or within a extended corporate network – is that the relevance of root CAs is substantially less. While they are essential in human-to-machine traffic (secure web browsing wouldn’t be possible without it), we can act as our own CA as long as we are confident we secure the location that holds the central directory of keys we verify against. That is, you can act as your own CA, which may bring down the cost of PKI infrastructure substantially. This is very relevant in situations where the devices might run in the thousands, tens of thousands or beyond to help reduce cost, without sacrificing security.

We can extend this already fairly secure client- and server-certificate mechanism for additional security. Think of it as “2 factor authentication” (but not exactly) for client certificates, as well as some other use cases I will get to in a minute. We have been working with a few partners on this and it works well. The diagram below will help to illustrate what this is. 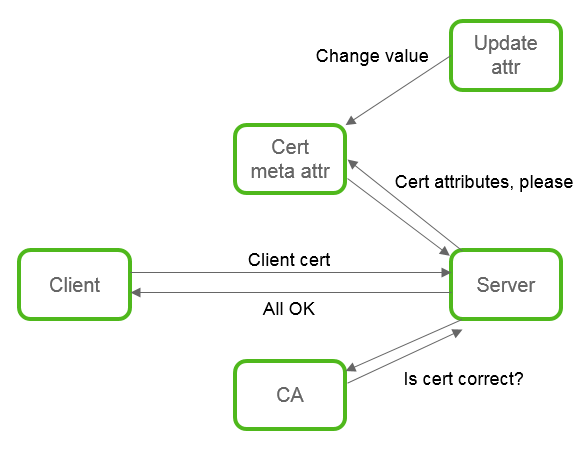 Basically, we are adding an additional check beyond the certificate itself. We maintain a series of metadata attributes that are associated with the client certificate in a separate location from the client and server. When a client presents its certificate, the server validates it with the CA, but also requests the meta data attributes if it is correct. The server should be aware of what the value of a particular attribute should be, and if this matches with what we retrieve from the certificate metadata, we proceed. If not, we do not accept the data submission.

This gives us an “instant revocation” option. Certificate revocation can take a while to propagate through the system, but if this attribute doesn’t match, we instantly stop data ingestion from that device. This is what we mean by a “2 factor authentication” like approach. It could even be scripted, so that if we receive an alert from our monitoring system that there is a possible compromise of a device, we change the certificate attribute value, and essentially disable the certificate (in case it might be stolen).

In addition, this can be used for more business related metadata. Imagine a situation where it is critical that specific steps are made in sequence and cannot happen outside of sequence. This could be, for instance, tracing a shipment from factory, through trucking company, to customs, to being loaded onto a ship, ran through customs again, picked up by another truck and finally arriving at the destination. To ensure integrity throughout, we can check that all way stations are hit in the appropriate sequence and send alerts in case something arrives out of sequence. It could be used to guaranteed refrigeration, where the moment temperature hits unsafe levels in the transport of perishable goods, we change the attribute value and won’t accept delivery.

Consequences of the use of client certificates for edge infrastructure

With the increased security all of this provides, there is a consequence, and that is that this will only work for devices that are capable of performing the necessary computation required for PKI. That largely excludes small microcontrollers, and quickly gets you into devices and boards running Linux (or Android). There are PKI schemes for lower-powered devices (16-bit) using elliptic curve, but generally this will require 32-bit at least. This may be problematic for certain IoT scenarios, especially those out in the open, running on battery power, but for many others won’t be an issue at all. For ultra-low-power devices, we have to use other approaches in which our security research team in southern France has done important work.

Using IoT gateways, which often translate IoT specific protocols to something more standard as HTTPS, you can get around the lack of PKI support in the devices somewhat, by placing the certificates on the gateway, but I am not a big supporter of that, as this breaks end-to-end security, and requires us to trust that the IoT gateway and the device communication hasn’t been tampered with. Trust alone doesn’t buy much in information security. using certificates on the gateway may be acceptable in some scenarios, in many others this is likely insufficient.

However, with the cost of 32-bit and 64-bit boards getting cheaper and cheaper, this restriction should increasingly be less of a concern. ARMv7 – already a dominant mobile devices platform – is an important platform for IoT as well. A Raspberry Pi Zero costs just $5. Other chip vendors are coming out with specific IoT designs as well, including encryption capabilities.

It is essential in IoT that we can rely on the data feed from the devices in our IoT landscape. End-to-end encryption and identity management between those devices and a data ingestion point through client- and server certificates provides us with that trust in a better way than alternatives, when implemented correctly. Where at all possible then, use client certificates (and an overall PKI certificate management infrastructure) for your IoT device infrastructure.