The trade route is the flow of goods going from one object (the supplier) to another (the buyer).

In the multinational groups this is a frequent scenario: a plant supplies one or more companies in the same or different countries, with goods to be sold or used as component of another production line.

The two subjects, buyer and supplier, create each other as customer and / or vendor depending on the role played in the business trade (if they sell or buy).

Mostly, as I/C customers / vendors, a specific naming convention and data setting will be used in order to address correctly the postings and the final data consolidation.

Let’s imagine, as example, that a company in France, by one plant, supplies several countries (example: Italy, Colombia, Malaysia and Pakistan), and that the group headquarter decides to replace this supplier with another one, always part of the group, based in Netherlands, as per below picture: 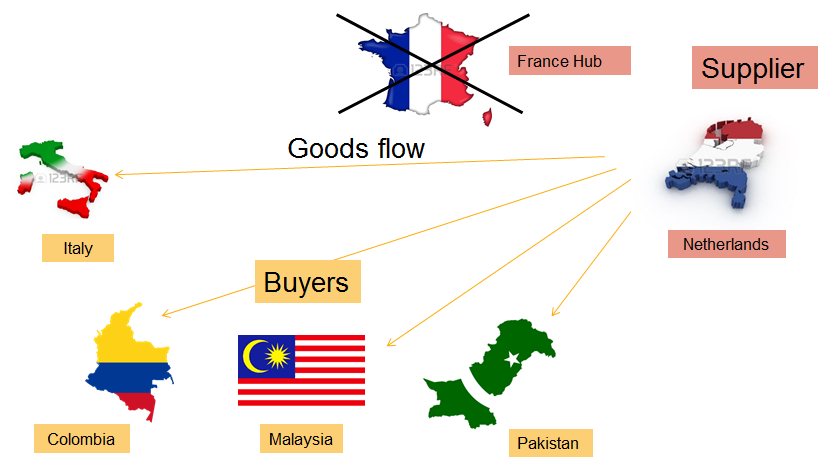 Before Day 1, when the supplying process will start from Netherlands, Italy, Colombia, Malaysia and Pakistan need to create Netherlands company as Vendor, and Netherlands the four supplied countries as customers. Of course if not all the players stay in the same SAP environment, the task will be performed in its own system / client (that can also be outside SAP).

The activities to be performed for the trade exit are the following:

During the analysis phase, it is important to analyze the following aspects

Since the PO / SO is already shipped / in transit / to be invoiced, it is not recommendable to modify it, in order to not cause trouble / mismatch between thepaper documents used for shipping the goods and what is in the system. In this case it is better to complete the purchasing / sales process using the old master data, and then reclassify the financial document on the new vendor / customer.

Identify the open items (AP / AR) to be reclassified

If so, it is recommendable the interfaces / IDOC / validations / substitutions with the new master data to be sure that the automatic work flow works properly, or the validation is correctly triggered, etc.

In case of Carve out / Sale of a division by a group, it is possible that temporary some companies run on the system of the previous owner, waiting to be migrated to the buyer’s system.

In this case maybe only part of the list of activities before mentioned has to be performed (only the Vendor or Customer part). In this case it can also make sense to not “touch” the logistic side (logistic Customer / Vendor, purchase info record, source list), and just create a new financial customer / vendor to be used to update the Sales Orders / Purchase Orders (in the “Payer” partner function) and migrate the financial open items.

This solution is based on the update of the partner functions within the SO / PO, as shown in the picture below for the PO:

In this case the Logistic Vendor (C03841) has not been changed / replaced with a new logistic vendor, and so no new Purchase Info records and Source Lists have been created. But a new financial Vendor (GK38_G2_11) has been created for the same subject and used to address the financial invoices (IR) to the correct vendor / reconciliation account. This choice has been motivated by the next migration of the divested division to the buyers platform. Changing all the logistic settings just for a short period of time during which the business keeps on running on the seller’s platform was not worth. The buyer accepted to have discrepancy between the logistic vendor name (the old hub – France, in the example) and the financial vendor name (the new hub – Netherlands, in the example).