When it rains it pours.  When the Kool-Aid ™ is poured it gets drunk.  When SAP talks, somebody listens.

I mentioned to a blogger friend I had read his most recent book on the plane ride to Orlando, as grist for my mill.  There were 3 themes or concepts I pulled out of the text that made sense to relate to the conference this week, starting today.

Trying to make sense of the presentations, speeches, and conversations with that backdrop in mind has been my mission, along with beta testing the new SCN, including blogs, discussion forums, and moderator tools, plus a new ASUG.com, and the fan letters from home.

On arrival, I went straight to the ASUG HUB space on the show floor for a check in with HQ contacts, meeting the new manager of Volunteer Services and other colleagues (see picture 1 below with Kaela Altman of ASUG and Bhanu Gupta).

I spent a few minutes listening to the presentation about secure transactions.  As my friend and colleague Greg Capps was already moderating the session I figured I could catch up on the details via another channel.  The Picture 2 shows a completely abbreviated session recap, where various token formats are described.  The basic concept of not keeping sensitive data on your own systems, but letting a third party with expertise in that area handle the data, seems clear enough with minimal explanation.  I’d probably lose less sleep thinking a hacker broke into their system than my system, but I’d still worry.

Simha R. Magal | Simha Magal – ERP Prof (Picture 3) No words, just admiration.  We chatted at the Mentor reception Sunday about how to help colleges and universities be more engaged, what the difficulties were, and to keep trying.

/ “Penthouse, Poorhouse, or Courthouse: Where Will Your Project Take You?” /

I spotted Michael Doane, who had commented on Twitter about my troublemaker blog ( Things to avoid at Sapphire/ASUG ); Mike gave a talk in the ASUG space on project management tools (picture 4).  In it, he talked about how and why projects fail, and ways to avoid going into litigation.  It’s fascinating, real world, expertise, and I can’t recommend his work highly enough.

This room was packed, with standing room only and a few empty seats. No wonder, because this is a success story rivaling anything I’ve seen; Sahal has a coherent vision, a track record, and stories to tell. Not all about his company alone, as Picture 5 below illustrates two images from his slides.  On the left side, a Korean subway “kiosk” with shopping by QR codes, and delivery to your door. (see link below, mangled).  The retail store of the future can’t be imagined now.

Sahal talked about the “Customer of One”, or ways to personalize shopping at the individual level rather than groups, communities, or sizes.  Doing so will require more layers of logic to be able to learn preferences, to coordinate the buying habits and other singular experiences, and to present these in a non-overwhelming fashion (who’s been turned off by blinking red LED coupon spitters?). One jarring note for me was the notion of “smart mirrors”.  At first glance (pun intended) it sounds a bit creepy.  Magic Disney-land this isn’t, without mirror-mirror-on-the-wall feedback.  So maybe it’s not an invasion of privacy issue, like hidden two-way mirrors recording personal details for who knows what end?  As long as there is some kind of warning, maybe it’s OK.  Every few weeks, one friend or another discovers pop-up ads from one site showing up in another, which generally creeps people out.

Sahal went into other topics, including supply chain optimization, drone delivery, and cloud computing.  While Supply Chain has been the brass ring about as long as I can remember, he had solid numbers to back up his story, including air freight delivery reduction resulting from better planning.  My view is the regulations will probably stifle drone packaging in the U.S. for some time, though the alternative of Uber computing bicycle messenger delivery is a done deal, apparently for NYC, Chicago, and SF.  Whether Uber or someone larger succeeds remains to be seen.

To some, cloud migrations are already old news; to others, hearing about the wins and losses makes not being a pioneer somewhat tolerable.  This session was in the Small/Medium Enterprise track.  Hearing how a small system was migrated to a new platform might have been rather droll, so this story was spiced by the addition of combining two separate legacy ERP applications into a single SAP instance on AWS. The implementation speed was dramatically fast.

Another aspect to this story that makes a good “take home” is the security and visibility to their business model, which is providing consulting services to Federal agencies in Washington D.C.  I had another appointment halfway through; as I was leaving they were talking about the AWS “Fed Cloud” service.  Not applicable to me, but good to know they’re being walled off in their own safe areas.

Gali Kling Schneider and Oliver presented to the SAP Mentors about the new SCN (couple links also below).  Lots of work went into the current state, lots is being done right now, and there’s quite a lot to do before this is fully baked and the old system is mothballed.  While SAP Mentor discussions are typically under a non-disclosure agreement, in this case since the beta is open to anyone, I can talk about it.  I’ve been testing for a couple days on the WordPress blogging platform, and am reading the detailed instructions prepared for SCN Moderators to to our job.

Sign up, test, and give feedback.  Visit the booth on the show floor (DE area – SAP runs simple).

Talking to Gali is like talking to a cousin who lives far away, but when you catch up with them it’s like no time passed.  Talking to Oliver is like stepping in front of a fire hose.  You’d better pay attention, or you’ll get knocked over and washed down the street.

From the SAP perspective, this is a big deal because they aren’t handcuffed by a vendor not releasing feature they want fast enough.  Imagine being stymied by a software vendor!  For users, I think Oliver said it well (and I’m paraphrasing) – the occasional user won’t care about a platform change, while the regular users with well established site bread crumbs will face some adjustment.

A tip for the experienced SCNers – save your current avatar, or personal image collection.  Unless you want to start fresh.

I won’t go into full rant mode about the conference app, as it’s just the tip of the iceberg trying to coordinate multiple tracks with conflicting requirements and media.  At one point, I had 2 agendas downloaded to Outlook and wiped them both to start fresh.  If I book 3 or 4 sessions that I want to be in simultaneously, no app can repair that.

One problem I faced with the Outlook/Exchange views on my phone was I could see the invite time in my inbox queue, but not the date!  But only some appointments, not all.

The first daily show reminder not probably has some great stuff in it, but I can’t read it on my phone at the delivered font.  When I expand it using finger swipes, the text is enlarged.  But the text doesn’t re-flow, so it’s still unreadable.

With Jocelyn Dart in the foreground. 😉 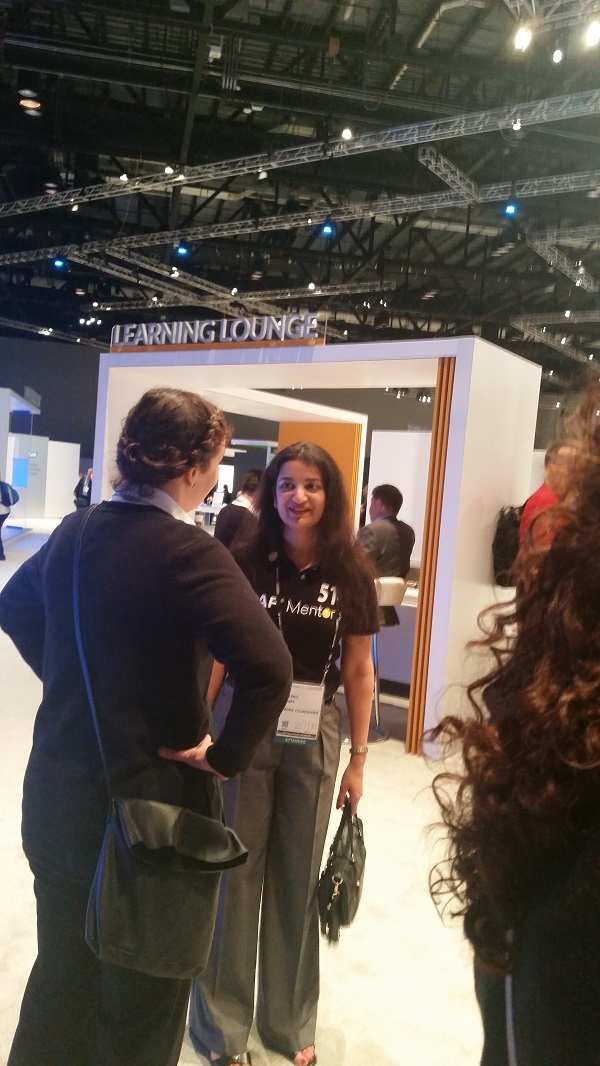 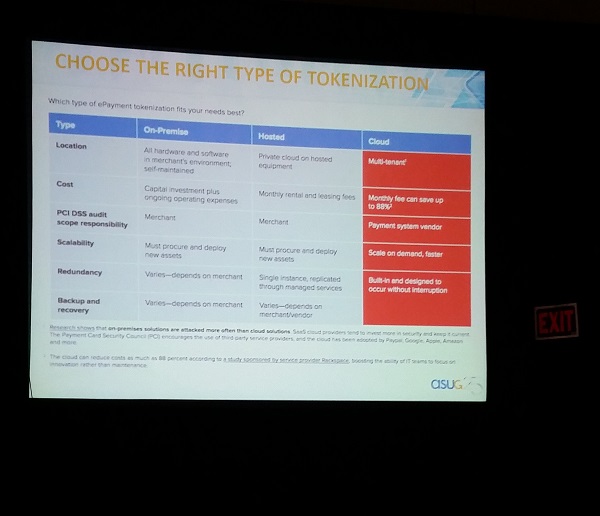 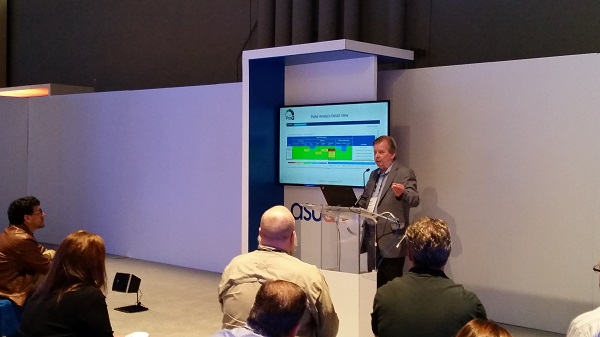 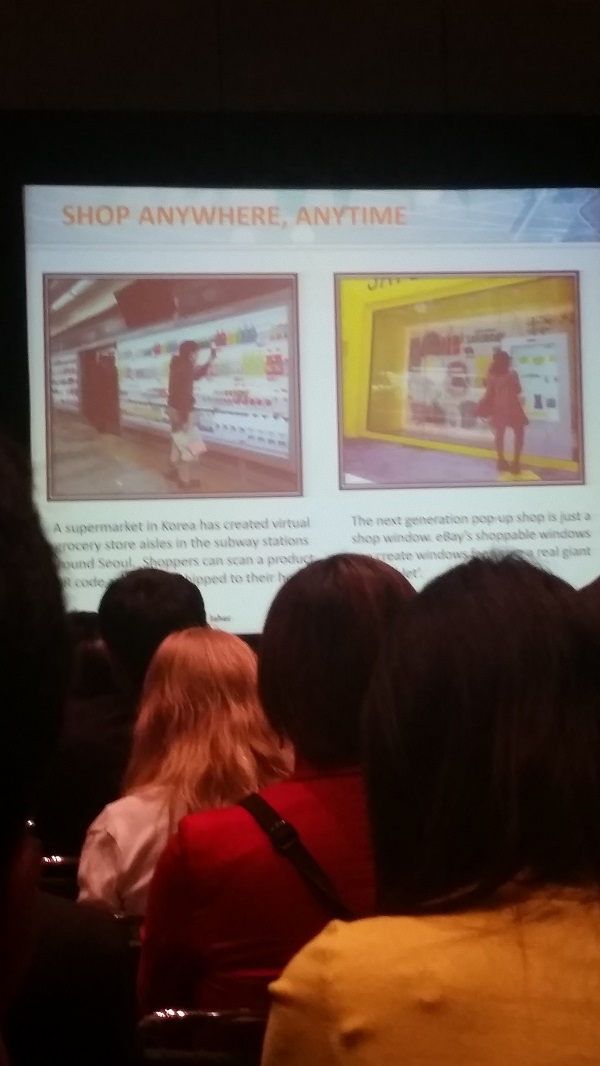 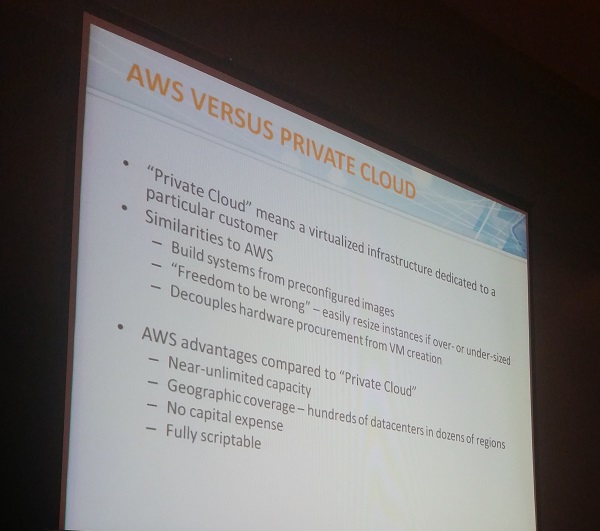 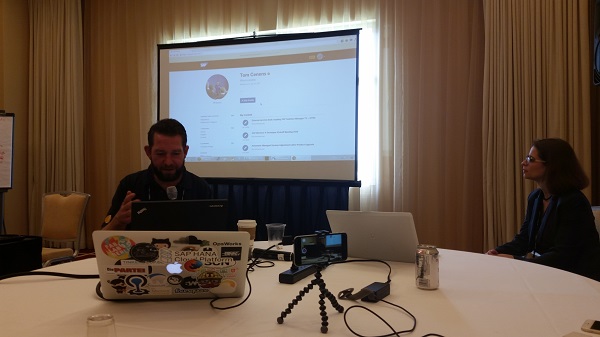 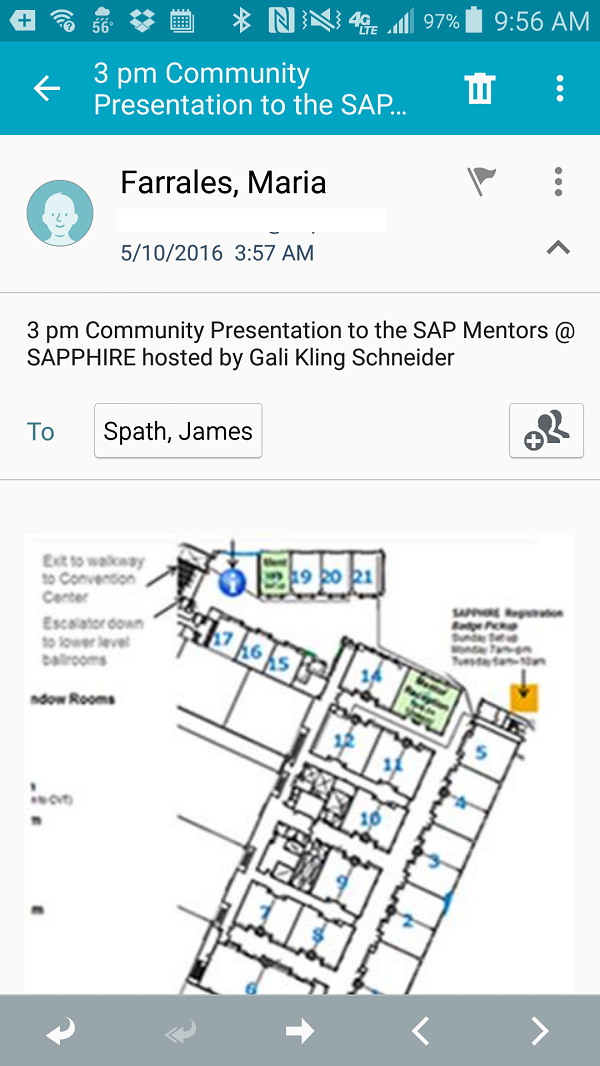 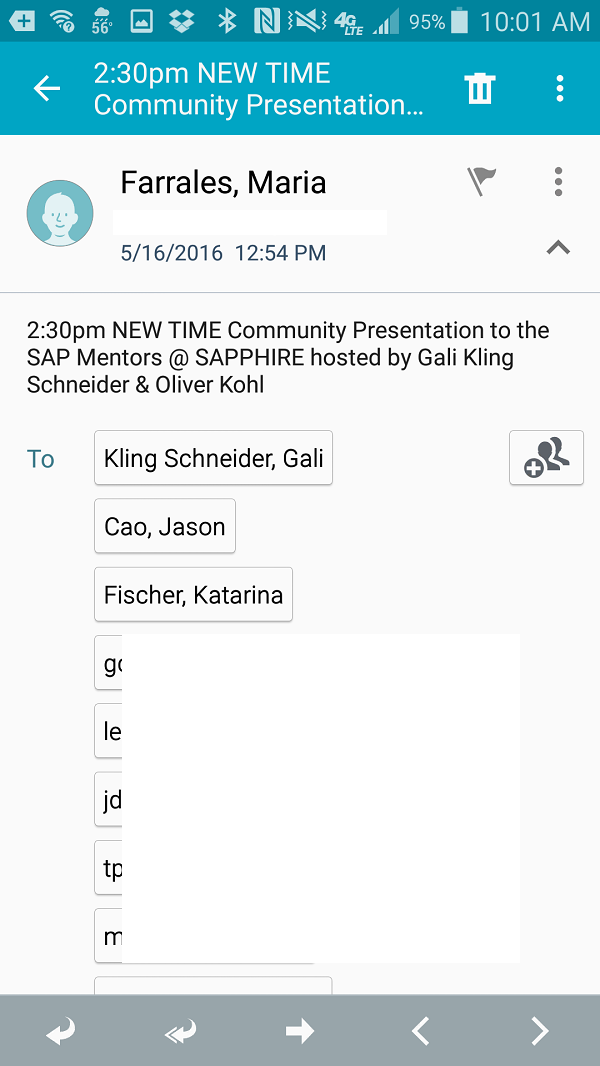 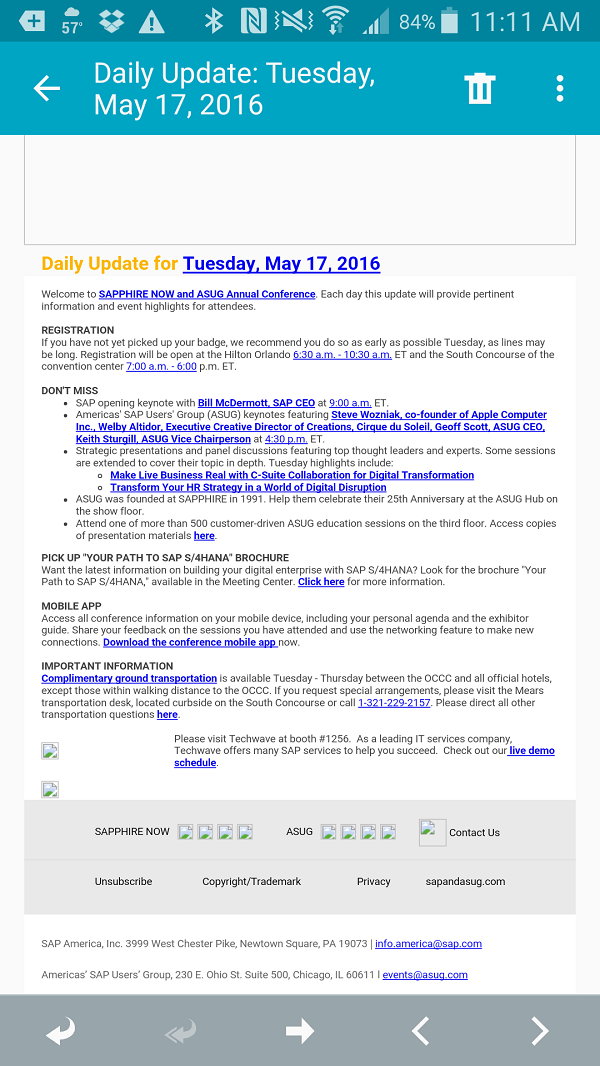 Oh, and someone wanted to see pictures of bins. 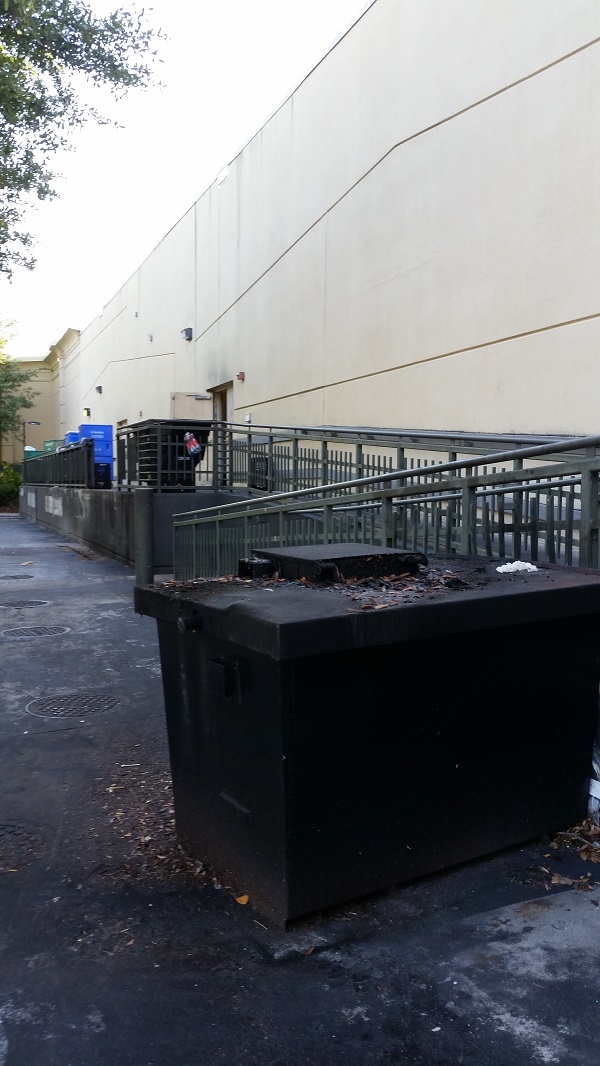 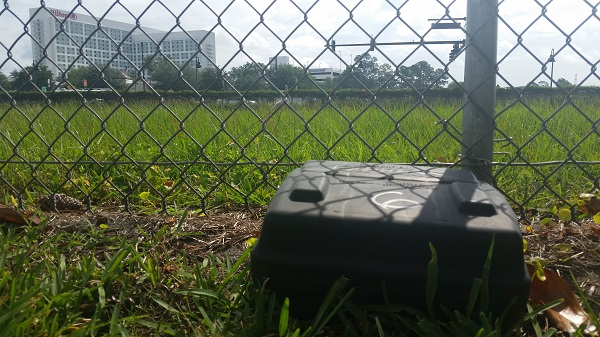 Awesome bins, Jim! 🙂 Thanks for the links! Smart Mirror, jeez... I already dislike the dressing rooms at most stores, but this is yet another incentive for ordering online and just using brick-and-mortar stores as a return dumping outlet.

Yes, but do you know what each of the bins are for?