Please find the Source Code and User Manual as links below.

Whether it is a functional or technical transaction or a basis transaction, everything in SAP or for that matter in any technology, boils down to database, and as we know database means tables. Apart from the standard tables that SAP has, a business will usually have to create many ‘Z’ tables for its custom development. Many times a business ends up with hundreds of custom tables and always their maintenance is a real cause of concern as the usual maintenance tools in SAP have their own issues. Usually, a table in SAP can be maintained in three ways,

The concerns with each of this are listed below:

3. Via a custom transaction

My tool, ‘SAP Table Maintenance Tool’ called ‘ZTMTOOL’  is a solution to all the above concerns and makes the table maintenance simple and secure. Some of the features of this tool are:

All the changes (i.e., create,edit,delete) are logged into a table (called ZTMT_HISTORY).

Records can also be created in  large numbers at once, just by uploading data as excel

All the maintenance can be done in a neat looking ALV Grid with a very easy user interaction.

A dynamic selection screen for any table to view desired entries based on selection criteria.

The ALV output displays the needed columns or fields as selected by the user.

Apart from the key fields, a user can just opt to view and maintain only the needed fields.

Simple maintenance of long text fields (> 128 characters) in a popup window with a text editor.

How to implement this tool?

On how to use this tool go through the user manual below: 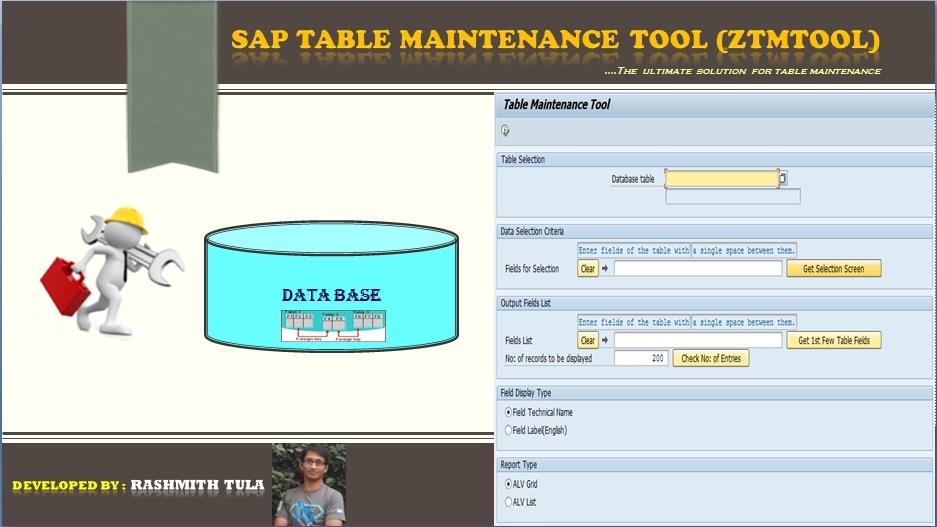 This is cover page, click on the link below to download/view complete user manual: