It’s that time in the year when me, my fellow UK SAP Mentors and our friends in the SAP world begin thinking about this year’s Inside Track event in the UK.  I’ve been involved with the event over the past few years, firstly in Manchester and then more recently in Sheffield where we’ve had the use of Sheffield Hallam University’s facilities thanks to Stephen Lofthouse. It’s a great event for so many reasons, mostly because a bunch of like-minded people get together, share knowledge and experiences with each other and generally have a fun time, often over a beer or two.

However the challenge we always seem to face in the UK is getting more people to attend.  We usually sell 100-150 tickets via Eventbrite for the event but typically have a no-show rate of 60-70%.  This is a problem for a number of reasons so this year we wanted to try and gather some feedback from our potential audience early on, to help influence the shape and content of the event.

To this end I created a simple survey using Google Forms, which has been published and open for over a month – SITnorth UK (SAP Inside Track UK 2016.  The idea was to get some insight into times, locations, content, etc. that would interest people and hopefully encourage them to attend.  Since it was first published, it has had only 37 responses, which in itself is pretty disappointing.

Interestingly, the number of clicks to the survey compared to the number of responses correlate pretty well with our tickets purchased via attendees of the actual event: 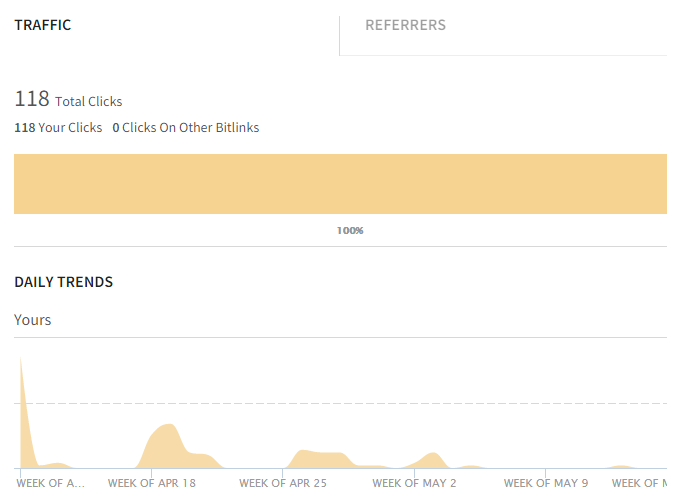 Anyway, here are the outcomes of the survey to date.  This will shape how we plan the event later this year: 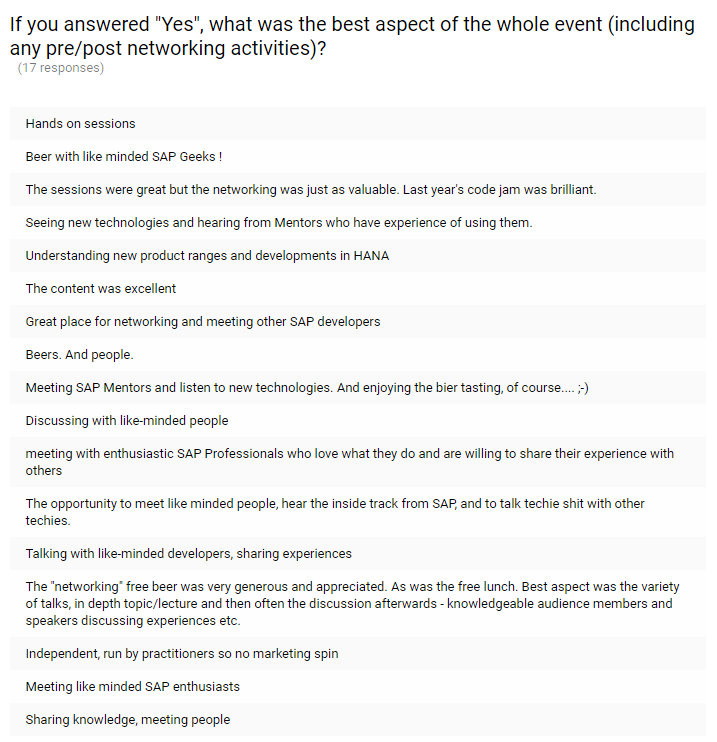 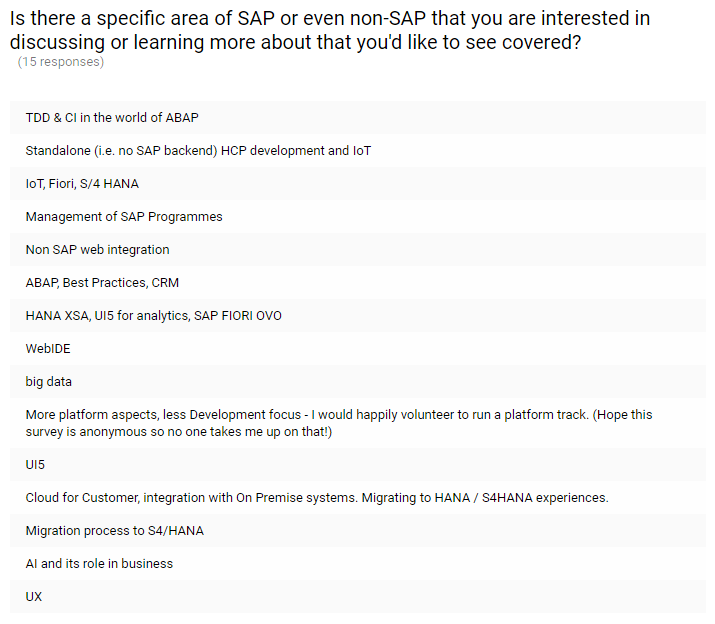 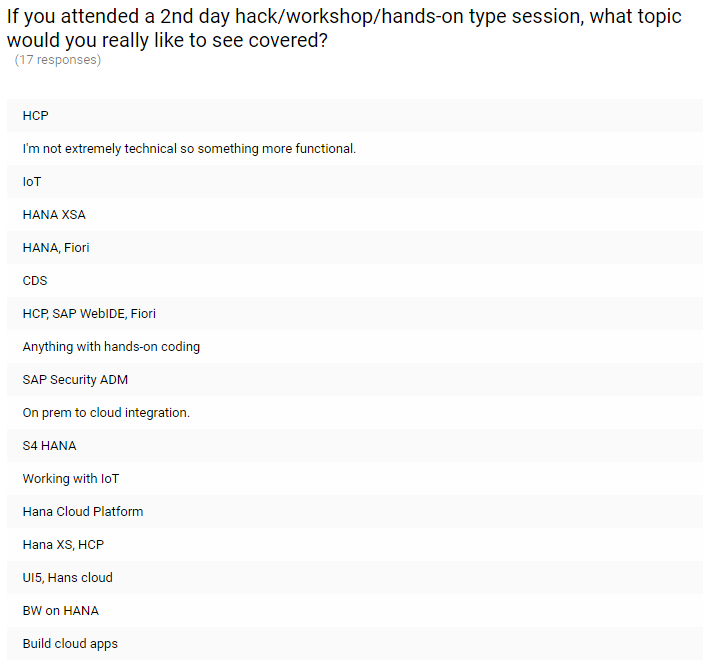 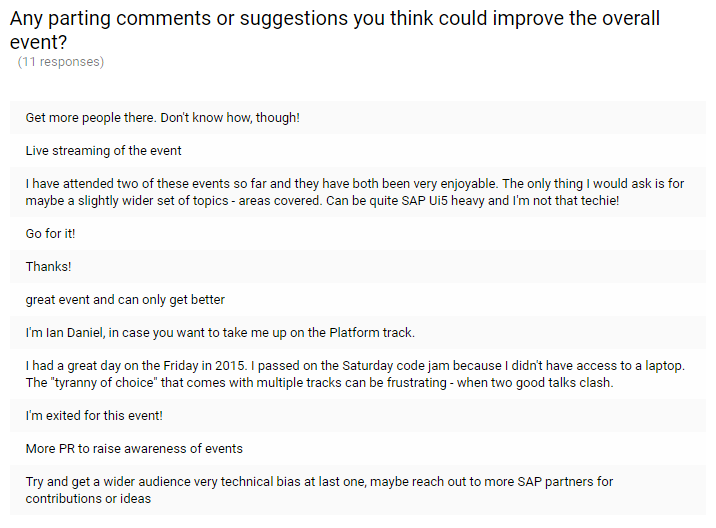 I’ll post a follow-up once we’ve had time to digest this information and figured out what it means, however thought some of the results would be useful insight for others thinking about Inside Track events.

So, a Friday and Saturday in Manchester, with a social event on both Thursday and Friday nights, lots of live demos on Friday, and a hands-on day on Saturday based on HANA and maybe IoT?

All we need are dates...

From my point of view it is important to have a openly visible attendee list in the Wiki.

Several effects are coming with it:

We used Eventbrite for SAPInsideTrack Frankfurt the first time.

It made it easier to handle the registration process and give free seats to the waiting list without a big effort.

But it made it harder to copy the list of registered participants back to the wiki.

80 seats were available and about 40 on the waiting list we contacted as soon as there was a cancelation coming in.

I'm pretty sure that doing the SAPInsideTrack (SessionDay) not on normal business day has some positive effect:

- you get more serious registrations

- you don't get in conflict with last minute work commitments

(ok, you might get more in conflict with last minute private commitments 😉 )

So .. good luck for organizing sitSheff/sitMan.

Great news on the dates and fascinating information from the survey.

My feeling is you need to get the message out of the scn bubble and twitterverse as I normally find out about it by chance and I'm keen as mustard, so for those that don't know about it, I think we need a new channel to reach them.

In terms of marketing, do SAP help, with a contract list of some kind we could reach out to?

Also, would the uk sap user group be able to promote it?

Finally, the system integrators of the world don't seem to be involved, may be we can reach out to them - HCL could put a coach on from Chesterfield 🙂

Happy to discuss more if this is helpful.

The User Group have publicised it the last couple of years, and I'll ask them to do it again this year. I know who to ask in SAP UK to try and get the word out, too, although we haven't don that in the past. Once we have the details sorted I'll get onto both of those 🙂 .