Sunday Excursion: Ups and Downs, all in one day!

Sunday was a completely different story: our client, the Academy of Entrepreneurship in Chengdu invited all Grasshoppers to a bus tour to the country side including friends and family. With a delay of a few hours, somehow there was something wrong with the first bus, we finally got started. And same procedure as always, we were not the only ones who had the brilliant idea to flee the city. It took us ages to arrive at our first destination: a tea plantation near the mountains. 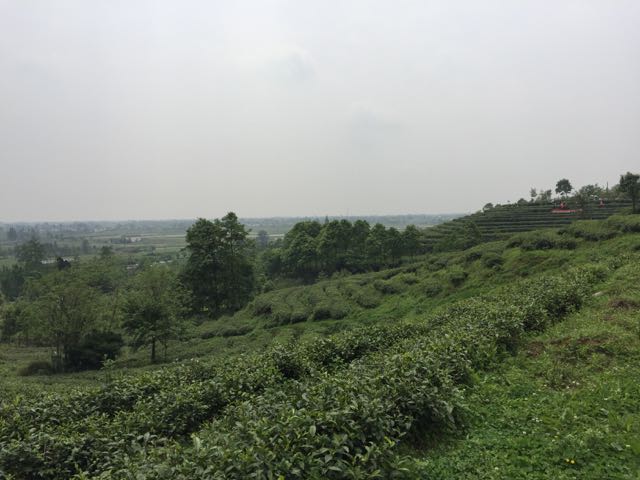 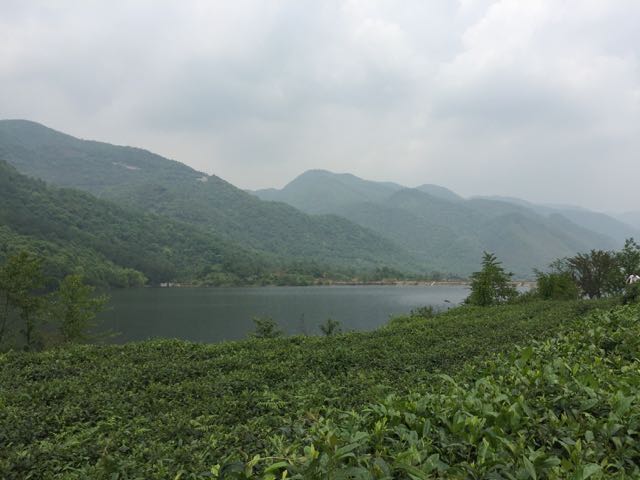 The day was sunny, we arrived at a tea factory first, and here the first stop was of course: the toilets! Better not to go into further details, I needed a second round, as the first experience was simply too shocking.

Anyway, all the women in our tour got theses “lovely” shirts and headscarves to wear, grrrr, the boys only got a basket on a string to collect tea leaves. 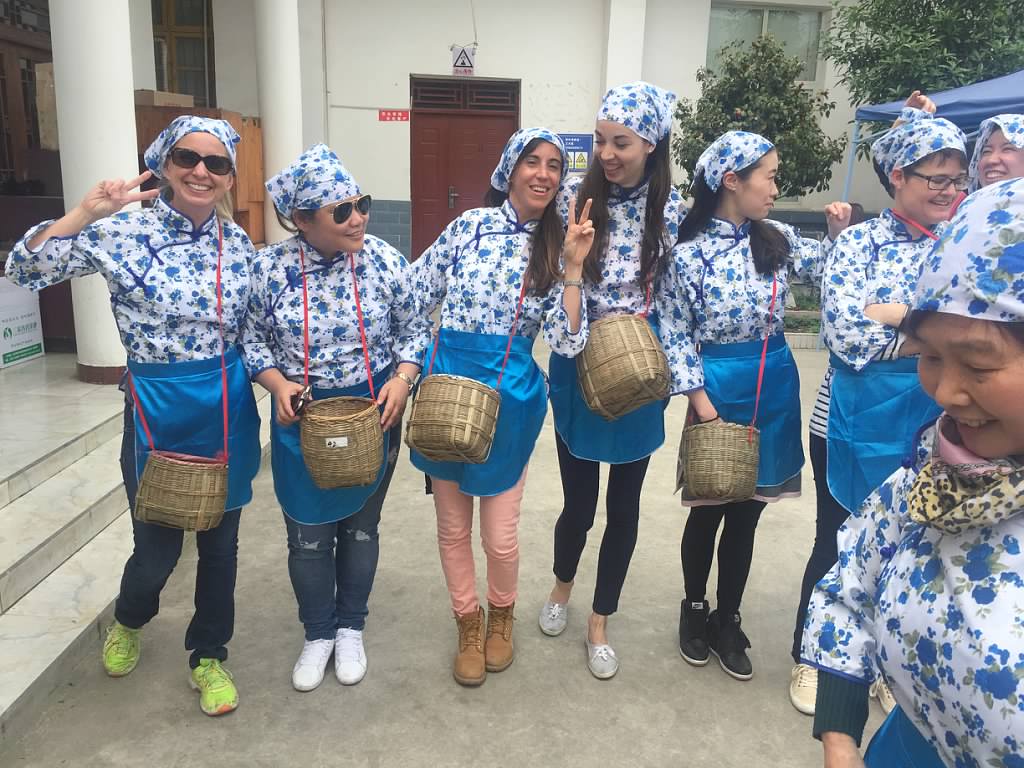 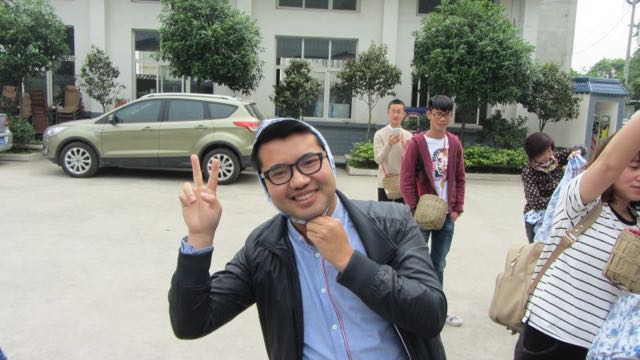 Some of us, or to be precise only Jeremy, found all the tickets that were hidden between the tea bushes, and funnily enough, he was the only one who had barely collected any tea leaves. But he had the decency, it only needed a minor twisting of his arm, to distribute the tickets among us. Later, back at the tea factory, we found out that those tickets were then transformed into nicely packaged tea, or lovely tea sets. I bought some Jasmin tea and a nice glass tea flask, that you can fill with tea leaves in the morning, and then you simply add water during the day, very convenient!

We also experienced how the freshly picked tea leaves were prepared: 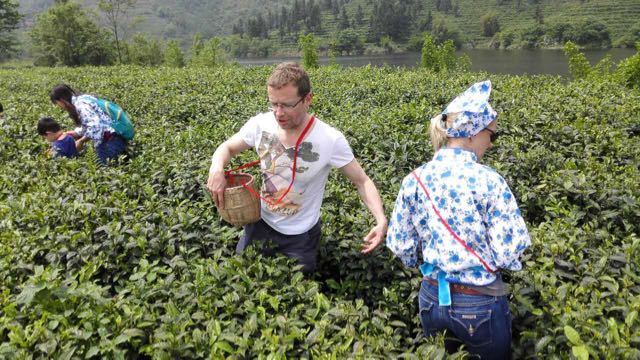 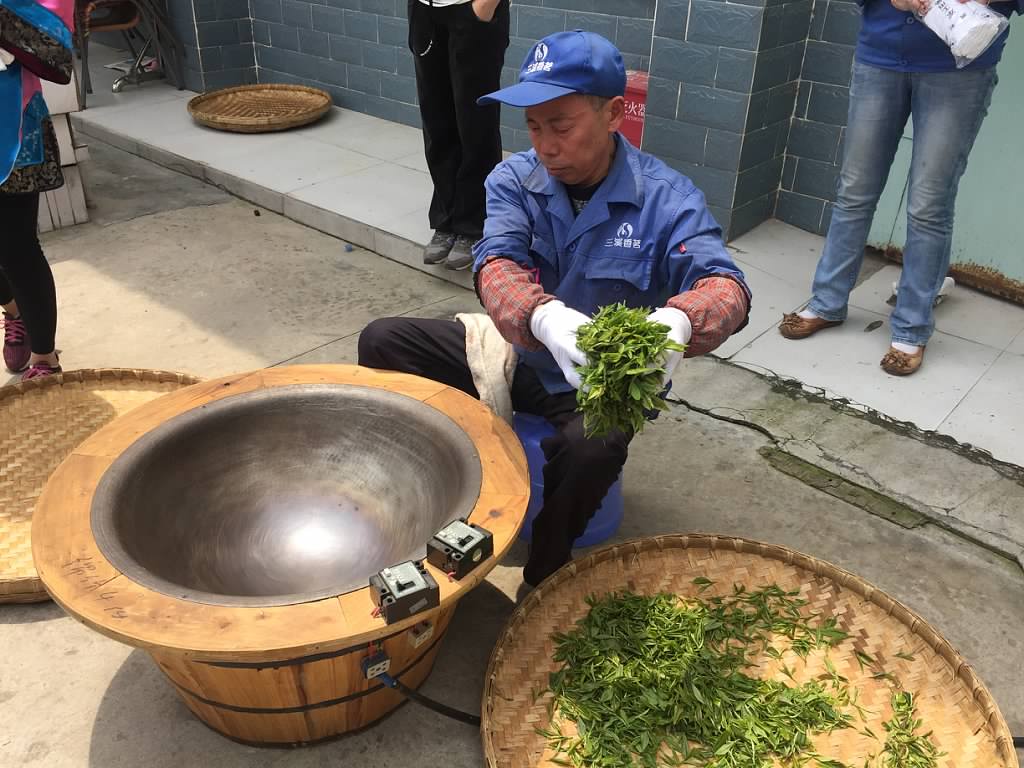 From there we went to a little town, only 500.000 inhabitants (!), were we had a real feast at the restaurant of a relative of our client.

There were two nicely laid out tables for the whole group, and this is how it looked at the very beginning: 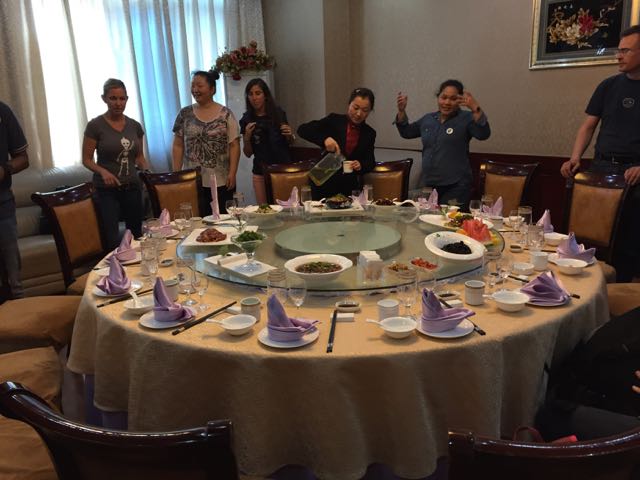 And here is the transformation after the meal was already well underway: it was magnificent, there was everything there that has to be dished up in a traditional Chinese meal, and there was plenty of it! It was spectacular! And do not think that there were only the “normal” dishes, no! There was jelly fish, very thinly sliced, and other delicacies that we cannot even spell. It was truly a wonderful late lunch.

Replenished with excellent food we headed off to the site were in 2008 a terrible earthquake had happened. We did not know exactly what to expect, and we were certainly not prepared for what we found.

The entire site in Hanwang, which before the earthquake was a thriving industrial town with lots of factories, public buildings, hospitals, banks, schools, and apartment building has since become a memorial center with a memorial building and the site itself with all buildings badly damaged by the earthquake. It was heartbreaking.

We were driven around in little mini-vans, and it is very hard to find the right words for what we saw: empty and cracked 5 – 6 story buildings, destroyed shops, fallen trees, collapsed and condensed buildings where the floors have crashed down and buried entire floors in between.

Below you see the clock tower where time literally has stopped at 14:28 for so many people. 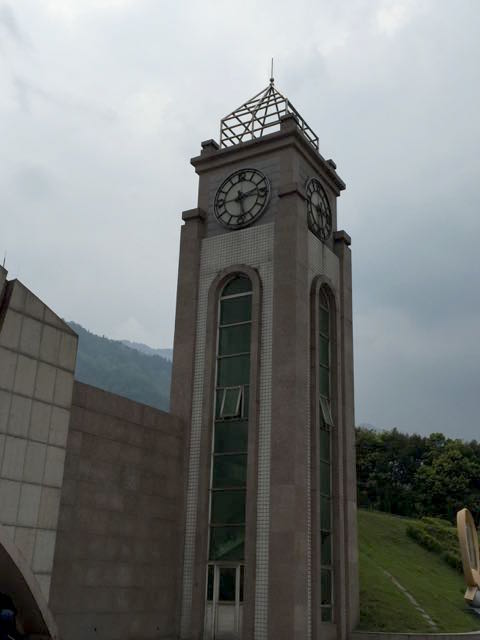 In addition of being in this sad place, the weather had changed and it started raining. Very suitable indeed. 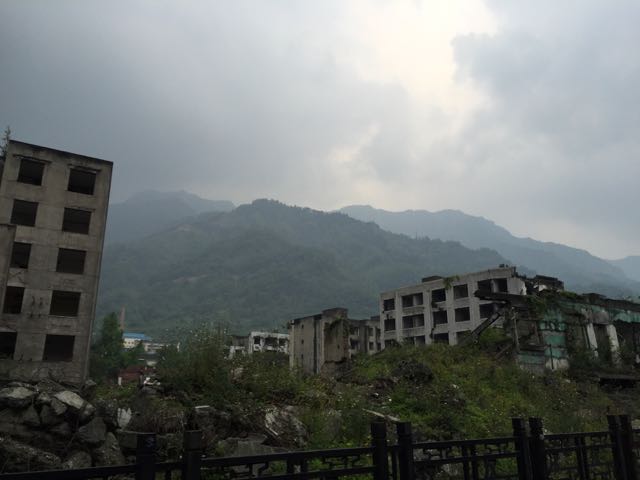 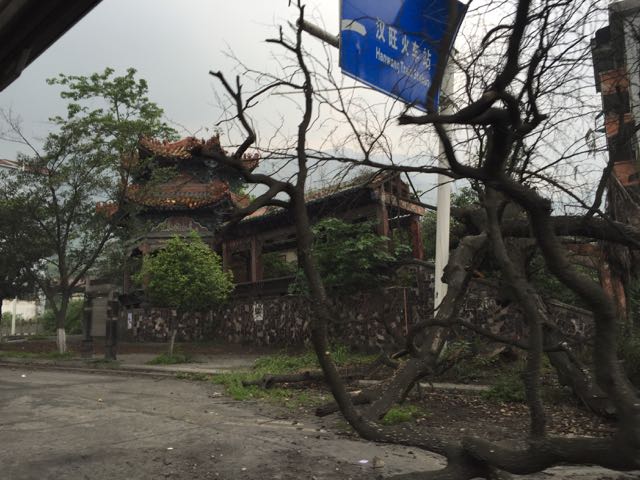 The day ended with our tour back in the same traffic jam, I am sure there were the same people sitting in the same cars as in the morning.

Back in Chengdu we stopped at the largest building of the world, the New Century Global Center. It is impossible to photograph or to grasp its size. It contains luxury shopping malls, restaurants, offices, and indoor swimming pool, a hotel, everything is super-sized! 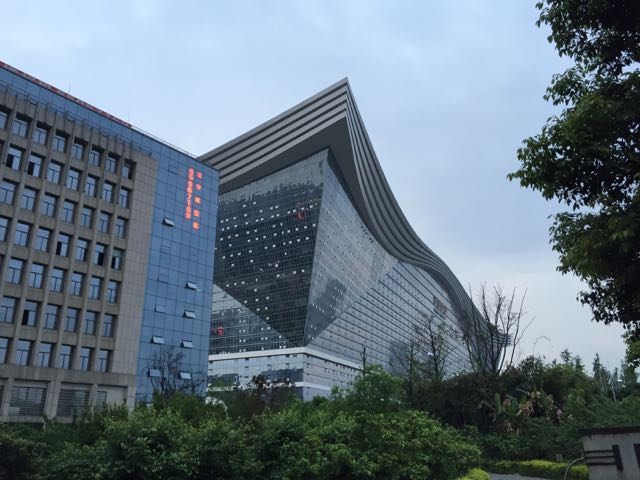 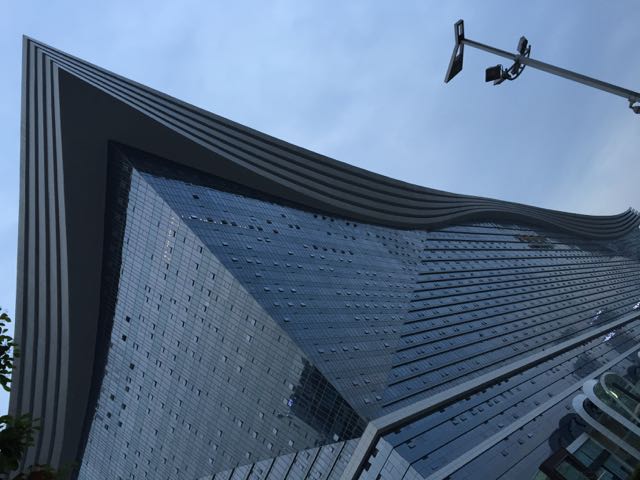 It was overwhelming in a very different way.

We then went to a Tibetan Vegetarian Restaurant and had another tasty experience of the huge variety of food you find in Chengdu:

That evening I crashed into bed. It had been an emotional day, and I think stopping at this place of commerce, where life was bustling, was one way of getting the images out of our heads.

This was our last weekend we, the Grasshoppers, had together in Chengdu.

The whole blog series can be found here: