In this post I am documenting my encounter with SAP Lumira and express my thoughts on how this tool has been a fundamental component for my exploration into Business Intelligence and Analytics. I aim to gain more knowledge in these areas by providing a novice point of view; and in so doing engage more insights from seasoned veterans in this field.

When people speak about gateway drugs… SAP Lumira must be my gateway drug into SAP Analytics. I first experimented with Lumira in a Business Analytics unit at Victoria University. This tool opened up my eyes to the world of Analytics. Internet of Things and wearables; especially in the sports industry; are particular areas of interests. The more I experiment with Cloud for Analytics on the HANA Cloud Platform, the more I feel as though it is Lumira on performance enhancement steroids. And that it has the potential to become a major player in the sports industry.

Working on my first blog (this one) as an assessment for a unit BCO6181, headed by Tony de Thomasis, I became immersed in wanting to know everything. I quickly realized… baby steps.

Being an avid football (soccer) fanatic, I imagined it would be interesting to bring football statistics to life using Lumira visualisations. I sourced a flat file dataset from the EPL 2011/12 season from a statistics website and began my experimenting. My goal (pun intended) was to find hidden gems of data that goes beyond the norm of top scorer or most assists. I instantly felt like Peter Brand in a scene from Moneyball… Okay, back to reality!

I knew what I wanted to do. The real question was “How do I do it?” As a novice, I started following online Lumira tutorials using the links below:

Following on from my learning; I went about creating several visualisations that showed most effective league player in terms of goals scored per minutes played in AWAY games; most effective player in the final third of the pitch and; from which area on the pitch a team conceded the most goals.

To demonstrate; by looking at one of the visualisations: 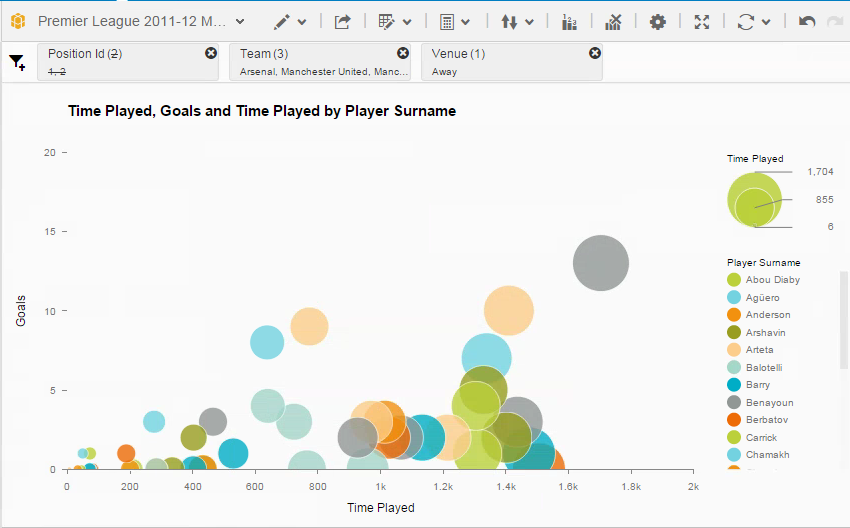 Having readily available interactive visualisations that can quickly identify these scenarios game-side will undoubtedly add significant value for a coach and players alike. Information is literally in the palm of a coach’s hand to assist in making critical decisions such as; when to relay key strategic instructions to change team dynamics or identifying the best time is to bring on that underrated goal machine.

Similarly, by knowing from which area of the pitch the team concedes the most goals coaches can bolster training sessions accordingly to combat these weaknesses. During a season this may not easily be determined by coaching personnel, especially due to large amounts of structured and unstructured data. Integrate SAP HANA real-time capabilities with this Big Data received from technologies such as wearables (to track player movement, work rate, health indicators, etc.) and soon our sports stars  may soon transform into bionic men and women!

My awe for naturally gifted players, managed by intuitive geniuses (*read Sir Alex Ferguson*) may soon have to take a back seat to the analytical insights and possibilities of the future.

Lumira may have taken a dip in the pecking order of popularity because of newer, younger and flashier tools; but it still packs a big punch! For me it is a tool that stimulated my knowledge and a perspective into what competitive advantages analytics can offer a business. It is a powerful tool that can be easily understood and utilised. A tool that an inexperienced analytics enthusiast can use to familiarise themselves with in the world of agile visualisation. A stepping stone to discover other visualisation offerings for finding answers to unasked questions.

A quote that I has stuck with me throughout my time at Victoria University – “There are things we don’t know we don’t know” – Donald Rumsfeld. I am excited for what the future holds and eager to learn more of that unknowns.

See you in the future!

Special thanks to: Tony de Thomasis and Paul Hawking for their dedicated guidance.

Special mention to: Angad Singh and Nash Gajic for showing my fellow students and I that the future is ours to relish.