The 2016 Oscars took place two months ago and film stars were recognized in 24 different categories. If you ask a film enthusiast “What’s next?” they would most probably answer “Well, The 2017 Oscars!” This is, however, not the answer you will receive from our early talent stars at SAP. For them, the star awards are just getting started. There are several awe-inspiring competitions and challenges in 2016 where they continue to showcase their amazing talent.

This is exactly what two of our IoT Smart Connected Business Early Talents Jitendra Sharma and Sharayu Nargolkar are up for with their participation at the NASA Space Apps Challenge 2016. It is one of the world’s largest international hackathons, which inspires enthusiasts to share their innovative ideas in six different categories, incl. technology, aeronautics, space station, solar system, earth and journey to Mars. Engineers, developers, artists, etc. connect over mission-related challenges to develop innovative open-source solutions which aim to solve problems at home and in space. The participants can use real data sets from NASA and other global collaborators to create social impact by addressing real global challenges we face today. The two-day hackathon event, held on the weekend of April 22nd-April 24th, was organized for the first time in Silicon Valley, CA and widely supported by SAP. It awards exceptional results in categories like best use of data, hardware, mission concept, galactic impact and inspiration. A special sixth category is defined by people’s choice. As you might imagine, it is no small feat to become the public favorite. And yet our rock stars at SAP Labs Silicon Valley got the People’s Choice Award with their “Airie” prototype!

Consisting of developers and designers, the “T-7” team chose the “AirCheck” challenge in the Earth category. They built a web application “Airie” using MEAN stack technology as well as NASA Earth data with weather information, Google Maps API, Amazon Advertising API and Pollen Count. The team and their prototype were evaluated on 5 pointers, including impact, creativity, product, sustainability, and presentation which allowed them to secure the People’s Choice Award for Silicon Valley.

Driven by the fact that millions of people have conditions where air quality can drastically change the state of their health, the team started looking at ways to mitigate these effects. To start with, users around the world can report their illness and symptoms. Based on NASA’s weather data and the crowd-sourced information of current regional airborne illnesses, data is collected to analyze the correlation between weather and health conditions, allowing a predictive model to be built for a possible alert system. Users are able to view daily forecasts before conducting outdoor activities, subscribe to notifications on air quality changes anywhere in the world, and track the progress of their health through health summary reports. A recommendation feature is added on top, giving information about top pharmaceutical products bought based on Amazon purchases and ratings, home remedies and a future scope implementation of map view of doctors in the user’s area. A unique feature of “Airie” is that it allows users to create multiple profiles within the same account so that they can be alerted for warnings for not only themselves, but also their close ones. 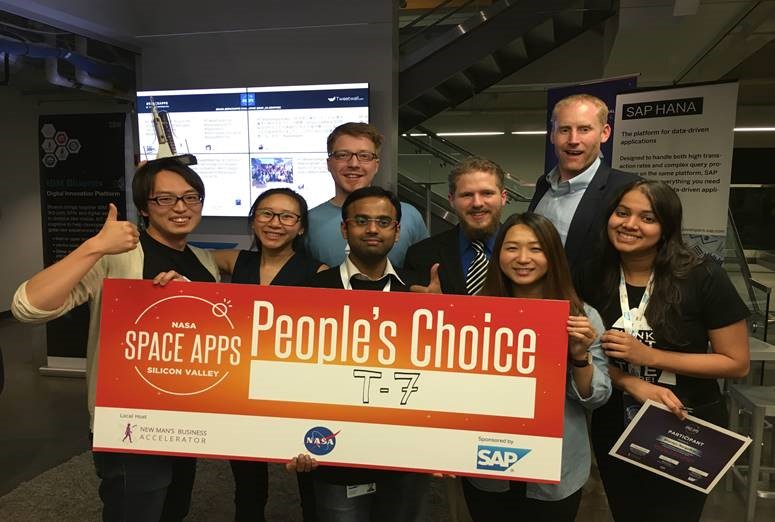 “We have you and your family covered from weather and illness around you. “Airie” is your health monitor and predictor, helping you to decide and prepare yourself in advance. Remember prevention is better than cure,” said Jitendra Sharma, “Airie” developer and Early Talent at SAP.

Sharayu Nargolkar, Jitendra’s colleague and also an Early Talent at SAP, added: “Helping people navigate through their everyday activities does more than convenience lives. Our vision for “Airie” is for it to be a mobile app that runs in the background of every mobile phone, allowing users to be better informed and to make better decisions!”

Up for the final round

This award on the local level is a great recognition for the winners, and a showcase of the talent at SAP Labs Silicon Valley. As a next step, the team is working on improving the application to accommodate great UX and encompass all of the discussed scenarios. The application is being enhanced for the second phase of the challenge with the ultimate goal to win the award in the same category at the global level. So let’s keep our fingers crossed and wish the winning team all the best for this second phase!