Purpose of this as follows :–>

The goal of this work is to create a new tool to find out the total query name where the same calculated and restricted key figures are used Calculated Key Figures CKF/ Ristricted Key Figures (RKF).

This initiative was born because recently we faced the same issue in production when someone has changed for example the structure of CKF Z_XXX_XXX in one or several queries and this change have produced an impact in the others queries that have a dependency with the modificated query.

Conclusions : Before making any changes in CKF/RKF (in fact in X or Y also) please use this tool to find out the dependency Queries and impacts. And then consult with leads and do the changes accordingly. Attributes of the Main Program: 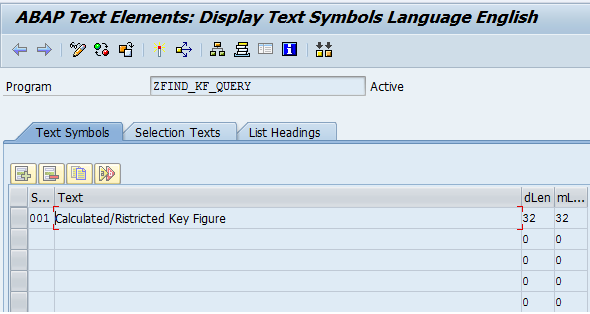 Step 1: Put CKF: Z_SUM_REV in the selection screen and execute this program.

Step 2: Now you can display the next output.

In That way you can find the dependency Queries name before any changes in CKF and RKF Key Figures. These program given as dependency query lists.

Custom Code should be as follows :–>