Scaling Design Thinking – An Interview with Phil Gilbert, Head of Design at IBM 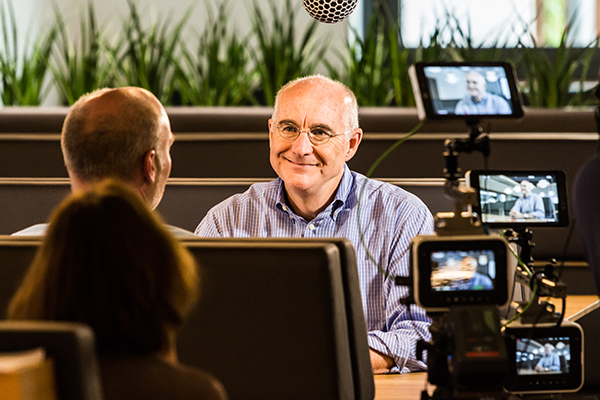 As head of design at IBM, Phil Gilbert leads a program of historic proportions to reinvigorate IBM’s business through the power of Design Thinking. Since his company was acquired by IBM in 2010, Gilbert has been executing on his plan to redefine how Big Blue, the inventor of commercial computing, develops its products and services. In a recent visit to SAP’s headquarters in Walldorf, Germany, we had a chance to ask Phil about design at IBM. This written interview complements the video interview below.

SAP: You’ve been visiting SAP for a two days now. Talking with employees and executives, touring spaces at SAP’s headquarters and our AppHaus in Heidelberg. What have been your impressions?

PHIL GILBERT: My visit to SAP has been incredible. It started at the AppHaus. It’s a magical place, and I loved the authentic reflection of the designers who work there. I encourage everyone who hasn’t been there to visit it.

We also had a discussion about the history of Design Thinking here at SAP. I believe it was 2005 when the first team started in Palo Alto and Walldorf. The history of the progression and the scaling that has been done here around Design Thinking is very impressive. It was much easier to start a program of Design Thinking in 2012 [when IBM started] than it was in 2005. For example, in 2005 the iPhone hadn’t even been released yet. The iPhone came in 2007. I don’t think people understand how far ahead SAP was in terms of bringing users’ experiences to the forefront of the conversation with clients and that’s made a huge impression on me. We all suffer setbacks and enjoy advances in any program on any given day, but there’s something that has to be in SAP’s DNA today that has been inculcated over this past decade. I really hadn’t realized how early it was and how deep it sits here. So it’s been really eye-opening and humbling.

IBM Design Thinking is the Design Thinking that everybody practices, but around that we put a few things that help us scale it to very large teams that are more complex than the typical smaller teams that Design Thinking was built to serve. Sometimes our teams can reach up to the hundreds by the time you include all of the things that need to be designed and developed and certainly when you include the other ecosystems of sales, marketing, legal, finance, and even partners, these teams can be very large and geographically dispersed. So one thing that we felt we could add to the design “literature” were techniques to scale it to environments like that. These techniques are fairly simple, lightweight and easy to understand, but they help larger teams use Design Thinking in different contexts.

You talked about scaling design with large teams, how do you ensure design quality?

I’m a bit of a pragmatist, and so I look for trends. I don’t look for absolute statements of quality. The world is moving toward a continuous delivery mode. This means that there will always be another version of something. And if you accept that human beings and their needs are more complex than you can ever fully understand, then you have to accept that whatever you deliver tomorrow is imperfect. Allowing yourself permission to accept that it is imperfect but better than it was, is freeing. That’s how we approach design – not as if there were an objective “good,” but there is a “better.” We are solving more problems for users and delighting users more than we did previously. We have mechanisms to collect the metrics to understand where we are improving or not. And that’s very important.  But again, we don’t really worry about judging whether something is some objective form of quality experience. We certainly are looking for that, but what we are really trying to embed in the program is a notion that we are always improving the experience.

How do you get engineers and others at IBM to understand that design is important?

When we started, our mission was to create a sustainable culture of design and Design Thinking at IBM. It wasn’t that design or designers weren’t valued, it was that it was unknown. We didn’t have a scaled out set of people who were formally-trained designers, so there was no way for the culture to value them. What we found was that once these new people started showing up, and they started practicing real, deep, thoughtful design, and the outcome of that design was actually things that our development population would love to build and deliver, the change was relatively easy. We didn’t have to change anybody’s mind about designers; we just had to introduce that skill at a world-class level and evangelize the outcome that the whole team delivered. 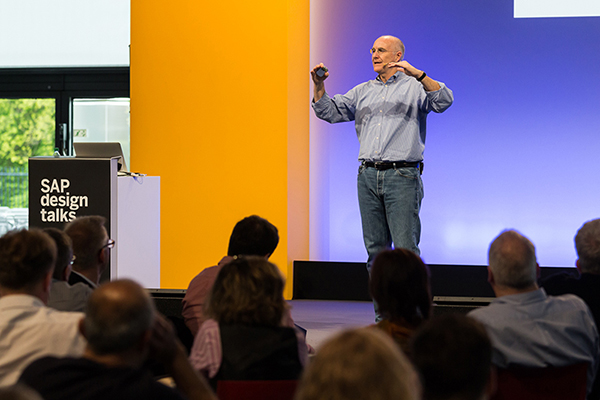 Like everyone nowadays, we are looking for T-shaped people. We want great generalists with a strong vertical.  But, I call out the user research discipline so specifically because it is the most transformative for those teams that really embrace it. And it is the most disruptive as well. The design research discipline is really interesting in our program because what they do is something that, when we started the program, very few people at our company would have understood as being “design.” By and large everybody could understand what the other designers do and what their contribution is. But people would be like, ”User researcher? What? We talk to users. We don’t need other people talking to users.” And so it’s very interesting when you introduce trained ethnographers that are unbiased and often times don’t have a lot of domain knowledge about a particular space. It’s scary to some people, because having these researchers go out and talk to real users in the real world on their own and bring back raw quotes and video shines a light on many biases that might have been accepted as truths. So I like to call that part of our design practice out, because bringing user researchers on board has been the most “non-design” thing that we have introduced, even though they are the heart of Design Thinking.

It’s been a pleasure and an honor for us at SAP to talk with you. Thank you so much for this interview.

This interview took place on the same day as Phil Gilbert’s SAP Design Talk. The series regularly brings leaders from the international design scene to SAP. The sessions are held on a large stage for an audience of employees at various SAP locations around the globe, like Bangalore, Montréal, or at our headquarters in Walldorf, Germany.

Many thanks to Phil Gilbert and IBM for sharing their time and insight.

3 Things to Look for in a User Researcher

What do designers at SAP do? Meet some and find out!