If you’re reading this, chances are you’re up to speed on digitization. But are you ready for digitalization?

What’s the difference? It may depend on your organization or industry. In some areas of business, the distinction is clear cut, while in other areas there is confusion over the two terms, with the result that they are being used interchangeably. In this blog, I will try to elucidate the difference in meaning so that you can use these terms with confidence.

The Wikipedia definition for digitization is distinct:  “…the representation of an object, image, sound, document or signal (usually an analog signal) by generating a series of numbers that describe a discrete set of its points or samples…strictly speaking, digitizing simply means the conversion of analog source material into a numerical format.” The Wikipedia definition for digitalization however, redirects to digitization. It’s a good beginning, but in the end it only reinforces the ambiguity.

The Gartner glossary goes a good step further in assigning meaning. It defines digitalization as “the use of digital technologies to change a business model and provide new revenue and value-producing opportunities; it is the process of moving to a digital business.” Similar to Wikipedia, Gartner also says, “Digitization is the process of changing from analog to digital form.”

“At SAP we’ve done digitization for many decades,” says Uwe Riss, Senior Researcher for Digital Business, Research & Innovation Hub St. Gallen, SAP, in a recent interview with SAP News titled Digital Business Modeling: A Structural Approach Toward Digital Transformation. “Now we are on the way to digitalization, which is different. Digitizing has increased the efficiency of our processes; digitalization means that business now uses technology to engage with people to precisely address their particular needs.”

Riss explains that it is digitalization that has the greatest potential to alter the way we live. “As a simple example, it can mean that an almost invisible technology helps us find the restaurant we like or the transportation we need, wherever we are and at any time – and at once.”

Searches on digitalization are on the rise

Ambiguity about the use of these terms abounds, nonetheless. A deep-dive into Google revealed that, although Google Search recognizes both terms, they are sometimes used interchangeably in search results – somewhat like synonyms. Search statistics can reveal a great deal about how terms are really being applied today.

The following graph shows a converging trend in interest over time, with digitization still the leading term people search on – although interest in digitalization is picking up. 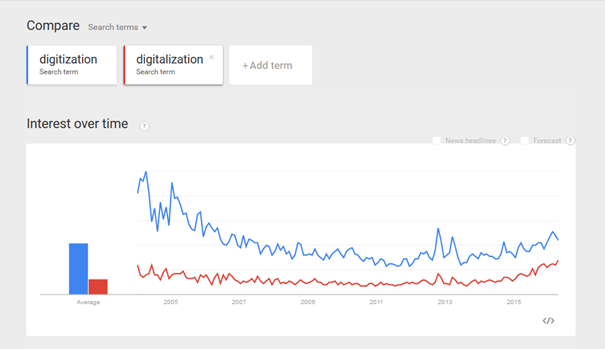 Satisfied that as an editor I could once and for all end all confusion between digitization and digitalization, I shared this research with my manager. As managers sometimes do, he confounded me with a simple question, “But do customers care?”

I had to find out. For this I needed an unsuspecting test subject.

At home in the kitchen, my husband was busy rushing back and forth, switching between spatulas as he prepared the kids their customized dinners. A CEO in a German Mittelstand company with a new, cutting-edge Industry 4.0-style factory – and an SAP customer – he seemed like a good person to ask: “Do you distinguish between digitization and digitalization?”

“As a physicist, do you see any difference?” Because sometimes physicists do see a difference that the rest of us may miss.

“Well – let me think for a moment – and not as a physicist,” he looked at the ceiling, drying his hands on a kitchen towel. “If I scan a document, I digitize it. But I would digitalize a factory.”

You tell us: Are you Digitizing or Digitalizing?

Now it’s your turn. How are you using digitization and digitalization in your business? Add a comment below to let us know.

Use the word your clients and customers are using.

Most neither know nor care about the difference (see you manager, husband and nearly any web site of the multinational digitalization companies).

So why not keeping everyone happy by using their preferred wording?

They know their pain points, problems, challenges, needs, wishes, desires, solutions,.... and will connect with their wording exactly this - YOU as specialist and trusted consultant knowing what they need and want, giving them the for them and their project and environment perfect solution.