Happy May Day and welcome to the May edition of my monthly KM and WPC update! This month I have a roundup of new Notes and KBAs covering topics such as services failing to start up, XML Forms and the Forms Builder, and a new development relating to WPC and the Portal Activity Report. The monthly Hot Topic is the creation and restoration of KMC configuration backups where I detail both the reasons these should be carried out regularly, and some of the scenarios in which these might be required. Enjoy!

This KBA describes an issue that might be encountered if accessing the portal through HTTPS protocol. If the ‘Host’ parameter in the URL generator service is configured with HTTP then a connection error eith the server might be encountered when attempting to run the XML Form Builder.

In this KBA, I’ve described a startup error which might occur in relation to the pipeline service, especially after upgrading the portal environment. Should the pipeline service fail to start, you might see some issues with rendering XML forms and WPC content. The root cause of the issue is related to the ‘Wiki’ pipeline add-on which was present in older systems but has been deprecated in EP 7.30 upwards. If the pipeline service was configured with this add-on activated and you upgrade to EP 7.30 or higher, the configurable may still be referenced but can no longer be found by the system. This will cause the service to fail startup and can be resolved simply by removing the ‘Wiki’ processor from the configuration of the service.

This Note is related to an issue whereby XML Forms are displayed in the KM repositories by their technical ID rather than the displayname and when clicked on, the source code is displayed instead of rendering the actual form. It’s important to be aware of this issue as the symptoms are almost identical to those seen due to Metadata loss for files stored in an FSDB or Filesystem repository. In this case however, the issue only occurs when versioning is activated on the resource. Checking the versions of any effected files, you should see one version showing with the correct displayname but all other versions will be shown by their technical ID. The issue requires a code correction contained in the patch versions outlined within the note.

This relates to a locking issue which may occur in the RidId service, the impact of which might affect portal performance or even result in the system becoming unavailable. Locking issue are often caused by Hot-Deployment but the note outlines which SP releases are affected by this issue as well as the exact exception stacks which will be generated in the trace with which you can identify this issue. Again, a patch fix is required to correct this issue.

This issue with the approval service occurs when you attempt to assign a user as an approver. The system may return a ‘User/Role/Group do not exist’ message despite confirmation that the user or role does indeed exist. The issue is quite unusual however as there is one prerequisite which met for it to occur – the name of the principal involved must start with 4 characters followed by a dot, then another unspecified number of characters and a second dot. For example, Test.Testing.user

This is a KBA which outlines an issue which may be seen in relation to KM Collaboration but the actual cause of the behaviour comes from the Framework page configuration. This issue only occurs with the AJAX Framework page (AFP). The issue results in a ‘HTTP 500’ error being displayed when attempting to open the ‘Project Document Viewer’ in KM Collaboration. This KBA outlines the configuration steps required to be implemented in the AFP to prevent this from occurring.

Whether using the original Web Page Composer application or the newer, more comprehensive WPC 2.0, it has never been possible to include WPC resources (pages, iViews, etc) in the Portal Activity Report. However, this is now set to change. This note details from which SP versions and patch levels you’ll now be able to include Web Page Composer content monitoring via the Enterprise Portal Activity Report.

If using Composition Environment (CE) NetWeaver 7.3, 7.4 or 7.5, the WPC SCA files will not be automatically deployed. You may then encounter some portal side errors due to missing portal content. The reason for this is that the ‘initialPermissions’ process tries to set permissions on a folder that is created only when deploying WPC. If this is missing, this issue may result and this note outlines both the steps required to correct the issue as well as the exceptions that will be generated in the default.trc file if this is indeed occurring.

Monthly Hot Topic – Backing up your KMC configuration and content

I cannot stress just how important it is to regularly back up both the KMC configuration and the DB on which most of the KM content is likely stored! There’s nothing worse than encountering a scenario (especially in a productive system) where the only option available to correct a problem or recover some accidentally deleted content is to perform a restore of a backup, and to then discover that no such backup exists. While we recommend implementing some sort of a backup schedule whereby this content is backed up at regular intervals, it is especially important to ensure a backup archive is created in the following cases –

During the time I’ve spent supporting the KMC component in SAP, I’ve encountered many scenarios where it was necessary to restore a KMC configuration archive but by far, the most common reasons are as follows –

The last of these (the metadata loss), is especially prevalent when using CM repositories running in FSDB mode. When using FSDB persistence, folders and documents are stored in the file system and metadata is stored in the database. The database is activated automatically if data is added or removed from the file system. The ‘Disable Automatic FSDB Synchronization’ parameter in the configuration of the repository manager determines whether this takes place or not. If you edit or manipulate documents or folders directly in the file system you run a serious risk of losing metadata (which can only be recovered by restoring a backup).

How to create and restore backups of the KMC configuration?

The following are the steps required to create a KMC configuration backup in an EP 7.30 or 7.40 system. See the linked Notes and resources below for further details on how to perform the same in an EP 7.0X portal environment.

These steps are also outlined in greater detail in SAP Note 1571384 – Backup and restore of KMC configuration in SAP NW 7.3

To perform the same in EP 7.0X, see the steps outlined in SAP Note 1000150 – Backup of KMC configuration 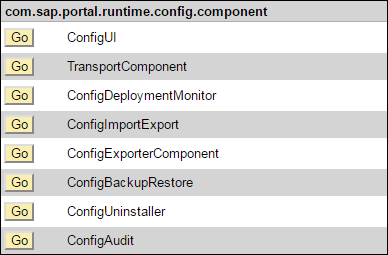