Building up a culture of sustainable design at a behemoth like IBM is a big job, but not too big for Phil Gilbert. As head of design at IBM, Phil Gilbert leads a program of historic proportions to reinvigorate IBM’s business through the power of Design Thinking. Since his company was acquired by IBM in 2010, Gilbert has been executing on his plan to redefine how Big Blue, the inventor of commercial computing, develops its products and services.

Not only is IBM in the process of hiring over 1000 new designers, but each one attends a rigorous 3-month Design Bootcamp. Here “cohorts” take part in an accessibility hackathon for one week, a smaller project for one month, and finally an incubator project for seven weeks. Participants also attend workshops to learn about key aspects of the design process and plan their personal career path. In addition to the bootcamp for new designers, there is a week-long Design Thinking training for whole product teams and a full-day design workshop for executives.

IBM, however, is hardly new to design. Sixty years ago, in 1956, Chief Executive Thomas Watson Jr. hired Eliot Noyes, a renowned architect and former curator of industrial design at New York’s Museum of Modern Art, to be the company’s design consultant. Noyes called upon the day’s big names in design to turn IBM into the benchmark of modern corporate design. But, as the decades marched on, IBM’s commitment to design faded. Speaking at the most recent SAP Design Talk in Walldorf, Germany, Gilbert readily admits, “At some point, we lost it.” He then adds cheerfully, “But now we have it back.”

And indeed, they have it back big time. Gilbert emphasizes a culture of communication, trust and skill building, “We used our power to give employees safe spaces and permission to do the right thing.” 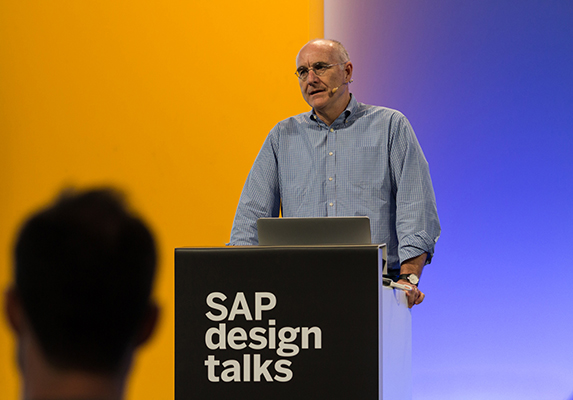 As for any company “of a certain age,” the business goal is for the sale of new products to outpace the declining sales of older products. “The most reliable way to do that is by putting the user in the center of everything we do,” asserts Gilbert. Perhaps it is because he is not a trained designer, but a successful entrepreneur that Gilbert chooses to focus on outcomes instead of design. He proved to IBM’s leadership that by adding designers to the product development mix, R&D costs could be reduced by up to 30%.

And this is perhaps the secret to his success. Gilbert formulates it like this, “people + practices + places = outcome. If you want to change the outcome, you have to change all three of these things.” And so, by training employees and hiring new talent (people), sharing practices for agile execution focused on user outcomes (practices), and fostering collaboration and creativity with modern studio spaces (places), IBM has been transforming its outcomes and its entire business.

Want to hear more? Watch this 5-minute video in which Phil talks about design and explains why he thinks that Design Thinking is the scientific method for the 21st century:

The SAP Design Talks regularly bring leaders from the international design scene to SAP. The sessions are held on a large stage for an audience of employees at various SAP locations around the globe, like Bangalore, Montréal, or at our headquarters in Walldorf, Germany.