Video Game Orchestra, Kickstarter and the Phantasmagoric Disruption of the Music Industry 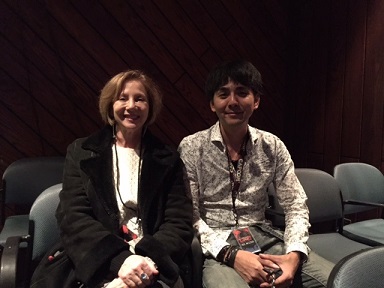 It was impossible not be thrilled by the sights and sounds of the Video Game Orchestra’s (VGO) recent performance at the Berklee College of Music.  Picture, no feel, 30+ musicians on stage rocking out against a backdrop of pulse-pounding, phantasmagoric video imagery that ranged from epic good vs. evil battles to preciously animated cats and dogs frolicking in idyllic utopias.

I first blogged about VGO after the group used Kickstarter to fund its debut album, Live at Symphony Hall, exceeding its $30,000 target. Kickstarter was just three years old, and I attended VGO’s second concert in Boston. Fast forward to 2016, VGO was back in town earlier this month, where I met with the group’s producer, Shota Nakama, (pictured with me at right), on the eve of said concert at Berklee. Fresh off two sold-out shows in China, which was part of the group’s CAPCOM LIVE! tour, 34-year old Nakama was humble to a fault as he described VGO’s odyssey to international renown.

“Without our fans we wouldn’t exist. They’re really part of us, and we do things for them because they are so important. It’s like one big family,” he said. “We want to give fans a one-of-a-kind music and entertainment experience even as we grow step by step.”

“It’s difficult to raise that much money without having some kind of platform, especially when you’re doing a CD project. It has proven there is a massive audience for us, and we’re getting so many messages from all over the world from people who are happy with what they saw. We’re sort of still indie but sort of big too, and are experiencing the benefits of both worlds,” said Nakama.

Some people may view the decline of CD sales as a negative, but not Nakama. He sees the music industry experiencing the same digitally-induced growing pains as most other sectors. His advice for musicians is applicable to aspiring stars in any sector – consumer or business. Figure out how to shape the DIY business model to your advantage. 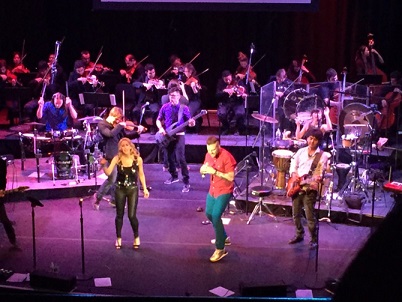 “The music industry hasn’t shrunk, and is finding a way to establish the next business model. The concert business has exploded along with online subscriptions,” he said. “What matters most, and more than ever, is creativity. You have to find out why you’re special, and how to utilize technology to promote and sell your creation. Twenty years ago you had to be working towards getting signed with a large company to make it big. Now you can make it big on YouTube, Instagram, Facebook, everywhere.”

With gig inquiries pouring in from Asia, Latin America and Europe, plus ongoing recording sessions and concerts, Nakama promises to keep surprising fans with more “good stuff.” After I talked with him, VGO went on to headline PAX East, a premier gaming event in Boston.  As for Kickstarter, there’s plenty to celebrate on its seventh birthday — 11 million people have backed projects pledging a grand total of over $2 billion to fund over 104,000 projects, and counting. As Nakama said to me, “When there is a change, there is a chance too. Whether you can grab it or not is up to you.”

What video gamers can teach business about innovation